"Dirty gem"
A satanic rock star, a driving instructor with paranormal powers and a widower must face very different demons, in this spectral comedy from Ireland - now available on VoD

In a rural Irish town, Rosie (Maeve Higgins) runs a driving school. One of her passengers, the eligible and handsome Martin (Barry Ward), turns to her to ask her to speak to his dead wife. The daughter of a clairvoyant, Rosie has ceased to use her powers since she accidentally killed her own father. Unknown to both of them, Christian Winter (Will Forte), a Rockstar hunched up in his castle long past his prime time, has entrapped Martin’s daughter in a spell, hoping to sacrifice her pure soul for returned chart success. Reluctantly agreeing to Martin’s request, Rosei re-opens her abilities to talk with ghosts, and by doing so, opens herself to love.

This is a very bizarre and twisted 90-minute comedy, which at one point sees a floating goat explode in front of a congregation of shocked passers-by. Elsewhere, a recycling bin haunts an old woman while Bonnie, Martin’s deceased wife, haunts both her widowed husband and Rosie. Just as Rosei learns to let herself go, so too does Martin, in an effort to rid himself of his wife’s image. These attempts to self-exorcise results in her presence within his body, Ward switching from bewildered husband to possessive, cigarette chomping wife with slapstick brilliance. 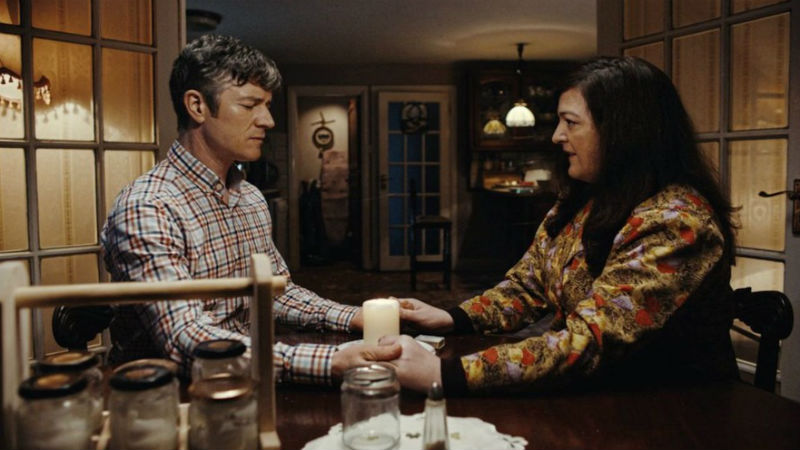 Less successful is Winter, the emaciated rock star desperate to return to the top of the charts. His flirtations with the dark arts leads to a litany of tiring phallic jokes, especially when his girlfriend refers to his magic implement as the “dick stick”. Much better is his rendition of Cosmic Woman, an eighties synthpop track which shows Winter crying out in excessive rock regalia. His treatment of women echoes the thinly veined misogyny eighties rock stars display on a daily basis, though the way in which he rids himself of his clawing girlfriend might shock some viewers.

And yet there’s a lot of heart to the film. A lowly image of Martin serenading his slumberous daughter (trapped in Winter’s spell) is strangely potent, while Rosie, lonely as she has been the whole film, falls delightfully in love with her companion. All of which leads to the haunting finale, as Winter serenades the dark lords to savour his virginal sacrifice. The libidinous punchline that ends the scene is a very funny one, though the hammy special effects are painful to sit through. There are too many dick jokes leading to the climax. Never the less, one of the more inspired Irish comedies since Sing Street (John Carney, 2016).

Extra Ordinary is out in Irish cinemas on Friday, September 13th. On VoD in the UK and Ireland in April!

When Pete and Omar lose their beloved Gran they go in search of Omar's estranged father, confronting him on the day of his daughter's engagement party - now on VoD and DVD [Read More...]