"Filthy genius movie"
Isolated in doctrinal solitude, a beekeeper’s earnings are threatened by the passage of time and family, in this quietly exuberant doc in the mountains of North Macedonia - now available on VoD

This movie isn’t intended for mainstream audiences. Instead, it’s the hypnotic spectacle of the call of the bee. Silently, it opens on a woman, wading as she does to the hive, hiding from the camera’s reach. The lure of the bee sting sticks to their yellow shelter as the victor holds her treasure trove to the watchful camera. That an aspirational action of visual response should open the film comes as no surprise in an 80-minute mantra of silent, hopeful treats.

Nestled as she is with the bees of the Balkans, Hatidze Muratova lives in the hills, free from the constrains of electricity. Aiding her ailing mother, Muratova continues the lineage of bee-keeping by saddling the honeydew to sell in a village four hours walk away. Only the arrival of a rambunctious family, their roaring engines battering through the called airwaves, changes her meditative life, continuing the filmmakers journey to separate the mechanical from the natural. The film acts as visual poetry, sectioned as it is in unconventional norm. Muratova, the single woman, holds her pride as Hussein Sam, the proud family man surveying empty hungry mouths, competes with her income as honey-maker. It’s the battle of the sexes, the battle of equality, material modernity making the struggle more tangible for the viewer. 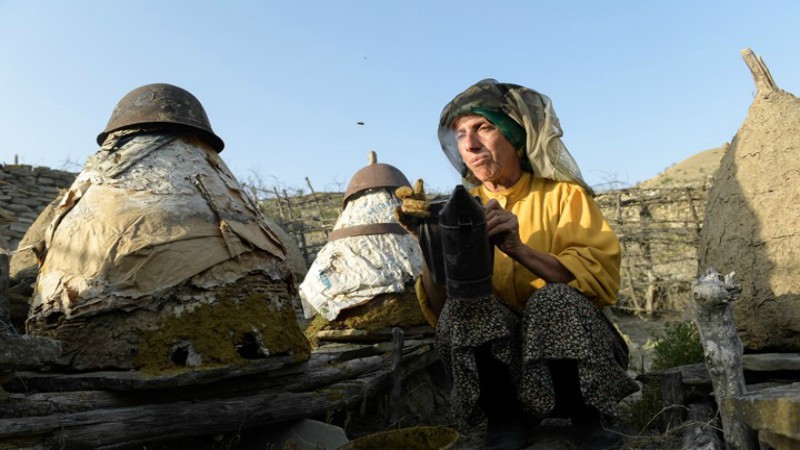 Superficial sympathies lie with Muratova, a practitioner with an ageing mother and attentive pup to care for. And then there’s Hussein, who works through his internal disrepair by repairing the destroyed iron cattle modes of transport. Acting as he does as entrepreneur is more practical than Hollywood Machiavellian. One long shot details the worries Muratova holds towards these new guests, tactfully, courtesies are made by all concerned. Though the story can be told in paragraphs, the film’s true strengths come in the doctrinal dealings of a tradition practised in antiquated reverie. The symbolism is cryptic, rife, sweet.

Directors Tamara Kotevska and Ljubomir Stefanov directed the lightly lit naturalistic drama over a three year journey, carefully shared as it is to its audiences. In their ventures, they expose the courage, contradictions, characters and courtesies of a daily life. And as such, it measures a poetry in visual form. Staggering cinema.

Honeyland is in selected cinemas across the UK from Friday, September 13th. On VoD in January 2020.