"Filthy genius movie"
Superb documentary reflects the past, present and future of the Durham Miners' Gala and labour movement, whilst following four protagonists over the course of this impressive working-class occasion - now available on DVD

Though ideologically different to The Big Short (Adam McKay, 2016), The Big Meeting bears more than just its first two words in similarity. Where Adam Mckay gave his sermons through a tasty portrayal of a bubble bathed Margot Robbie discussed the deductions global economics entails, The Big Meeting opens its treatise with a taste collection of colourful projected clips detailing the history of “precarious capitalism”. Through an inspired rotary of smoky factory chimneys, the documentary details the importance the people held over the capital which burned and killed them. A creative breath of fresh air for the left leaning intellectual viewer.

Through their own paintings, director Daniel Draper and company uncover a Durham cognisant and proud of their mining history, picturing an ageing teacher learning a brass instrument through the local brass orchestras, a 19-year-old Oxford student applying her own philosophies into a community bookshop while another virile man proudly shows his camera the “Still Hate Thatcher” badge that pins on his lapel. Though the banners and flags bear an unfortunate resemblance to The Orange Order’s militant vignettes, the local demonstrators demonstrate a loyal welcome to their community with a generosity that puts the loyalist armies drumming their forefathers killings to shame. 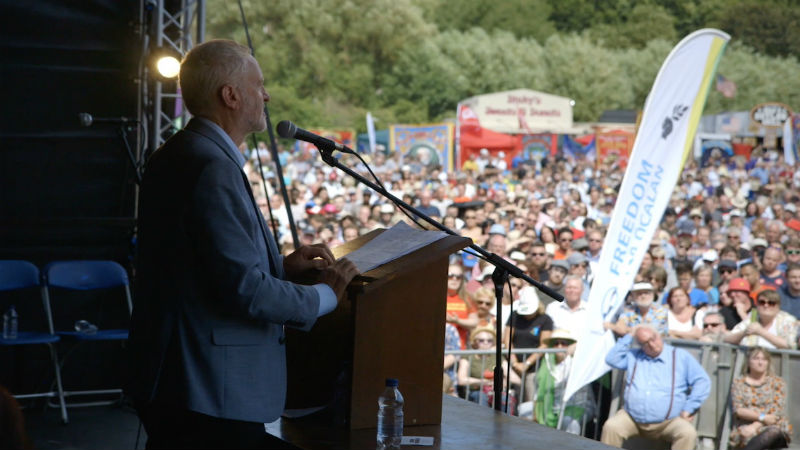 An annual celebration held every July, the film understands the evolution of the parading since 1871. Past paintings are collected in a book as an art historian informs the audience that only six of the 40 odd painters still breathe since signing their materials in 2002. Jeremy Corbyn and Ken Livingstone discuss the importance the Durham galas holds in their thoughts, both of them committed to their left wing principles at a time Tony Blair had few morals left. Political savants James Connolly and Tony Benn are referenced showing how the Durham parade welcomes the class struggle across globally rather than locally, while presidential hopeful Bernie Sanders videos himself commending the collective efforts of those who attend, as another politician notes that his 2016 speech wasn’t aimed at those who attended, but those who would and those who did attend at past galas.

Through their walks, the paraders experience history and through the assemblage of takes, paintings, portraits, parables and positions, audiences experience it alongside. It’s one of the more remarkably visceral documentaries, contextualising a struggle situated in everyday standings. And there’s a satisfaction to it unseen in McKay’s airier The Big Short.

The Big Meeting is in cinemas Friday, September 6th. On DVD in January 2020.

How do you sabotage a nasty dictator like Pinochet? These four Scottish Rolls-Royce factory workers had a very peculiar and effective idea - join the watch party on Sunday, April 5th [Read More...]

Doc about the iconic "hard-left" Labour politician from Bolsover is insightful and engaging, but it also slips into clichés and neglects urgent topics - now on DVD [Read More...]