"Dirty gem"
Grace has to hide from her murderous in-laws immediately after her luxurious wedding, in this American blend of black comedy and horror - now available on VoD

Each film festival will feature the proverbial “big-hitters”, which come with the question mark of whether they will sink or swim in the waters of the audience’s response. Surviving or not is a fitting analogy for a film centred around a game of hide and seek with deadly intentions. Ready or Not does not disappoint, and in the context of its own survival as a piece of filmmaking, it also goes so far as to protect the interests of studio horror in a line-up surrounded by independent genre films.

Grace (Samara Weaving) is not only marrying fiancé Alex (Mark O’ Brien), but is becoming a part of the rich and eccentric Le Domus family, owners of a grand old games company. Fittingly, the family have a traditional ritual when someone new marries into the family – they play a game chosen by chance. Unfortunately for Grace, the card she picks is hide and seek, and soon whether ready or not, the bride learns that the rules of this game are far from harmless.

Ready or Not belongs to a rich heritage of storytelling, of an individual in a life and death struggle, films that include Hard Target (Joh Woo, 1993), Battle Royale (Kinji Fukasaku, 2000) and You’re Next (Adam Wingard, 2012), as well as Beyond the Reach (Jean-Baptiste Léonetti, 2015), based on Robb White’s 1972 novel Deathwatch of man hunting man after the one witnesses the other commit murder in the Mojave Desert. 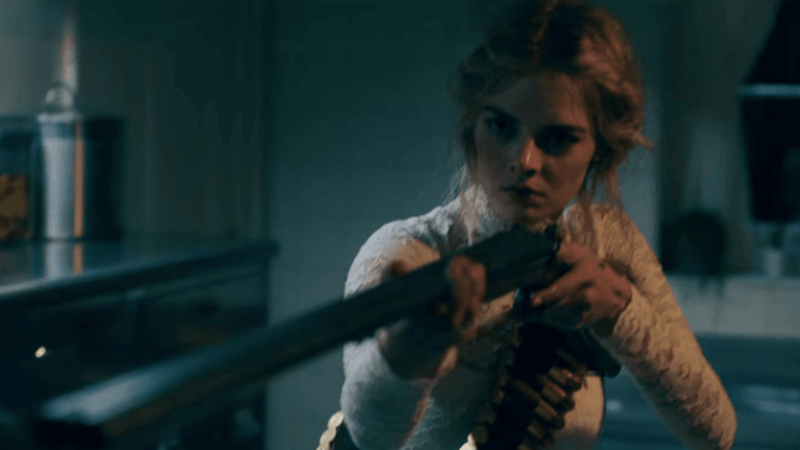 Comparisons can also be drawn to the Western genre that centres around a violent and adversarial confrontation – the hero or villain exerting his will by mastering the other one’s propensity for violence. Not dissimilar to the Western hero, Grace conforms to a traditional concept of the hero who tempers her own propensity, while those around her embrace theirs with narcissistic indifference. Bettinelli-Olpin and Gillett’s film features shades of the Western, while the base plot of whether Grace survive a violent situation is in keeping with the spectacle of violence in action and horror genre cinema.

Weaving is perfectly cast, who in her wedding dress and make-up looks in one respect dainty and fragile, yet her attitude and words show a less lady-like edge to her personality. With expressive eyes, Weaving conveys her emotions without a reliance on words, and in a story driven by action and not conversation, this is to her character’s benefit. What makes her character so compelling is not juxtaposing her vulnerability and strength, but more the childlike moments at play before understanding her peril. Grace’s look and journey offer up comparisons to the culling of innocence in the fairy tale, accentuated by the bride in white as a symbol of innocence. This forges a visceral meeting between innocence and maturity, while her in-laws resemble adolescents, who with an air of farcical superstitious fear that lies behind the game of hide and seek, lust not after sex, but bloodshed.

Directors Bettinelli-Olpin and Gillett show an appreciation for the value of humour. Whether the focus is on hunters or prey, there is a comedic heartbeat to the film. Humour can make a film both memorable and re-watchable, and the directors intertwine the spectacle of violence with frequent beats of humour. On a meta level, the humour becomes a communicative language that breaks the fourth wall because the film does not either try to, or ask us to suspend our belief entirely.

By now, the language of a film such as Ready or Not has bled into the characters. There is a conscious awareness transmitted by the filmmakers and the cast, or rather here we can sense a playful warmth of the familiar beats struck to the humorous interrogation of the rules of its own world, that leans towards self-consciousness and flirts with becoming a spoof. This is at the very heart of the pleasurable experience that is Ready or Not, where the humour becomes the proverbial wink from storytellers and characters, acknowledged by our smiles and laughter.

Bettinelli-Olpin and Gillett know the film they want to create. The two directors make no apologies for leaning towards the spectacle of superficial pleasure. Character back stories such as Alex’s self-exile from his family, his brother Daniel’s (Adam Brody) cynical feelings towards his dynastic family, and his sister-in-law Charity’s (Elyse Levesque) determination that she will not return to her impoverished past, all offer something of value. The ideas of the family as a source of one’s identity, what people are able to live with knowing about themselves and our drive for self-preservation are all introduced, while Grace’s desire to become a part of a family speaks of our inclination to belong.

These may only be passing thoughts that are never developed on a thematic level, and yet we nonetheless perceive these doorways to themes even if they remain sealed. These passing thoughts amidst a plot-driven reverie of violence and comedy speaks to films such as this being repressive acts – repressing the natural inclination of story and characters to not only be superficial. Ready or Not stimulates its audience on an experiential level, and while knowing how to play with a humorous self-awareness that effectively flirts with spoofing, even if a repressive act, it does not diminish the pleasure it evokes and its success as a commercial genre filmmaking.

Arrow Video FrightFest hosted the UK premiere of Ready or Not. The film will be released theatrically by Twentieth Century Fox on Wednesday, September 25th. On VoD in April!