"Greasy movie"
See the Cathedral in its full glory for the last time in Valérie Donzelli's latest film; a breezy French comedy about womanhood and architecture - live from Locarno

The old cliché that no publicity is bad publicity certainly rings true with Notre Dame, the latest breezy comedy from French auteur Valérie Donzelli. She could’ve had no idea while making the film that ancient church’s roof would set ablaze on April 15, making her latest work something of an accidental bittersweet lament for the France’s most enduring symbol.

The burning down of the French cathedral was immediately seized upon as a symbol of the deterioration of France; another debilitating sign, along with Islamist terrorist attacks, the rise of far-right nationalism, the Church sex abuse scandals and the Gillet Jeunes protests, that this is a country slowly losing its way. And Notre Dame eerily captures this downbeat spirit, displaying a capital city and country uncertain of itself, paranoid and on edge. The French Open has been inexplicably cancelled, Lake Annecy has dried up, people randomly slap each other in metro stations, refugees sleep on the streets, and Paris is endlessly drenched by torrential rain. To rally spirits once again, the mayor calls for a “Grand competition for the Grand dame”, putting out an open call for a new esplanade design.

Our unlikely hero Maud Crayon (Valérie Donzelli herself) — built in the mode of Woody Allen’s early comic nebbishes — may be an architect but has little intention of entering the contest herself. She’s too busy paying off her debts, battling with her boss, trying to get her kids to school and finally kicking her ex-husband (although they haven’t signed the divorce papers) out of her flat. Then in a moment of sheer, unexplained magic, her design for a playground mysteriously floats out of her flat window all the way to the mayor’s office. The bold design is picked as a new way forward for the city and she’s instantly put in charge of the most important project in all of France. 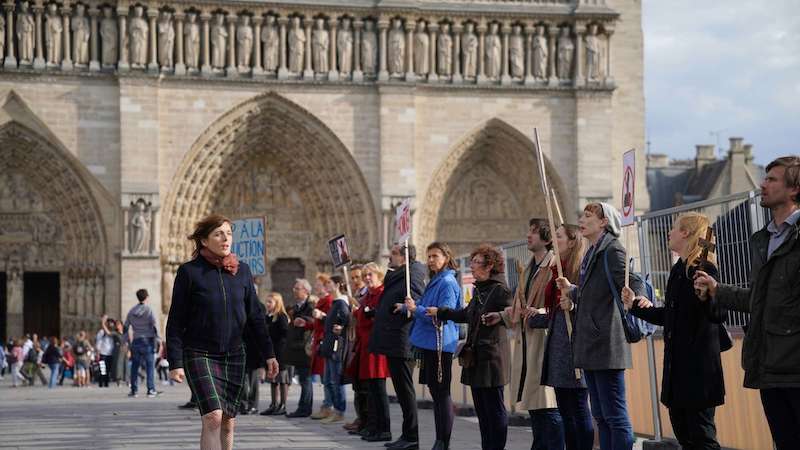 Given that the Notre-Dame itself took one hundred years to build, this premise would be enough conflict for an entire TV series, let alone a zippy ninety minute movie. But Maud’s travails don’t stop there. Firstly her ex-boyfriend (Pierre Deladonchamps) comes back as the journalist covering her story, secondly she finds out she’s pregnant, and thirdly she must contend with her ex-husband trying to win her back. Underscoring this theme, her daughter acutely asks her: “Why do women have to do everything?” To make matters worse, it turns out her design looks kinda like a phallus (the jokes aren’t subtle here), sparking outrage across the nation, and calls for construction to be indefinitely postponed.

France has a fine tradition of protesting its finest symbols. The construction of the Eiffel Tower was once petitioned against by writers as influential as Maupassant and Dumas. Likewise Mitterand’s Grands Projets was looked upon at the time as a sign of grandiosity. Yet now it would be hard to imagine the Paris skyline without the Eiffel Tower or the Louvre without its pyramid. The sheer absurdity of Crayon’s design is the point: showing through satire how even the most outlandish designs should be encouraged due to the way they can help establish and reinforce a city’s unique identity.

Yet if anyone is expecting a serious inquiry into the nature of architecture, they will be sorely displeased. Donzelli’s work is gleefully self-centred, neurotic and strange, casting herself in goofy, off-the-wall tales that make Amelie’s escapades look normal and well adjusted. Notre Dame has a childlike yet bawdy spirit, throwing in the entire kitchen sink, including musical interludes, silent movie homages, quick verbal barbs and politically incorrect sex jokes. Thankfully the movie, flawed as it may be, is inherently enjoyable, Donzelli’s bizarro charm proving infectious and her style strong enough to overcome any imperfections.

At the end of the day, its not really about the Notre-Dame at all, but a woman coming to terms with the chaos of her life, the power of great responsibility, and figuring out what’s actually important. It’s just ironic that Valérie Donzelli will be suddenly thrown into the spotlight due to an event completely out of her control. Talk about life imitating art!

International Sales are handled by Playtime. The film is scheduled for release in France only so far, on 18 December 2019.