"Dirty gem"
7500 breathes new life into the plane hijacking thriller by confining all the action in just the cockpit itself. This is one wild ride you won't forget!

The limited thriller has been growing in popularity in recent years. Whether its the police responder drama The Guilty (Gustav Möller, 2018) or the man-in-the-car-with-great-phone-reception talkie Locke (Steven Knight, 2013), the thriller has been pushed further and further in terms of doing more with less. You can now count 7500 — referring to the code pilots used when being hijacked — on that list, a German production that reinvents the wheel by trimming it down to the absolute barest essentials.

Bar a few opening scenes via CCTV, the entirety of the movie’s point-of-view is from the cockpit of the airplane. Once we are in the cockpit of a plane going from Berlin Tegel to Paris, it starts with almost rigorous realism; both the pilot (Carlo Kitzlinger) and his first captain (Joseph Gordon-Levitt) going over in fine detail about procedure that no one but a pilot or radio controller could understand. Taking place in almost real time, 7500’s premise isn’t very subtle. We know from the beginning that there will be some kind of Islamist threat, it’s how it goes about it that makes it such an entertaining, turbulent ride. 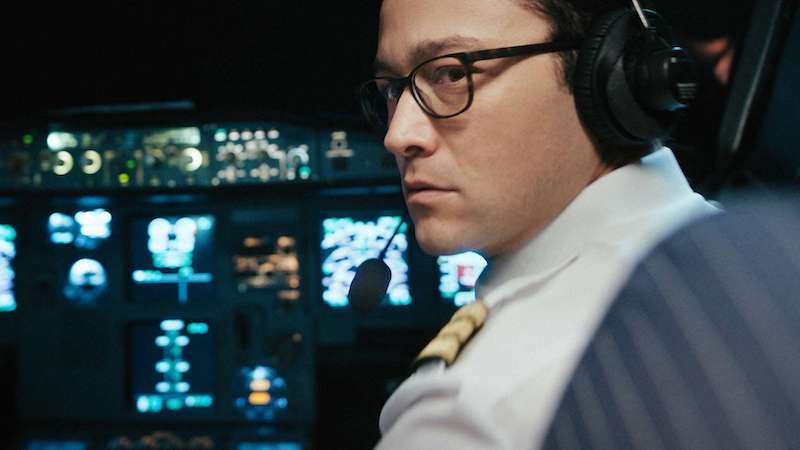 Patrick Vollrath and his cinematographer deserve credit for keeping things interesting inside such a close space, quick exchanges of point-of-view, insert shots and close-ups allowing momentum to continuously build. This is all edited with invisible precision, easily allowing us to go along with the plot despite the limited amount of scenarios that are possible. All extraneous cutaway scenes plane hijacking thrillers are known for — such as the control tower going haywire, the police chief facing a difficult decision, or the accompanying fighter jets — are completely missing, referenced only through radio and seen through the plane window. This works very effectively because a) these scenes are almost always completely rote anyway and b) they allow us to use our imagination instead, making the film far more unpredictable and enjoyable.

All in all, it’s an almost perfect pure thriller, with the extra thematic elements — such as the threat of Islamic extremism and German-Turkish conflict within cities like Berlin — almost completely unnecessary to the plot itself. These hijackers could’ve been far-right fascists, money-grabbing freeloaders, Quebec nationalists, or pro-Brexit extremists and the film would’ve worked in almost exactly the same way. It’s a little bit of a shame that in a post-9/11 world that the de facto plane hijackers are still Muslim when there are so many conflicting ideologies across the world ready for adaption, but this plot is really just a threadbare line to hang the enjoyable ride upon.

Ultimately this isn’t a film about themes; this is a film that rests purely upon style and succeeds tremendously. With Joseph Gordon-Levitt in the main role, 7500 has the potential to be a breakout hit. While his Americanness doesn’t add much to the screenplay — which in fact may have worked better if he were simply a white German — his recognisable face and over-the-top acting style perhaps tells us much more than a lesser name could. It also means that it has more potential to be seen. Let’s just hope its rollout isn’t as limited as its premise.

7500 debuted to strong acclaim in the Piazza Grande open-air section. Amazon Studios are helming this one in all territories apart from German-speaking regions. Expect it in a cinema near you!