"Dirty gem"
Man's cruelty to man's best friend is merciless exposed in Russian film Space Dogs, one of the most bizarre documentaries ever made! On Mubi in September

For mankind to see if it could survive the perils of space exploration, it tested one of its first flights on a dog named Laika. She made it into space but was incinerated upon re-entry into the earth’s atmosphere. This is depicted in Space Dogs with a 2001: A Space Odyssey (Stanley Kubrick, 1968) inspired level of wonder; both in its epic range and its psychedelic play of sound and colours. Yet this violent and strange beginning is only a harbinger of what’s to come: a very weird deep dive into man’s worst tendencies to man’s best friend.

This is unlike any documentary I have ever seen. Part obtuse-Angela Schanelec movie, part Stalker (Andrei Tarkovsky, 1979), part Aleksey German Jr’s Under Electric Clouds (2015), it’s a fragmented, overly repetitive and narratively angular depiction of stray dogs living in Moscow intercut up with an essayistic exploration of the Soviet Space program. While not everything works — some scenes are simply too long to keep us engaged — duo Elsa Kremser and Levin Peter deserve credit for the boldness of their vision and the steadfastness of their execution. 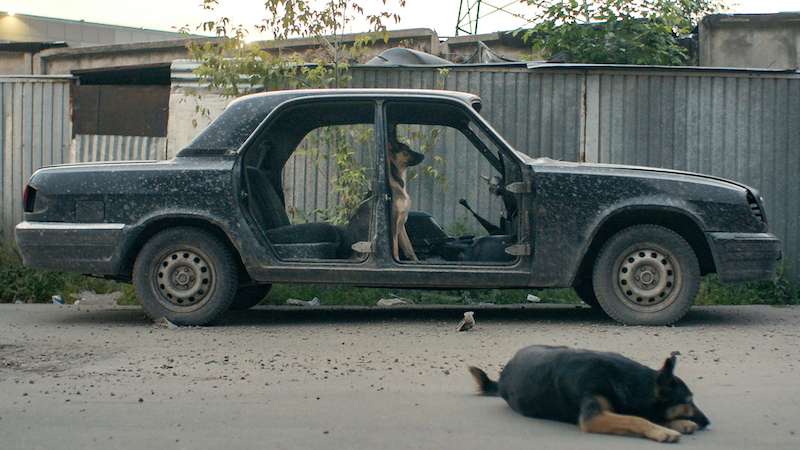 By far their biggest score is the narration by Russian veteran Aleksey Serebryakov — best known for McMafia (Hossein Amini and James Watkins, 2018-) and Leviathan (Andrey Zvyagintsev, 2014) — whose unmistakable timbre lends the film a certain authority and tragic inevitability. He recounts the legend that Laika didn’t permanently disappear but actually returned to the streets of Moscow as a ghost. Our hero in this “documentary” is also a Laika— who either is the Laika herself, a descendent of the Space Program dogs, or another dog entirely — who endlessly roams the wide avenues of Russia’s capital, finding little respite from man’s eternal cruelness.

Space Dogs often films these animals from the ground, allowing us to imagine life from their perspective. In comparison, the momentous tower blocks and orange-tinged sky of a relatively unpeopled Moscow — filmed in the dusk and dawn — creates a sense of unreality and oppression that the main Laika and its roaming gang of companions simply cannot escape. Like the best of Soviet science fiction, the concept of space travel and exploration is something of an Escher’s staircase, looping back to humanity itself, and its own seemingly unsurmountable issues.

The film debuted at the festival with a very apt content warning. If you are in anyway an animal lover, Space Dogs is a relentlessly difficult watch. Yet I felt that its very dedication to exposing man’s absolute cruelty to his kindest animals achieves a bizarre kind of moral. It’s closest comparison might actually be White Bim Black Ear (Stanislav Rostotsky, 1977), a Soviet doggy-centric take on Au Hazard Balthasar (Robert Bresson, 1966) that is even more heartrending due to its manipulation of the audience’s hopes and dreams. Yet it shares a similar theme in showing how we treat dogs — ostensible big balls of kindness — reflects back on us as a society. After all, if we cannot be kind to man’s best friend, how are we ever going to be kind to one another?

Space Dogs prompted many walkouts in my screening, meaning it may be a hard sell for distributors. Deckert Distribution have the rights, and may try have some success in the arthouse circuit.

Available on Mubi is September.