"Greasy movie"
Greek auteur Yorgos Lanthimos shows his new short on Mubi, a strange provocation that needs to be watched again and again!

A cellist has a mind-bending encounter on the New York subway in Nimic, a brief riff on the theme of The Double from Greek maestro Yorgos Lanthimos. Baffling and inviting in equal measure, it will delight die-hard Lanthimostans while easily alienating fans of conventional three-act structures. In any case, it shows what Lanthimos is capable of with smaller resources and only 11 minutes of runtime.

The film begins with dramatic music scoring Father (Matt Dillon) waking up next to his wife (Susan Elle) and eating breakfast with his children. The music stops and starts, quickly revealing the Father rehearsing an orchestral piece. This deliberate use of artificial music helps to set the tone for Nimic, which is all about artificiality of performance itself. After rehearsal, he takes the New York Subway. He asks a woman (Daphné Patakia) the time. She pauses, looking like a typically antisocial user of New York transit systems. Then she copies him: “Do you have the time?”

This is a deliberately repetitive movie, working like a piece of music itself, repeating brief poetic motifs — a boiling egg, a subway ride, a cello being played — at a smooth and intriguing rhythm. She is his mimic. She follows him. He goes home to the mother of his children and says: “Children please, tell your mother who their real father is.” The mimic repeats the same, and the children respond: “How should we know? We’re just kids.” To the average person, this should seem obvious, but in Yorgos’ world, it’s a deliberate provocation; asking us to question standard norms in favour of strangeness and paranoia. 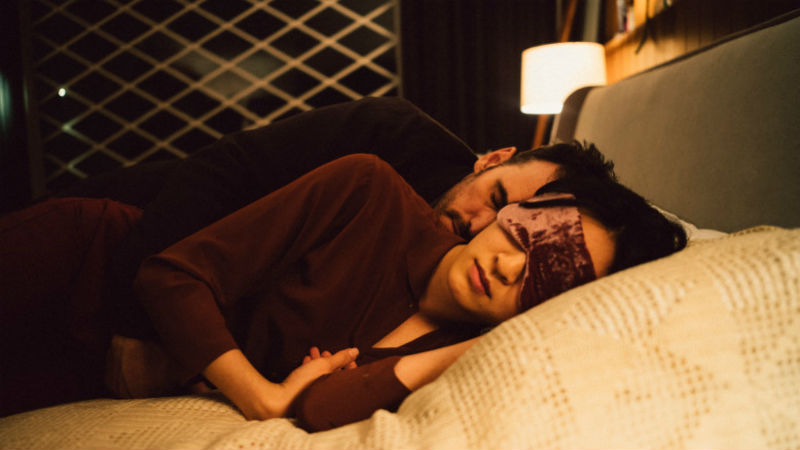 For Lanthimos completists — who are more likely to seek the movie out than the average viewer — Nimic presents all of his usual tricks. The usual perspective distorting fish-eye lens is here, along with whip pans and lateral tracking shots. Actors in Yorgos Lanthimos films do not emote very much. Like in Kubrick, their deadpan faces are part of the theme itself; a reflection of a dystopian world where nothing makes sense. Circling upon itself with twisted glee, this is a concept that could conceivably go on forever, a kind of Groundhog Day (Harold Ramis, 1993) for nihilists.

Perhaps the title can give us a clue, yet it seems to be another one of Lanthimos’ tricks. On first glance Nimic looks like a deliberate misspelling of mimic, yet a cursory look at Wiktionary tells me that it’s the Romanian word for both “nothing” and “anything”. This double meaning is a fitting descriptor of the film itself, which some will find laden with deeper themes and others will find rather empty. Perhaps I need to watch it again. And again. And again.

The film premiered as part of the Fuori concorso: Shorts programme in the Locarno Film Festival 2019, when this piece was originally written. It premieres in the UK in October, as part of the BFI London Film Festival. Out on Mubi on Friday, November 27th (2020).

An innovative, 12-minute one-reeler made with musician Thom Yorke of Radiohead is in cinemas from Wednesday, June 26th and on Netflix from Thursday, June 27th [Read More...]