An elevator to the stratosphere winches passengers up from Earth to the docked spaceship Aniara. The interplanetary passenger liner is effectively a gigantic shuttle taking people to Mars to begin a new life. As the journey can be mentally traumatic, Aniara has an on board facility called Mima, a room / interface into which users plug themselves to relive old memories. Both interface and its human client group are looked after by a facilitator called the Mimaroben (Emelie Jonsson). The clients lie down with their heads resting on something that looks like a neck brace and experience, say, a forest in Spring with a fresh brook running through it, “the Earth as it used to be”. 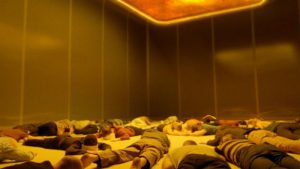 Early in the journey to Mars, Aniara hits space’s equivalent of an air pocket: the ship tilts and, for a short time, everything on board is total chaos. Then things return to normal. Only, they don’t.

Eventually, the captain announces over the ship’s large screen video, public address system that Aniara swerved to avoid a fatal collision with an asteroid. The passengers and crew are very lucky to be still alive. The manoeuvre also involved jettisoning all the ship’s fuel. Now Aniara is drifting having been knocked off course – not a problem since once it approaches a nearby planet or other celestial body, the crew can use the planet’s gravitational field to slingshot themselves back on course. However as the Mimaroben’s world-weary, astronomer room mate (Anneli Martini) points out to her, the ship isn’t going anywhere near any such planets or bodies. So they’re just drifting through space with little likelihood of either reaching Mars or being rescued.

What follows, unusually and refreshingly for an sci-fi film ostensibly about space travel, is a study of a self-enclosed society in crisis as it moves from a consumerist passenger liner model to something much more prescriptive and co-operative. Food production shifts to algae-based crops which may provide a less pleasant diet but nevertheless ensures all the ship’s the population are adequately and healthily fed.

As more and more people want to use Mima as a form of temporary respite from the ship’s seemingly hopeless predicament, the facility eventually reaches a point where it can no longer cope with the client numbers and breaks under the strain. Accused of shutting down the now inoperable system, the Mimaroben is moved to more menial tasks. 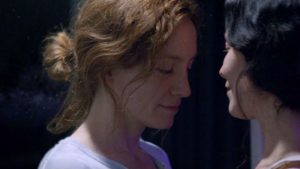 Despite her initiating the occasional unsatisfactory sexual encounter with a male pickup, the Mimaroben’s main romantic interest is to be found in a pilot named Isagel (Bianca Cruzeiro) with whom she eventually moves in and forms a household. This works for the two of them, at least for a while, but elsewhere on the ship the social tension becomes more and more strained. Fundamentalist quasi-religious cults arise, their dubious practices involving gathering for mass orgiastic rituals, partly for the purposes of procreation. Meanwhile, the marginalised Mimaroben may have a long term solution to all the unrest: she harbours a dream of building a VR display of sorts outside the ship to show images to the population in order to help them cope with their situation.

It’s never discussed exactly what has befallen planet Earth, but images of conflagration jostle with Mima’s ‘past’ imagery of healthy woodlands and fresh running water suggesting global warming has taken its toll. Crew notwithstanding, the implication is that everyone on the ship possesses sufficient financial resources to buy their way out. When disaster occurs, their bubble of self-preservation is burst and they enter into a sort of social free-fall where anything goes. Perhaps the piece overreaches itself a little with its religious orgies which play out as compelling spectacle even as you half wonder exactly what they’re doing in the narrative. Otherwise, though, it’s impressive as a piece of sci-fi, refreshingly intelligent as a portrait of a society in crisis. Overall, it’s wholly fascinating.

Aniara is out in the UK on Friday, August 30th. On VoD in March. Watch the film trailer below:

The family unit breaks down irreparably in this riveting and stylish CG short echoing Von Trier, the Quays, Hitchcock and Lynch – from the Annecy Festival [Read More...]

A detailed examination of the ideas and personalities behind Dan O'Bannon, H.R.Giger and Ridley Scott's classic 1979 SF shocker Alien is in cinemas and VoD [Read More...]