"Filthy genius movie"
The uncommonly powerful love scenes easily make this Hitchcock's most mature film. We go deep into the film noir, unlocking its striking romantic vision - back in cinemas on Friday, August 9th, more than 70 years after its original release

The extraordinary power of Notorious does not come through its plot (although the story concerning Nazis hiding in Brazil was renowned for its topicality and thematic resonance) or Ben Hecht’s Academy-Award nominated dialogue (although every line either reveals something about the plot or character) but rather its two central performances from Cary Grant and Ingrid Bergman; two lovers bound together by a mutual self-loathing.

The concept is simple. Ingrid Bergman plays Alicia Huberman, the daughter of a disgraced Nazi traitor to the US government. To mask the pain of her father’s betrayal she drinks copiously, hosting parties where she fails to pretend that nothing is the matter. Government agent Devlin (Cary Grant) meets her at one of her parties, and recruits her to travel to Brazil, where she will use her father’s name to infiltrate a group of Nazi spies plotting a deadly uranium attack.

Released in 1946, the central concept was highly timely. WW2 had only just ended, people were afraid of Nazis on the loose in South America, and concerns about atomic warfare had been heightened after the deadly bombs America detonated in Hiroshima and Nagasaki. By roping Cary Grant and Ingmar Bergman in on the tale, Hitchcock scored a true box office hit and created one of his most gloriously romantic films, perhaps only bettered by the James Stewart-starring Vertigo (1958). 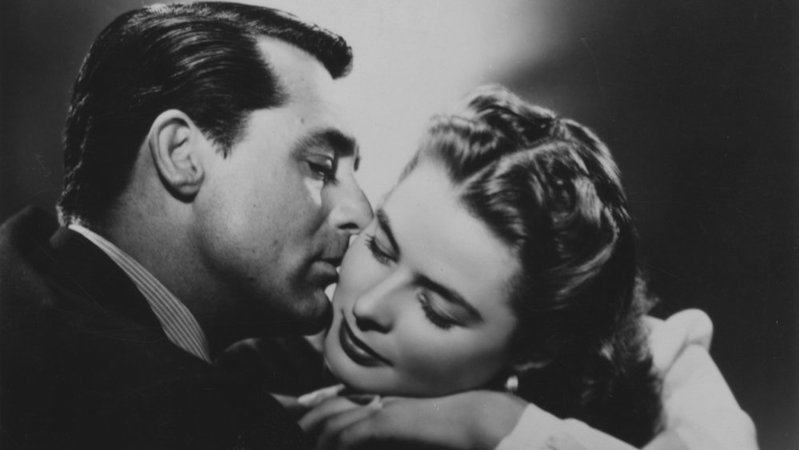 In true Hitchcock fashion, the film is a classic not because of its story but how it goes about telling it. With Ingrid Bergman and Cary Grant, Hitchcock found the perfect correlatives for his twin themes of love and fear, and how often they can be two sides of the same coin. Her Alicia Huberman is a totally broken woman, a compulsive alcoholic, drawn into the arms of Cary Grant’s infinite cool, while Grant’s Devlin is a failed attempt at a posturing blank slate; his eyes fearful of ever conveying anything other than pure detachment. Nonetheless, as part of his plan, she must be driven into the arms of Alexander Sebastian (Claude Rains), sending Devlin into a spiral of jealousy. Suddenly the previously composed government agent has to face up to his true feelings, lest he loses the first person he’s ever really cared for.

Hitchcock has always been known for the way he co-mingles sex, lust and love with the creeping fear of the unknown, yet Notorious is so seeped in its glorious, doomed romanticism that its images of love transcend the bounds of the conventional thriller into something incredibly gripping, vital and actually rather unconventional.

It’s best known for its Hay Code-skirting kiss scene, in which Grant and Bergman trade endless three second smooches for the better part of three minutes (a duration completely novel at the time), yet these moments keep on recurring, making it a true film of smushed-together faces, filmed in glorious close-up. Here Hitchcock innovates the use of the zoom. While the best example is the long pan from the stop of the stairs down to Alicia in the ballroom holding the key for the basement, Hitchcock also uses fast zooms during romantic sequences as well, suddenly getting us up close and personal with our subjects in the midst of passion. Every close-up becomes a tightening of the vice, another way of rushing to the heart of the matter, carrying us, the viewer, along with him.

It’s success rests upon Ingrid Bergman’s beautiful face, playing a woman endlessly oscillating between self-hatred, doubt and fear; both of the enemy and the far more terrifying prospect of opening her heart to another man like she did to her traitorous father. Is there any actress in history of cinema that could pierce quite so fiercely into the heart as her? Whether its as Rick Blaine’s ex-lover in Casablanca (Michael Curtiz, 1942), the wife in a failed marriage in Journey to Italy (Roberto Rossellini, 1954) or the terrifying matriarch in Autumn Sonata (Ingmar Bergman, 1978), no actress before or since has ever been so effective at conveying vast emotions through the power of close-ups alone. Watching her act I find my critical faculties melting away in favour of pure adoration of such an evocative range of facial expressions. It’s hard to imagine any other actress playing that same role. 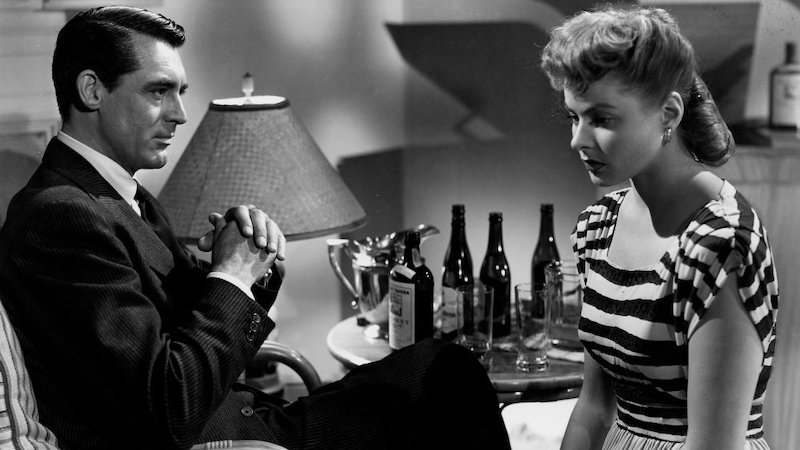 The plot of Notorious might be concerned with violence and death, yet these moments almost entirely take place off-screen. Whether it’s the agitated guest who is euphemistically “driven home” or the iconic final scene where Sebastian walks back to the mansion and an almost certain death, everything is suggested rather than depicted. The MacGuffin may concern hidden uranium, yet no bombs go off, voices are rarely raised, and there are no wild chase scenes. Rather the most violent scenes are the love sequences, both players losing themselves in the midst of incredibly raw and evocative passion.

Hitchcock understands better than any other mainstream director that love and sex can be far more terrifying than gunshots and creatures in the dark. It is rare to see a romantic thriller where both characters are ostensibly so weak-willed, yet one where their love for each other eventually sees them through to a happy ending (eighties and nineties noir updates almost always end up with betrayal or death). Instead Notorious stands out for its belief that love can just about keep persisting, even when you hate yourself, drink obsessively, and are surrounded by Nazis. While Psycho (1960), Vertigo (1958) and The Birds (1963) are often considered to be bigger reinventions and artistic leaps in terms of Hitchcock’s technique, Notorious deserves credit for its uncommonly powerful, optimistic yet mature romantic vision; completely undimmed by the passage of time.

Notorious is back in cinemas across the UK more than 70 years after its original release on Friday, August 9th.

When violence gets dirty…

Jack Hawkins picks ten films that are *about* violence, explaining the dirty connotations behind the brutality, bloodshed and destructiveness [Read More...]