The Shock of the Future (Le Choc du Futur)

"Dirty gem"
In the male-dominated music industry of Paris in the 1970s, Ana uses electronic gadgets in order to create a brand new, dirty sound - in cinemas from Friday, September 13th

Although F.Murray Abraham who won the Oscar, it was Tom Hulce’s arc which led Milos Forman’s astonishing Amadeus (1984) through the cascading chordal changes which haunted Mozart as he wrote his librettos. Staggeringly situated in solemn sincerity, Forman explored the prowess classical opera held and holds on its listeners. Marc Collin, on the other hand, explores the power of electronic music of the 1970s, an esoteric genre as captivating as Mozart’s, imposing an impressive piece, much of it triumphantly directed.

Jodorwsky’s Ana plays the captivated fan, eagerly awaking during the film’s opening to a cigarette and Giorgo Moroder. Sinewy, sensual, sanguine, sagacious, Ana pirouettes periodically from the bathed bed to the multi composed keyboard from where she writes in one of the film’s more outstanding set pieces. This niche genre of avant pop music calls Ana in all its undiluted qualities, while others perceive its improvised mechanics as an affront. Captivated by the raw rigidity, Ana wastes hours reconnecting her thoughts to that of the music, as deadlines and past-times pass her by. 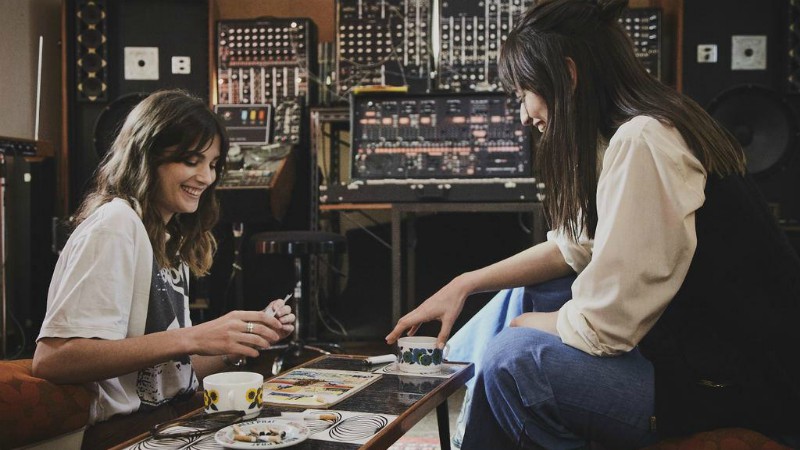 Despondent, her manager informs her that he’s called ten times to no reply, oblivious to the obvious charm this style of music holds. The apartment scenes are gorgeously decorated, spacious halls lit by exterior reflections cascading the outer world from the inner, rugs ravished under the barefooted composer. Working through the sound systems of a device she wishes to buy, Ana finds as much pleasure from the dropped needle as Trainspotting’s (Danny Boyle, 1996) Renton takes from the sharpened device.

It’s a finely accomplished piece of filmcraft, bathetic beats bearing becomingly between the various edits. One telling scene shows Ana writing with another female artist, writing their perspective truths in an industry both phallocentric and underplayed. Between them, the two women embody the steamiest sections seventies youth culture shows in all of its most glorious of detail.

And yet the film lacks the panache posited on personal conversation. At times it comes across a little robotic in delivery, just like the machines portrayed. On the other hand, the soundtrack is reliably stellar!

The Shock of the Future is in cinemas on Friday, September 13th.

A robot with profound human feelings: this new doc about Gary Numan reveals the emotionally fragile human being and the ups and downs behind one of Britain's most poignant and innovative pop idols of the 1970s [Read More...]