"Dirty gem"
Young girl in 19th century Snowdonia struggles to keep her family together, in Gothic period drama with flavours of horror - on VoD on Monday, December 11th

Poor Gwen (Eleanor Worthington-Cox) has the weight of the world on her shoulders. Sharing a bleak cottage with her mother Elen (Maxine Peake) and little sister Mari (Jodie Innes), the vulnerable trio, unprotected by a father absent at war (probably the Crimean War), are under threat to move out as the neighbouring slate mine has an eye on their property to expand its operations. Gwen’s mother is unsympathetic as she is so stressed, constantly shouting at her and, often unreasonably, ordering her about. Her only companion is little Mari and her only consolation the smile of a handsome boy, Harri Morris (Gwion Glyn), who fancies her at the local chapel, which they attend every Sunday.

The family is threatened by frightening incidents. A sheep’s heart is nailed to their front door and their sheep are killed in the night. The sinister Mr. Wynne (Mark Lewis Jones) takes Elen aside after chapel and tries to persuade her to give up her cottage and land. She refuses. It is her home for her and her daughters and will remain so to await the return of her absent husband (the whole family is shown briefly happily re-united in former times). The forces of greedy capitalism will not be assuaged. The film builds up to an horrific climax at which the two young girls must flee their home. 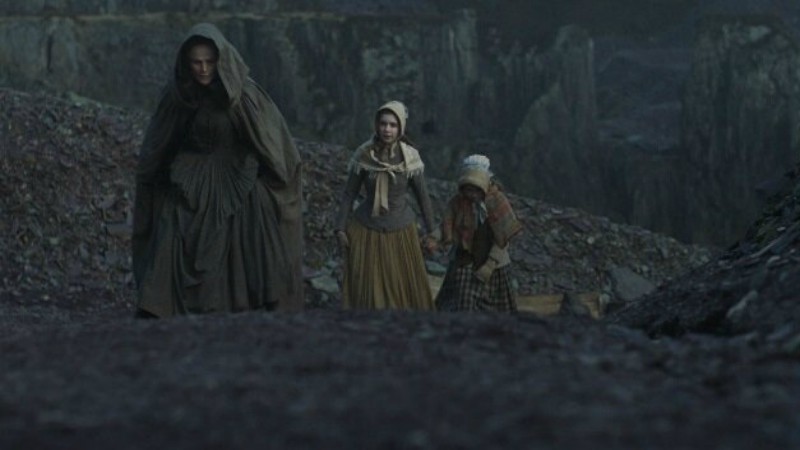 The film is set in the beautiful but harsh landscape of Snowdonia in Wales. Great storm clouds gather over the mountains and eventually break into loud thunderclaps and increase the sound of the moaning wind that constantly fills the air round the cottage. Mists shroud the atmosphere out of which occasionally emerge threatening figures. The film is self-consciously a horror movie as well as a piece of social documentation. The horror is not only the usual Gothic side-effects but the injustice which the family must endure. The mother cuts herself to let out “sin”, she turns around at Gwen in her bedroom, seemingly made hideous by some disease, a horse that has been injured must be put down and hacked to pieces for meat to feed the family. Gwen cannot bear to kill the horse, that has bolted off after being frightened by a clap of thunder, or chop him up, so it is done by the bad-tempered mother. Gwen presents a picture of innocence continually tormented by the cruelty and harshness of the world.

This story is continually bleak. Except for the smile of the boy in the chapel and occasional sympathy of the local doctor (Kobna Holdbrook-Smith), who, anyway, later falsely accuses Gwen of stealing some medicine, there is no relief from the depression and misery. Some may find this an overdrawn aspect of the Gothic effects of the film. 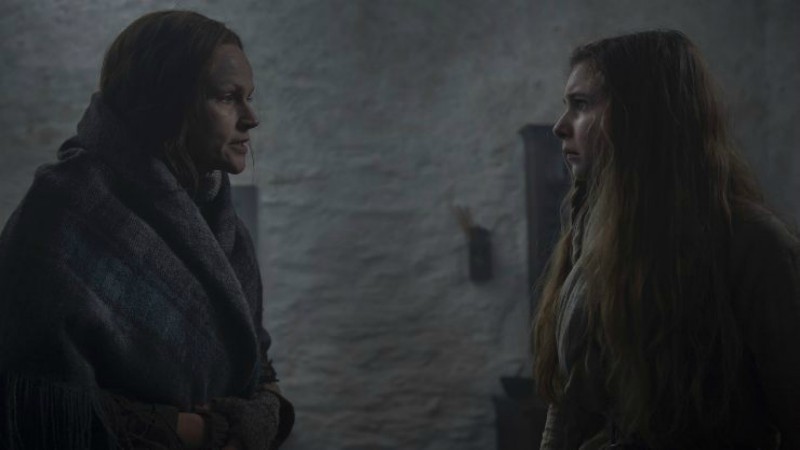 What Gwen does successfully convey, however, is the misery that befell so many of the peasantry in the United Kingdom in the mid-nineteenth century as the ways of capitalism and economic “improvement” strode across the country breaking up traditional ways of life, settled villages and family life. In the Highlands of Scotland, during the “Highland Clearances”, the Gaelic-speaking peasantry were thrown off their lands for the sake of more economic sheep farming. In Ireland (most of which was then part of the United Kingdom) the peasantry was evicted from their cottages, allowed to starve to death in ditches or flee to America in the wake of the Great Famine of the 1840’s. Not all of this was deliberate, but it was found to be highly convenient for the British government in clearing, what was then called, “rural congestion”. Likewise in Wales, the coal and slate mines broke up traditional communities to advance their ends.

Whether people were driven from their cottages quite in the way depicted at the end of Gwen may be debatable, but the horror motifs well convey the injustice of it all and the helplessness of those who tried to stand in the way of an all-powerful capitalism. Elen, if she had been less brave, would have sold her land to the powerful Mr. Wynne. She and her daughters, with a fairly small settlement, would have settled elsewhere in Wales, forgot their memories of their homestead, and become one of the numberless workers at the pitheads or slate mines of the Industrial Revolution. Such is the story of so many of the Welsh working class.

Gwen is in cinemas on Friday, July 19th. On VoD on Monday, November 11th.

Is this the Irish Daniel Blake? Young mum-of-four faces poverty and homelessness in a Dublin that has little time for those caught on the wrong end of the capitalist system - in cinemas Friday, March 8th [Read More...]