"Filthy genius movie"
Nicolas Roeg's horror masterpiece is back in cinemas nearly 50 years after its original release, and it remains a harrowing reminder of our impermanence, and the immutability of our future - out on Friday, July 5th

Cinema, perhaps better than any other medium, has the ability to completely collapse time through the power of editing. Think the epic transition between the prehistoric era and space travel in 2001: A Space Odyssey (Stanley Kubrick, 1968), the non-linear structures of Pulp Fiction (Quentin Tarantino, 1994), allowing viewers to experience cinema in terms of thematic connection and not simply A-to-B storytelling. Don’t Look Now is another classic example of how editing can transform material into something truly haunting and marvellous. Yet here, instead of freeing the story, Don’t Look Now’s editing chokes it, creating a sense of dread that is palpable from the very first frame to the last.

Nicolas Roeg had experimented with fragmented storytelling techniques before with editor Antony Gibbs with Performance (1970) and Walkabout (1971), yet this collaboration with Graeme Clifford represented a major step up in form; its use of fast-forwards, flashbacks and frequent, sometimes lightning-quick insert shots a true masterclass in form.

Everything is set from the very first frame, entombed in stone like Venice’s churches. While John (Donald Sutherland) and Laura Baxter’s (Julie Christie) daughter — clad in an iconic red mackintosh — is playing with a red ball outside a pond, John is working through some slides. As he spills water on the slide of a church, the scene turns completely red, linking his daughter’s drowning with his own eventual bloody demise. 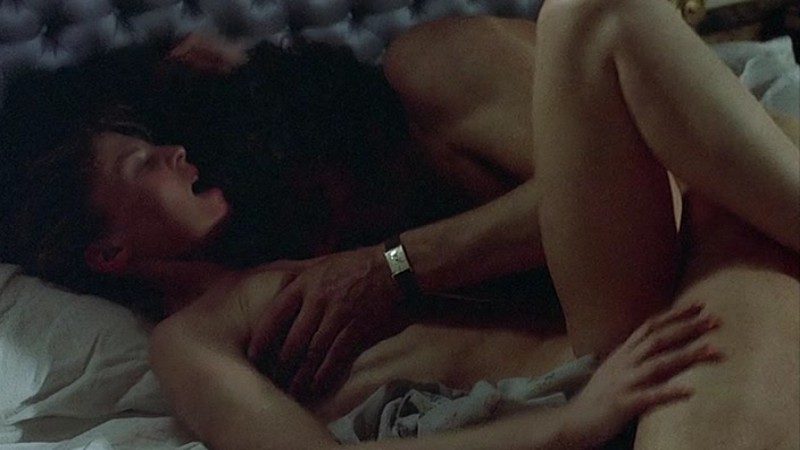 They move to Venice, where John works on restoring a church. The city is treated as one giant mausoleum, emptied out and shrouded in mist. It’s wintertime, everyone is wrapped up in hats, scarves and coats, and there are endless shadows emanating from its tiny, winding alleyways. As the psychic blind woman says, expressing her sister’s view: “it’s like a city in aspic, wrapped over from a dinner party, where all the guests are dead or gone.” It’s a place, like John and Laura, stuck in time, seemingly unable to move forwards or backwards.

Their relationship suffers, as demonstrated by its now iconic sex scene. It is still rare to see a film use sex as a thematic point rather than simply plot advancement, Laura and John desperately writhing together as a means to cling on to the little spark of life they have left. Intercut with scenes of them getting dressed afterwards, it stresses both their togetherness and estrangement, showing the difficulty of maintaining passion after suffering such a momentous loss. Grief has this power to rent people apart, giving them little to cling onto other than the memory of their daughter.

When Laura meets fellow British tourists Heather (Hilary Mason) and Wendy (Clelia Matania) and Heather explains how she can communicate with her daughter, she is naturally intrigued by these odd yet mystical duo. In a common horror theme from Rosemary’s Baby (Roman Polasnki, 1968) to Hereditary (Ari Aster, 2018), her husband doesn’t believe a word she says. But when he starts seeing a little hooded figure in a red mackintosh who looks just like his daughter, mysterious happenings start to question his grounded and skeptical beliefs. Perhaps he has the ability to see things too. 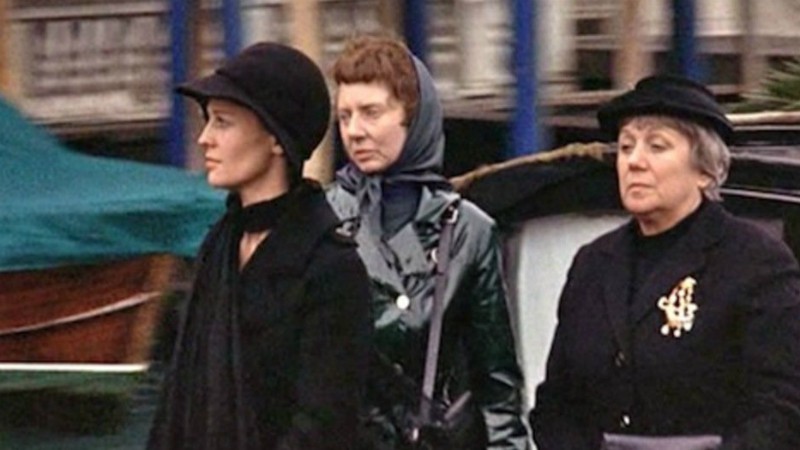 The technicolour cinematography allows the red of his daughter’s jacket to really pop out, contrasting violently with all the other muted colours. It is perhaps one of the most famous uses of the colour in cinematic history, alongside the little girl in a red coat in the otherwise black-and-white Schindler’s List (Steven Spielberg, 1993). To stress the murderous aspect of the colour, Roeg often uses dissolves, allowing red objects to bleed into one another with nightmarish regularity.

Things double and double, the use of repetition and doppelgängers constricting the narrative to its deadly eventuality. John’s hubris is in thinking he can make sense of what he sees in front of him. With bodies fished out of the river at regular intervals, and a sighting of his wife on a boat with the two women, John frantically searches for his wife despite the fact she has gone back to England to see her son, who has had a mysterious accident. What he has in fact seen is a premonition of his own funeral. The ending — which is either haunting or oddly bathetic depending on who you ask — then reveals that the red cloaked figure is not a phantom but a murderous dwarf, who quickly dispatches him with a knife. Then in a remarkably edited sequence, the whole film seems to pass before his eyes, revealing its narrative to be almost completely circuitous.

There is a religious component to the dazzling editing. If God exists, then He would not see the world in a linear fashion, but everything that has ever happened and everything that will ever happen simultaneously. Everything is predetermined, nothing happens by chance. This is the true horror: not jump scares or bloody mutilations, but the idea that nothing you can do can ever change your fate. Only the gifted such as Heather and John can see parts of the future, but this doesn’t mean they can do anything about it. A truly terrifying prospect indeed.

A 4k restoration of Don’t Look Now hits UK cinemas on Friday, July 5th (nearly half a century after its original release in 1973)

RIP NICOLAS ROEG, WHO HAS PASSED AWAY AT THE AGE OF 90 - The man who manipulated time and confronted the Brits with sex: watch the history of one of Britain's most subversive filmmakers, who authored 'Performance', 'The Man Who Fell to Earth' and 'Don't Look Now' - the documentary about the now octogenarian filmmaker is available on BBC Player [Read More...]

Hair-raising horror about family bereavement starring Toni Collette has some of the darkest imagery you will have seen since Ken Russell's THE DEVILS - now on Netflix [Read More...]