"Greasy movie"
Young American couple gives up urban life in favour of an "old-fashioned" farm, where they both struggle and wallow in the strange paradoxes of nature - in cinemas Friday, November 29th

The year is 2010. John and his wife Molly are your average Californian urbanites. They dwell in a very small flat in Santa Monica, a coastal district of Los Angeles. John is a established documentarist, while Molly is a chef. One day they adopt a black pooch called Todd, saving him from certain death at local dog pound. But Todd won’t stop barking while his parents are away. As a consequence of the nuisance noise, all three get evicted from the building. They have just 30 days to find a solution and move out.

Giving Todd away isn’t an option because they are firmly committed to keeping the animal for life. Moving into a different block would probably see a similar closure. So they decide to move into the countryside near Los Angeles and set up a farm. They don’t have any money, but friends and investors promptly chip in. The farm isn’t just about Todd’s well-being. Molly always wanted to plant her own vegetables, while John is a also a environment lover, having worked in many nature shows for television. So they set the Apricot Lane Farms, where they grow a plethora of vegetables (from lemons and avocados to tomatoes and greens) and raise a variety of animals (chickens, goats and a pregnant pig called Emma, who succeeds to give birth to no less than 14 piglets). In total they plant 10,00 orchard trees in more than 200 different crops. Their farm is in stark contrast to the neighbouring establishments, mostly gigantic monocultures.

Their initiative is indeed fascinating and it epitomises the escapist fantasies of many large-city dwellers. This tallies well with our vision of cinema as a tool for personal liberation. They hire a local consultant who helps them to overcome the successive challenges year after year. A few years later, however, tragedy strikes and they are left to fend for themselves without professional help. The challenges are numerous: pest (coyotes, snails and small rodents), draught, flood, ferocious winds and changing climate patterns. Little by little, they learn how to grapple with the constant changes and barriers on their own

The most touching moment of The Biggest Little Farm is the realisation of inevitability of death. John notes that his idealisation of Todd’s life did not prevent from shooting a coyote. He now understands that the ecosystem is “energised by the impermanence of life”, and that biodiversity is entirely contingent on species killing and eating one another. Their puerile awe at the recognition of the food chain in endearing to watch. It’s something we all learn in primary school, but most of us never have the privilege of observing from so close. 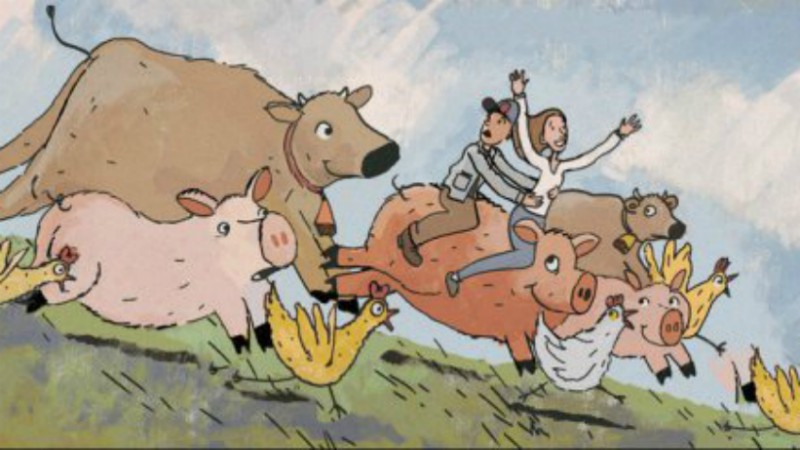 This American doc – which follows the couple for eight years – is extremely well crafted. It’s evident that the director/subject had extensive experience with the movie camera. There are plenty of cute animals and delectable family moments to awe. Perhaps too many even. The entire film is constructed as some sort of fair tale for children with pretty animations et al. It’s borderline didactic. It gets a little soporific for adults able to separate romanticism from reality. This is not helped by an irksome music score with an unrelenting country guitar.

I also found it very strange that a cash-strapped couple could create such a large, ambitious and undoubtedly expensive endeavour virtually overnight. Their business plan must have been made of gold. I wish there was more emphasis on how they managed to seduce investors and raise so much money so quickly. That is far more miraculous than the cycle of life itself.

My Biggest Little Farm premieres at the Edinburgh International Film Festival. It shows in London on July 4th at the Cine Lumiere. It’s in general release on Friday, November 29th.