"Dirty gem"
Dying in the middle of a busy road, a dog looks back on her life and the series of people who owned her in this unusually vibrant and colourful animated movie from Annecy

We here at DMovies don’t usually get excited by an animated film about a dog and its owner. It would have to be a very special movie indeed to make that happen. Well, Marona’s Fantastic Tale is just such a movie.

It’s bookended with a device straight out of film noir. The main character has been hit by a car and is lying in the road, dying, in the arms of an old friend who got to him a few seconds too late to prevent disaster. Him isn’t correct though: both characters are female. Marona is a dog while late teenager Solange is her owner.

The narrative flies in the face of the idea that people take on pets and everything is hunky dory thereafter. Marona never has a stable life. She’s the last of nine puppies in the litter, so her mother names her Nine as if knowing that her daughter may not be around long and that a new owner will likely give her a new name.

The last to be born is the first to be given away as Marona is placed with her father, a haughty Argentianian mastiff of high birth unable to resist the charms of Marona’s seductive mongrel mother. We see very little of him as Marona only lasts about a day there and ends up walking the streets.

She is taken in by the kindly Manole, a penniless acrobat who busks for peanuts and rehearses wire walking and trapeze artistry in his garrett atop a building. He names her Ana. All is going well until he lands a circus job with a no pets contract. 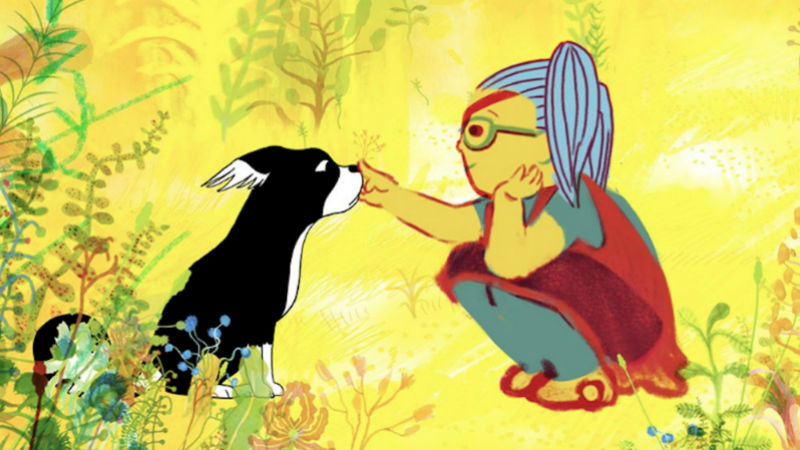 Next, she attaches herself to construction worker Istvan who names her Sara. Initially, he lets her live on the building site where he works, then moves her in with his ageing mother for company. This sours when the old lady, given to violent turns, hurts the dog. So Istvan moves Marona into his home. Unfortunately, his wife regards the dog as little more than a fashion accessory and soon tires of her. Despite Istvan’s best efforts, the dog is soon homeless again.

Small girl Solange finds the dog in a park, renames her Marona and tales her home without telling her single mum or her grandpa. Her mum is furious, but somehow Marona is allowed to keep the dog. As a child she loves it dearly, but when she becomes a teenager, she finds looking after Marona a nuisance as she’s rather be out spending time with friends. One day, she abandons the dog in a park tying her lad to a tree so she herself can catch a bus downtown. When Marona breaks free and follows her, you know it’s not going to end well, especially after the dying dog sequence at the start of the film.

Visually the film is a treat. Manole the Acrobat is rendered in orange and yellow, moving with a captivating fluidity light years away from what you’d get in a classic Disney film. Istvan the gentle construction worker is a stocky blue body outlined in purple while his self-obsessed wife resembles a yellow version of a spooky ghost from a Fleischer Brothers cartoon. The portrayal of Solange and her family is more homely. 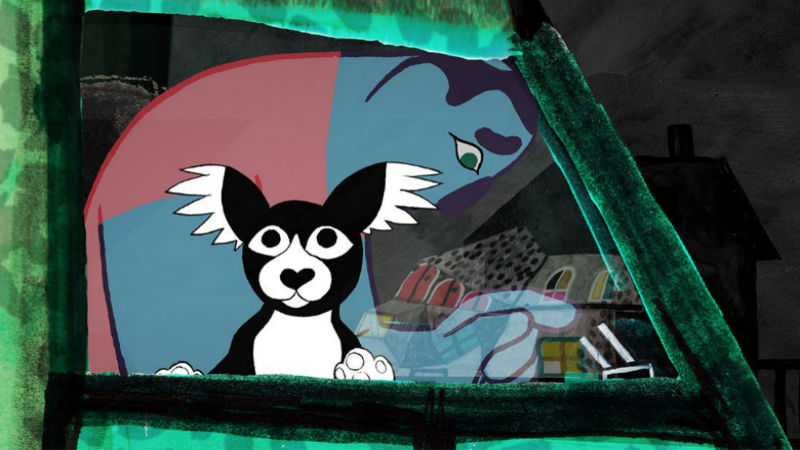 There’s a breathless street chase at the end as Marona follows the bus Solange has boarded, hard to watch because you’re expecting something to hit the dog at any moment.

Marona works not only as a film about the life of a dog but also as a series of snapshots of various sections of society – the insecure showman, the worker enslaved by the whims of his wife, the single parent family. On top of that. It’s a colourful, visual tour de force that will take your breath away. It fits the bill as a much better kids’ movie than most of the more commercial fare foisted on audiences by the major studios and it should equally delight dog lovers. Having said that, as a person who neither has young kids or dogs, I adored it. And I suspect you will too.

Marona’s Fantastic Tale showed in competition in Annecy. Watch the film trailer below:

Buñuel In The Labyrinth Of The Turtles

2D animated drama-doc details the reasons for and struggles of Luis Buñuel to make the documentary Land Without Bread - on VoD on Thursday, July 16th [Read More...]

An ageing painter and his wife struggle increasingly to cope with the former’s advancing dementia in this short CG / puppet animation from Annecy [Read More...]