Devon-born PJ Harvey sits with her musicians in the basement of Somerset House in London (incidentally, the real Somerset happens to be in Devon). They record her 2016 album The Hope Six Demolition Project. The artist is relaxed and affable. She plays her guitar, while also experimenting with exotic instruments and her elastically distorted voice. She engages in friendly banter with her all-male team, joking about the vocal similarity between “You can’t” and “You cunt”. Onlookers watch them from behind a glass wall. Photojournalist Seamus Murphy captures the action of both sides.

Parallel to this, PJ Harvey travels to various dangerous parts of the world: Afghanistan, Kosovo, Washington DC, Syria and the border between Greece and North Macedonia. She interacts with the people and the places. In Kosovo, she treads on the ruins of a former family abode, noting that she’s wearing her “expensive leather sandals” (perhaps an ironic riff on the notion of the “white saviour”?). She mingles with a Lesbian Washington rapper who owns a pooch called money, hence the film title. She converses with a Tajik musician. And so on. 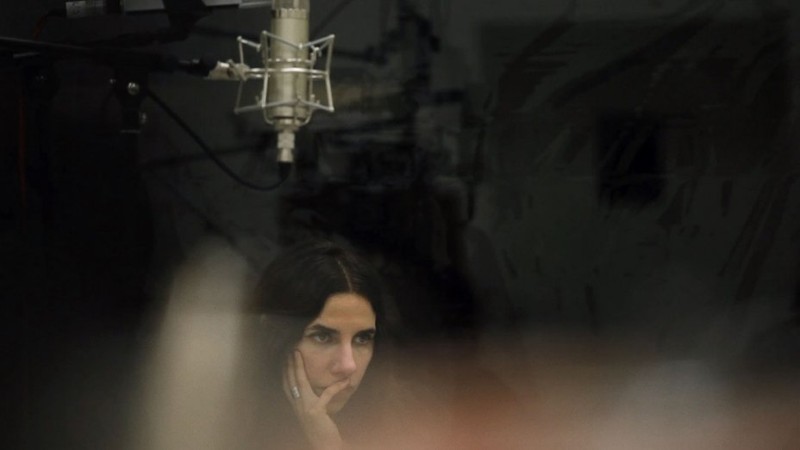 The filmmaker devotes a lot of attention to Washington DC, which fulfils a double function. Firstly, the American capital is home to Black “ghettos” such as Anacostia, which are as violent as some of the war zones portrayed in this doc. The overwhelmingly white neighbourhood of Georgetown does not even have a metro “so that Blacks can’t reach it”, we are told. Secondly, and paradoxically to the first function, Washington is home to the White House, the biggest warmongering organisation in the world. A white American blimp monitors an Afghan city, reminding people of the constant threat of Imperialism. Or at least that’s how I interpreted it. Otherwise, I’m not entirely sure what political message the director is trying to convey. I’m not even convinced he’s attempting to communicate a political message at all. Watch A Dog Called Money for the music and the images, just don’t attempt to squeeze a lot of sense out of it (like I’ve just done).

A Dog Called Money showed at the Sheffield Doc Fest, when this piece was originally written. It is out in cinemas on Friday, November 8th, and also on Mubi for a month.