"Greasy movie"
Fantastical, giant creatures Godzilla, King Ghidorah, Mothra and Rodan battle it out on land and sea, leaving cities devastated in their wake - in cinemas from Wednesday, May 29th

Warner Bros’ latest effort in their strategy to create a self-contained universe out of Toho’s Godzilla and his accompanying trademark monster characters to rival that of Disney’s popular Star Wars and Marvel cinematic universes is a mixed bag. On one level, it’s a hackneyed family story involving a couple splitting apart with their daughter caught in the middle, a plot not of the slightest interest to fans of Godzilla who aren’t paying to see a family drama. On another level, it’s a thinly veiled excuse to recreate Godzilla, King Ghidorah, Mothra, Rodan and others with state-of-the-art, special effects technology and have them fighting against one another, at which aim it succeeds handsomely. In passing it delivers facile, one-line ideas about nuclear war and global warming. Finally, it wants to explore the iconography of these extraordinary creatures but scarcely knows where to begin. They are great properties, but you can’t help but wish it was directed and produced by people with a stronger visionary sense.

The family story concerns scientist Dr. Emma Russell (Vera Farmiga) with her daughter Madison (Billie Bobby Brown) in tow. Her husband Mark Russell (Kyle Chandler), who when the film starts is out in the wilds studying wolf packs, is attempting to get back in touch with his daughter by email. Insofar as this family dynamic drives the characters, it feels pretty redundant. Farmiga upstages the rest of her onscreen family, investing her essentially cardboard character with pathos well beyond what the hackneyed script deserves. The presence of scientists played by oriental actors Ken Watanabe and Ziyi Zhang seems curiously peripheral, even though at one point the former plays a significant role in attempting to rejuvenate an apparently dead Godzilla. 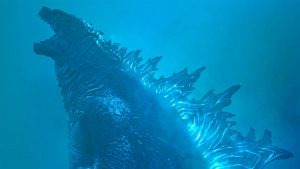 Much more interesting is Emma’s use of a device she’s built called the Orca to produce sound frequencies mimicking those of Titans in order to make them behave in certain ways. Her falling in with crazed military type Jonah Allen (Charles Dance) suggests her as a megalomaniac determined to unleash the giant beasts and cause havoc on Earth, but then she presents an alternative scenario in which mankind has ruined the planet through global warming and the monsters are its way of getting out of control humankind back in its rightful ecological place thus saving the planet from extinction. Promising concepts, but sadly they’re never really developed into anything. The same is true of ideas about Godzilla absorbing radiation so that he can produce self-immolating blasts which nuke his one-on-one adversaries in battle while he survives.

Put aside the many shortcomings, however, and the recreations of giant radiation-breathing lizard from the sea Godzilla, flying creature Rodan, Mothra the giant moth and, most especially, three-headed King Ghidorah, greatly impress. The latter is the real star here with his three heads swirling around menacingly on their long necks. Ghidorah possesses hydra-like qualities, but only once do we see a missing head regenerate, one of numerous elements on which the film makers fail to capitalise. A line of script somewhere posits him as a being from outer space who’s come to Earth and upset the balance of the monster ecosystem by displacing the ruling Godzilla, another idea which is nice as far as it goes but doesn’t go very far. Kong is name-checked a few times and appears occasionally in static images to remind us that Godzilla vs. Kong is due out next year. 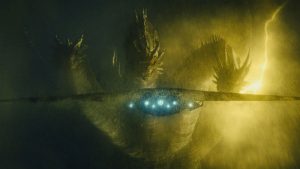 A mysterious organisation called Monarch the corporate logo of which coincidentally resembles that of Extinction Rebellion turned on its side has a series of numbered Outposts around the globe where various giant beasts are held in underground storage facilities. As titles such as ‘Monarch Outpost 61, Yunnan Forest, China’ appear on the screen, they create a believable sense of a covert, global network.

Yet in terms of developing an overall mythology, the whole is nowhere near as satisfying as the vision behind Warner Bros’ underrated kaiju (giant monster) movie Pacific Rim (Guillermo del Toro, 2013). Toho’s original Japanese Godzilla/Gojira (Ishiro Honda, 1954) and the more recent Shin Godzilla (Hideaki Anno, 2014) both proved the property capable of incisive socio-political comment even as its men-in-rubber-suit monsters of the fifties or their later computer-generated effects counterparts satisfyingly burned and stomped Tokyo. The new Godzilla: King Of The Monsters doesn’t really have anything like as much to say, preferring to trade in spectacle and fall back on monsters fighting each other, sending in troops with guns whenever the proceedings need another boost to keep the adrenaline up. In other directorial hands it could have been very special indeed: on so many levels, a seriously wasted opportunity. That said, the creatures themselves are fabulous – and they get an awful lot of screen time.

Godzilla: King Of The Monsters is out in the UK on Wednesday, May 29th. Watch the film trailer below: