"Greasy movie"
Stephen Bannon travels to Europe and makes new friends in the far-right, while also campaigning for Republicans in the US, in this fly-on-the-wall type of doc - in cinemas on Friday, July 12th.

In public, he’s charming and friendly, almost avuncular. He understands irony and self-deprecation. Talk show hosts love him. He claims to speak for the average American and to be fighting against the establishment. In private, however, he uses the f-word abundantly. “I’m going to f**k her”, he says in relation to Alexandria Ocasio-Cortez. Perhaps this man isn’t as magnanimous and kind as he may first seem at first.

Stephen Bannon is largely credited with the election of Donald Trump, which he describes as “a divine intervention”. Bannon remained his chief strategist until August 2017, when the two men fell out. It’s not entirely clear how close the two are right now. Nevertheless, Bannon remains very loyal to Trump’s cause and ideology. He works closely to the Republican Party. He was devastated when the GOP lost control of the House of Representatives, after the 2018 midterm elections.

The controversial political figure has made very good friends in Europe, with whom she shares many affinities. We see him meet up with Nigel Farage. They a passionate conversation about nationalism. Bannon believes that Trump’s election was a direct consequence of the Brexit referendum. “Victory begets victory”, he sums it up. We also watch him meet up with smaller and less significant leaders from the European far-right, including countries such as Belgium and Sweden. 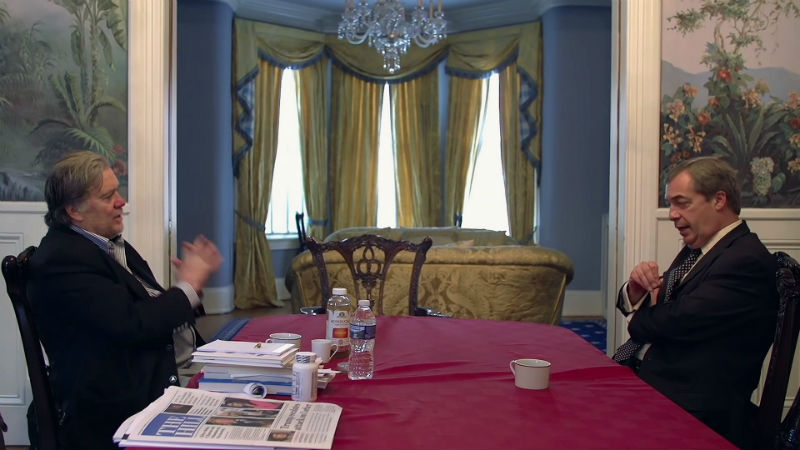 His Make American Great Again rhetoric – which he describes as “economic nationalism” – resonates very well very European far-right leaders such as Viktor Orban, Matteo Salvini and Marine Le Pen. Bannon and Le Pen deliver speeches that are virtually identical. They claim that people of any gender, race and sexuality can be American/French, as long as they put their country ahead of everything else. Conveniently, religion is left out of this bizarre “diversity” statement. That’s because Islamophobia is the central pillar of the far-right. It’s as if they were saying: “You can make up for being Black, female and gay as long as you too hate Muslims and immigrants”. The Brink reveals that Bannon is articulating a major far-right alliance in order to take control of the EU Parliament. The film title suggests that he’s on the cusp of a major international breakthrough. Thankfully, this did not materialise (something which the film does not address, as it was finished long before Sunday results were announced).

Despite denying any neo-Nazi tendencies, Bannon does not conceal his admiration for the Führer and some of his associates. The describes the “engineering excellence” of Birkenau with sheer awe. The book Hitler Sites sits on his desk. And he asks himself out loud “What would Leni Riefenstahl do?” when thinking strategically. He claims that propaganda is good thing. 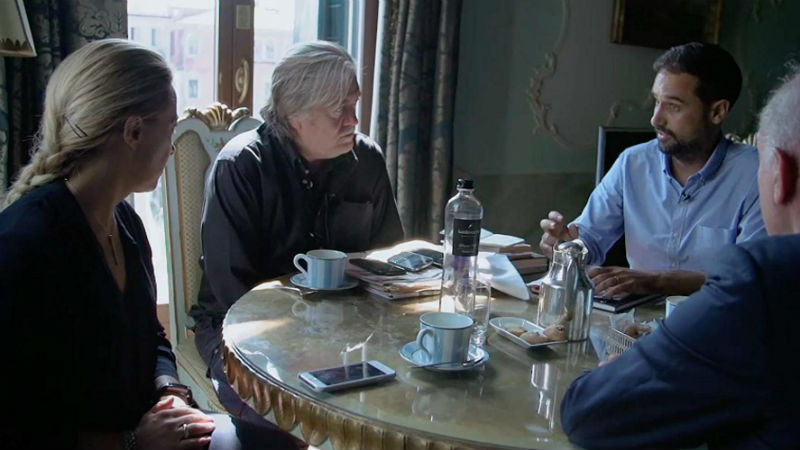 He also denies his that his European friends are neo-fascists, despite being confronted with evidence from the horse’s mouth (an Italian associate who has repeatedly confirmed that he’s indeed a neo-fascist). The film director Alison Klayman never challenges Bannon, opting to keep a distance instead. Guardian journalist Paul Lewis who asks the most incendiary questions, exposing the dangerous nature of Stephen Bannon’s work. Klayman captures Lewis as he interviews Bannon, fly-on-the-wall style.

While insightful, The Brink is also a timid documentary. I would hazard a guess that Bannon influenced the final cut, or at least had a say on which images could be used. The conversations with the far-right are very superficial, with nothing controversial being said. Despite the expletive-laden outbursts and the Nazi inclinations, he still comes across as a likeable person. Ths documentary fails to expose his most inflammatory comments about Muslims, his claim that people should wear racism “as a badge of honour”, and his connections to white supremacists and the KKK.

The Brink showed at the Sheffield Doc Fest, when this piece was originally written. It’s in cinemas on Friday, July 12th.

CHARLES CHAPLIN WAS RIGHT: DONALD TRUMP IS A LIAR. FROM OUR ARCHIVES - "Brutes have risen to power. But they lie!" Find out why the final speech of Charlie Chaplin's The Great Dictator is more urgent than ever, and that Trump's empty promises are a mere cover for very dirty things to come [Read More...]