"Greasy movie"
Keanu Reeves's titular character refuses to die, in awe-inspiring folktale about the odds of overcoming the impossible - third instalment of franchise is in cinemas Friday, May 24th

What will it take to kill John Wick? In the first instalment of the franchise, the eponymous assassin survived stabbings and shootings aplenty to avenge his puppy’s murder, and in the second he displayed an immunity to both vehicular homicide and home-flattening explosions. In John Wick: Chapter 3 – Parabellum, John withstands all of that and then some, including one moment that may well have some viewers, like a bewildered Austin Powers, asking of Mr Wick “Why won’t you die?”

The answer to John Wick’s indestructability lies in two words, fearfully whispered by those aware of his impossible exploits: Baba Yaga. John Wick isn’t a mortal man. He is a myth, a spectre, a supernatural being – the Boogeyman. Of course he can’t die. The John Wick films aren’t depictions of reality, nor are they overly concerned with stakes or tension. They’re folktales, legends, awe-inspiring accounts of impossible odds overcome. And just as legends are told and retold and retold again, each retelling more embellished than the last, Parabellum is a more elaborate and excessive retelling of its predecessors. 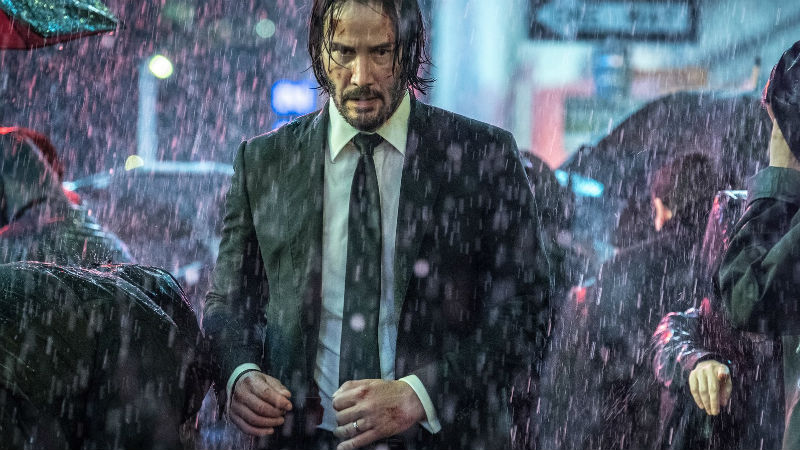 It picks up where Chapter 2 left off, John (Keanu Reeves) having been declared excommunicated by the clandestine High Table for killing a crime lord in cold blood on inviolable grounds. John’s new status means every assassin under the sun (which appears to be everyone and their dog) is gunning for him, forcing John to seek the help of former friends and mentors as he evades his would-be killers. Essentially, Parabellum takes the extended montage from Chapter 2, in which John fights off numerous assassins one after another, including a sharp-suited sumo and a deadly violinist, and extends it into a full narrative.

There’s nothing quite as fun in Parabellum as John Wick and Common’s steely Cassian sneakily shooting at each other in a crowded subway station, but Kevlar-vested Belgian Malinois and runaway horseplay come a close second, even if the latter ends before reaching full gallop. An early knife-fight stands out as the most enjoyably visceral (and violent) sequence, while the Skyfall-inspired third act climax appropriately retreads Chapter 2’s hall of mirrors sequence with added embellishments, including a cameo by Yayan Ruhian and self-aware asides. 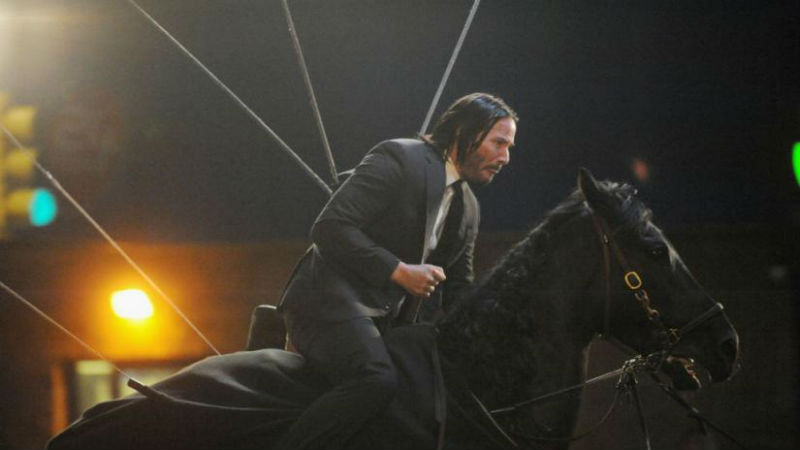 As with Jonathan Sela’s work on Chapter 1 and his own work on Chapter 2, cinematographer Dan Laustsen shoots much of the action from in front of Keanu Reeves, particularly in Parabellum’s extended shootouts. It’s the same technique Gilbert Hubbs applied when shooting Enter the Dragon (Robert Clouse, 1973)’s cave sequence, disposable baddies jumping into frame before being dispatched immediately by a bare-chested Bruce Lee. The decision serves to keep focus on Wick and, as the audience observes his already inconceivable kill-count increase, enhances his mythical status.

For all his indestructability, there is perhaps one thing that could kill John Wick: with a fourth film already in development, the myth of John Wick could well turn into an eye-rolling tall tale if overtold. Some folktales never lose their mystique, even after countless retellings, but many do; the more a child hears stories of the Boogeyman, the more they learn about him, the more the Boogeyman’s power fades. That’s what it will take to kill John Wick – an audience who has heard the same story too many times.

John Wick 3 is out in cinemas across the UK on Friday, May 24th.

Strangers on their way to a wedding bond through their mutual hate of pretty much everything and everyone they know, in romcom featuring Keanu Reevs and Winona Ryder - in cinemas Friday, May 10th [Read More...]