"Dirty gem"
Biopic of Cosa Nostra's supergrass acts as the moral compass of a nation grappling with a sanguinary past - on Sky Cinema and NOW on Wednesday, April 14th

This is the real – if highly romanticised – story of the very first man to grass on the almighty Sicilian mafia, the infamous Cosa Nostra. The story starts in 1980. Fifty-one-year-old Tommaso Buscetta (Pierfrancesco Favino) is a member of the organisation to which swore allegiance as a teenager. However, violence has now spiralled out of control and Don Masino (his nickname in the criminal world) now fears for his life. He departs, leaving behind a wife and several children. He flees to Rio de Janeiro under a different name, where he starts a new life with a Brazilian woman, fathering yet more children. Very much a la Ronnie Biggs.

He’s eventually arrested. The Brazilian authorities carry out the most persuasive torture session I have ever witnessed (involving his Brazilian wife and a helicopter). Don Masimo is extradited to Italy. Back in home nation, Judge Falcone (Fasuto Russo Alesi) questions him. At first, Don Masino refuses to cooperate, but the two men gradually develop a trust relationship. Falcone convinces Masino that the “honour” preached by Cosa Nostra is anything but honourable. Murder is widespread, and the mafia no longer smuggle cigarettes but the highly addictive heroin instead. At one point, Buscetta begins to opens up, revealing the inner workings of the criminal organisation and the names of its member. These conversations serve as the moral compass of both the film and Italy as a whole. Top-ranking criminals are sentenced to life in prison, while Buscetta is handed a sentence of just three years in exchange for his plea bargain. 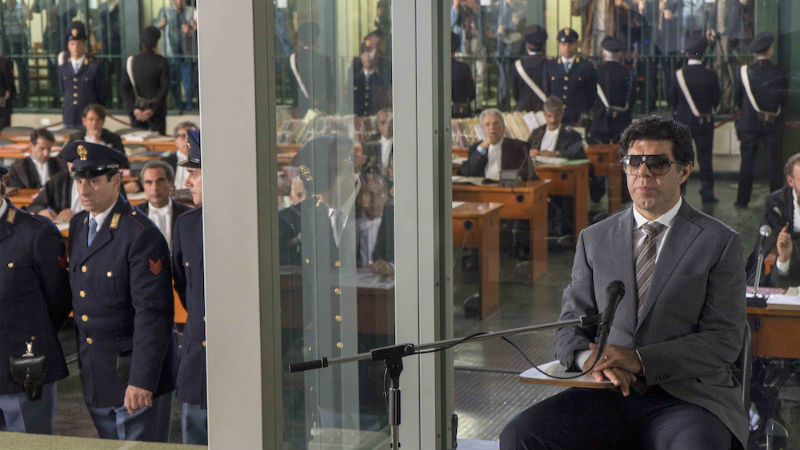 Upon completing his sentence, Buscetta moves to the US with his Brazilian wife and children under police protection, but eventually returns to Italy in order to take care of some unfinished business. Two of Masino’s Italian children are murdered, and so is Judge Falcone. Buscetta seeks revenge for these deaths, but not with a gun. He opts to use the legal route instead. He wished to confront his previous associates at court.

The courtroom scenes are magnificently chaotic, in good Italian style. Defendants scream from behind bars, one of them undresses, another one sews his lips in protest. The layout looks like a Roman arena. Everyone interrupts everyone. A defendant on the dock threatens both Masino and the judge. The judge frantically gesticulates with his hands. Such display of emotions would be unthinkable in a British courtroom. This is the trial from hell.

In the film’s most important sequence, Masino confronts his nemesis Toto Riina (Cali Nicola). Masino describes his numerous and gruesome crimes. Toto refuses to answer because Masino “lacks morals”, having been married three times and with eight children. Masino and Riina represent two very different pillars of toxic masculinity. Masino is the unabashed womaniser who doesn’t kill. Riina is the serial murderer who’s faithful to his wife. Our allegiance remains with Masino, who’s portrayed as a very likeable man.

The photography of The Traitor is extremely gloomy, emphasising the murky nature of organised crime. A large number of sequences are filmed at dusk, and there is very little artificial lights. Often only the profiles and the shadows of the characters are discernible. The violent is never too graphic, and the blood red colour is nowhere to be seen. 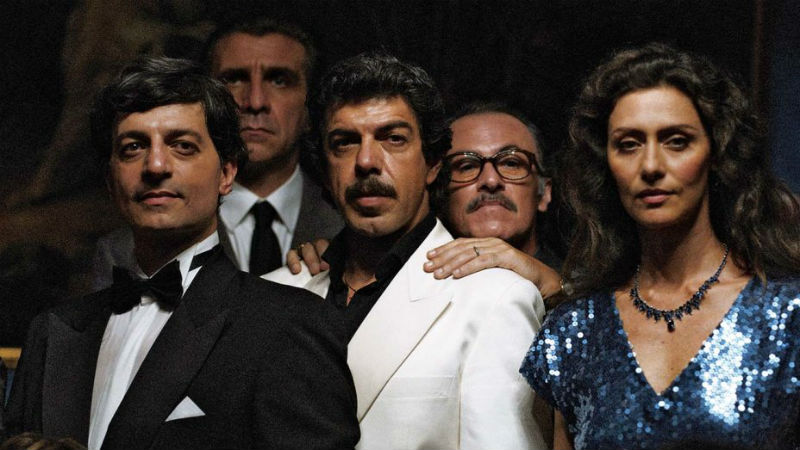 Yet The Traitor is way too long and convoluted at 146 minutes. Those familiar with the history of Tommaso Buscetta/ Don Mascino might fight the story very engaging enough, but I found the avalanche of characters and subplots a little tedious and exasperating. Bellocchio tried to pack too much material in. Perhaps the film would have been far more effective had the director focused on a specific chapter of the supergrass’s life, such as his interactions with Judge Falcone.

Another problem is that women are entirely secondary in this blatantly male world. They serve to satisfy the sexual urges of Buscetta and other men. And to reproduce. The director does not seem too interested in other functions. The female characters are left in the background, like an object, like an integral part of the mise-en-scene. I wish that Bellocchio had investigated their emotional and moral complexity in more detail.

The Traitor showed in competition at the 72nd Cannes International Film Festival, when this piece was originally written. On Sky Cinema and NOW on Wednesday, April 14th (2021). Previously available on other platforms.

Teen fantasy drama based on a real-life event is moving enough, but it also overdoes the ethereal tropes, and the outcome is sometimes a little contrived - in cinemas Friday, August 3rd, and on VoD the following Monday, August 6th [Read More...]