Take political satire and blend it with a twist of deadpan, a dash of comedy of errors, a little bit of Rowan Atkinson’s Mr Bean and Buster Keaton. Now stir in some drops of French pomp and American culture. And set it on fire with a statement about Palestinian independence. Like a an exotic absinthe drink. Sounds strange? Well, that’s because it is. It Must Be Heaven is an intoxicating cinematic cocktail. Exquisite and dirtylicious.

This is also a highly personal endeavour. The helmer Elia Suleiman plays himself. He’s almost completely silent (bar a few sentences in the final third of the movie), with a hat permanently glued to his head. He’s mostly smiley and avuncular. His exaggerated facial expressions change abruptly, a lot like Rowan Atkinson’s iconic character. Minus the canned laughter and the slapstick. Unlike the heavy-handed British personage, Elia is a very skilled man who knows exactly what he’s doing.

It all starts in Palestine. Elia’s uneventful life consists mostly with awkward interactions with his neighbours, including a trespasser who constantly sneaks into his garden in order to steal oranges from Elia’s tree. One day, Elia embarks on an aeroplane to Paris. The Louvre and Notre-Dame (before the fire, with its spire and roof still intact) have been deserted. Silence reigns. The French capital is virtually a ghost town. Perhaps this is a statement about feelings of solitude and anonymity in the City of Light. Elia visits a film producer, but his film script is promptly dismissed. “This is no good because it’s not Palestinian enough, it could be anywhere in the world”, he tells Elia. 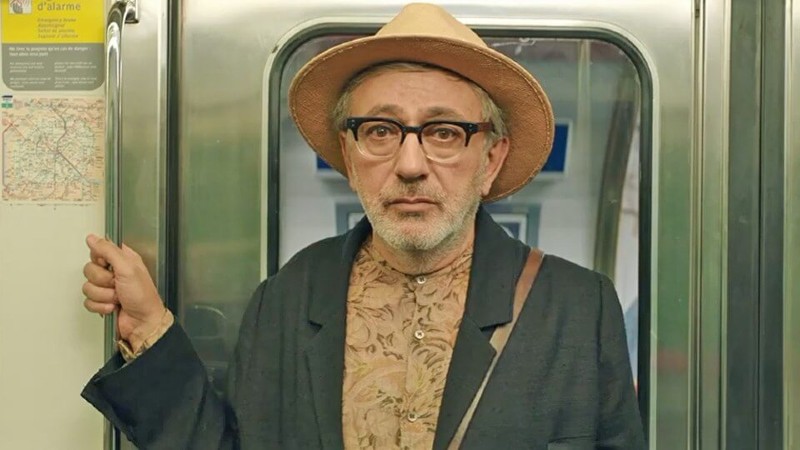 Elia flies to New York in the final third of the movie. The city is far more vibrant. The director-writer-star drives across Manhattan Bridge on a cab. He talks to the driver. This is where he opens his mouth for the very first time. The cabbie is elated upon finding out that Elia is a Palestinian, and that he comes from Nazareth, “just like Jesus Christ”. Elia bumps into a grudging Gael Garcia Bernal (playing himself), who complains about being asked to make a film about the Spanish conquistador Hernan Cortes in English. Bernal notes that Elia “makes funny films”, and that he’s “the perfect stranger”. This is very clever self-deprecation. This wonderfully wacky comedy is very strange. And a foreigner is a stranger. Elia is a zany outsider. A strange stranger.

The narrative devices of It Must Be Heaven are very unconventional. There is no explanation as to why the events take place. Bizarre characters suddenly pop into the screen, such as thugs running up the street, uniformed cops moving in synchronised fashion. A little birdie walks onto Elia’s keyboard as he attempts to work. He tries it again and again as Elia repeatedly shoves it away. A little trinket of a sequence. Urgent in its simplicity.

The soundtrack is sparse and intense. Nina Simone’s I Put a Spell on You is heard in Paris, as a group of impressively dressed females walks past in slow motion. Leonard Cohen’s Darkness is played in New York as a succession of unconnected events takes place. There are also a couple of songs in Arabic, including one in the final credits (which gave me the goosebumps; I’m desperately seeking the name of the artist and the tune).

The film is dedicated to Palestine, in memory of the director’s parents and of late British art critic John Berger. Elia also clarifies: “All nations drink in order to forget, except us Palestinians who drink in order to remember”. You will understand what he means in the very end of the movie, in a dazzling beautiful and energetic sequence.

It Must Be Heaven is showed in competition at the 72nd Cannes International Film Festival (in 2019), when this piece was originally written. This French Palestinian production would make the perfect companion to Nadav Lapid’s French Israeli Synonyms, which won the Berlinale earlier in the same year. Both films use an absurdist tone in order to comment on the Israeli occupation of Palestine and mock notions of national identity. It would be very interesting if It Must Be Heaven won the Palme d’Or. It would outrage the Israeli government and send a very strong, unequivocal political message across the globe.

It is out in cinemas on Friday, June 18th.