"Greasy movie"
Eighth feature by prodigy French Canadian filmmaker tells the story of two childhood friends who are asked to share a kiss for a student film, raising questions about their sexual preference - now available on Mubi

The young Matthias (Gabriel D’Almeida Freitas) and Maxime (Xavier Dolan) are childhood friends living in a small Quebecois town. One day they are asked to share a kiss for a friend’s college project. It’s an “impressionist-expressionistic” short movie with a duration of just one minute. Yet this kiss – which us in the audience never see – has a major impact on their lives.

Both Matthias and Maxime are “perfectly” heterosexual on the surface. Matthias has a beautiful girlfriend. He frequents a strip joint. Both meet girls in the local bar and mingle in a testosterone-fuelled environment. Their friends are the boisterous straight men in their early twenties. They drink beer, listen to loud music and the car, play French scrabble and enjoy prancing around. The director is in reality 30 years of age, but his baby face enables him to play a much younger character.

Matthias has a corporate job. He befriends a foreign worker called McAfee (Harris Dickinson). McAfee is the impersonation of macho cliches, such as overconfidence, a vaguely disrespectful attitude towards women and a unease at females who are vaguely vocal and independent. It’s amusing to see the British actor in a role so different to the two characters that catapulted him to fame: the gay protagonist of both Beach Rats (Eliza Hittman, 2017) and Postcards from London (Steve McLean, 2018). 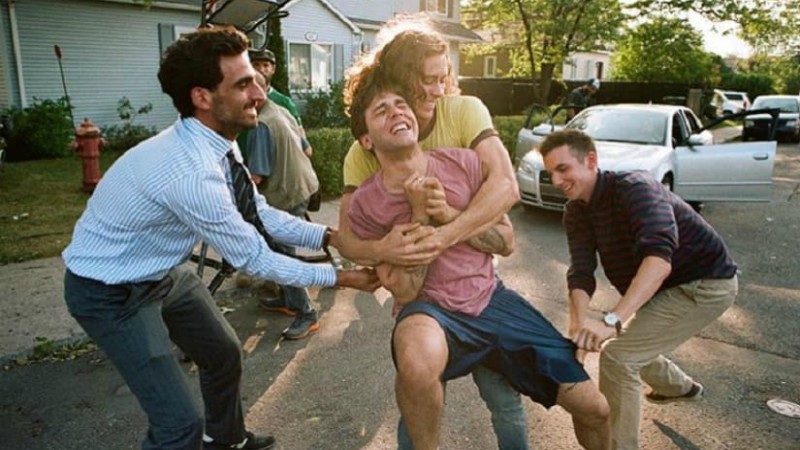 Gradually, questions are raised about Matthias’s and Maxime’s sexuality. There is no raging homophobia, but instead a certain inquisitiveness that Matt finds particularly disturbing. He thinks that his girlfriend suspects something. Are people subtly reprehending him for the little video, or is Matt himself suppressing his very own sexuality? His behaviour suggests that his does not know the answer.

Maxime has a dysfunctional relationship with his chain-smoking, manipulative and abusive mother, whom he supports financially. He has a huge birth mark on his face, which he’s very uncomfortable with (a mirror sequence reveals that he dreams of a spotless face). And he’s about to move to Australia in just a few days. The question as to whether the two childhood friends share a romantic connection will have to be addressed before Maxime leaves. The answer comes in the final third of the movie, and it’s worthwhile waiting for it.

The movie’s soundtrack is likely to please gay and straight men and women of all ages. Pop hits like the Pet Shop Boys’ You Were Always on My Mind and Britney Spears’s Work Bitch are played in crucial moments. Cinematographer Andre Turpin also delivers a decent job. A dance sequence blending time lapse with slow motion is particularly beautiful. An embrace filmed through the hole of a curtain while the rain falls outside is both engrossing and intriguing. 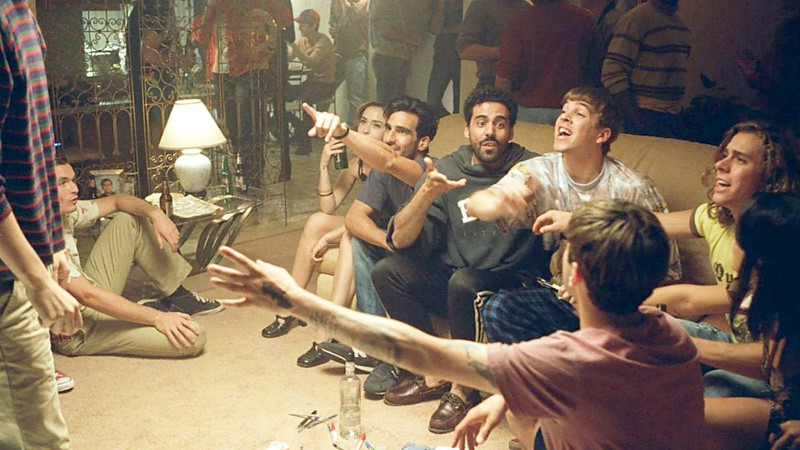 Xavier Dolan is already on his eighth feature as a director as 14th as an actor (that’s excluding short films and television work. Quite impressive for someone with just 30 years of age. Dolan is openly gay, and I would hazard a guess that the film contains many autobiographical elements. The director, however, refuses the LGBT label, stating during the press conference that “this film is not gay, it’s life”.

Dolan’s latest film, however, isn’t his best. It’s a little too long at two hours, and little happens in the first half. Plus many of the subplots (such as Maxime’s dysfunctional relationship with his mother, and a fight that Matt picks up during a party) neither come full circle nor seem entirely relevant to the story. Matthias and Maxime has colour and flare, and a few good moments, but overall it isn’t a profoundly moving film that will stay with you for a long time.

Matthias and Maxime showed in competition at the 72nd Cannes International Film, when this piece was originally written. It premiered in the UK in October, as part of the BFI London Film Festival. On Mubi is August/September.

Who the hell stole my play? Maysa Monção writes a letter to the late French playwright Jean-Luc Lagarce letting him know that Xavier Dolan did a great job adapting his masterpiece to the silver screen; you wouldn't want the poor man rolling in his coffin! Available now on Mubi [Read More...]