"Dirty gem"
Aspiring actress has to grapple with lewd and manipulative filmmaker, in cleverly multilayered psychological drama from China - on Mubi on Tuesday, July 13th

Nina is young and pretty. she has left rural Taiwan and moved to glitzy Taipei in search of a promising opportunity as a film star. She’s advised, however, that the role includes full frontal nudity in bed with two men. She’s told: “if that makes you uncomfortable don’t even audition for the it”. She auditions and wins. But that’s just the start of her problems. The menacing filmmaker manipulates her constantly. He emotionally harasses her in order to elicit the strongest emotions. At times, it’s unclear whether Nina’s acting or genuinely frightened.

What starts out as a didactic #MeToo statement about abuse in the film industry gradually develops into something far more complex and sinister. Some of the sequences within the film being made border absurdity. Nina is on a dinghy full of boxes. The police arrives and orders the shooting to stop. The boxes explode and a bloodied Nina jumps into the water. She nearly dies. The credits roll. Maybe this is a film within a film within a film. There’s a also dream within a dream within a dream. The layers of reality, allegory and imagination blend seamlessly.

Ke-xi is spectacular. She has the power to convey the most varies emotions with her facial expressions. She will make you laugh and cry. And she can navigate comfortably through the film’s various narratives layers, confounding viewers about her real emotions. 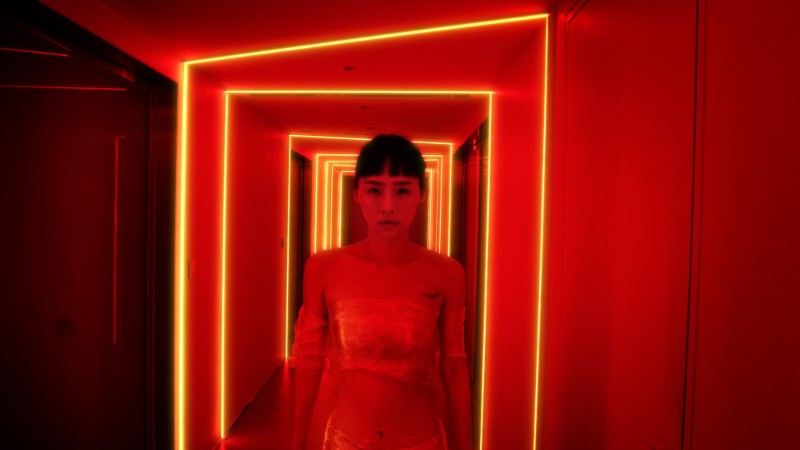 The story zigzags back and forth in time, and in the second half of the movie we learn the details of the extremely bizarre audition. The producer pits women against each other, turning the aspiring film stars into vile bitches (literally). The invidious female who ended second seeks to exact revenge on Nina. We also learn that Nina is a Lesbian in a relationship with a woman in her hometown back in the countryside. This is a very significant point, as Taiwan became the first country in Asia to legalise gay marriage just a few days ago. Nina, however, prioritises her career ahead of the romance. Perhaps because she thinks that the country isn’t prepared to accept a Lesbian actress just yet.

The film is dotted with strange imagery, bordering the surreal. A gecko moves inside a lamp. Nina is tortured on a stretcher inside a beauty clinic. She runs outside covered in plastic wrap and strangers snap her with their phone. Plus the audition and filming are extremely bizarre. And funny. Nina Wu balances out tension and humour extremely well.

Stick around until the very end of this 103-minute film. A lot comes full circle in the last sequence. This isn’t just a psychological thriller dotted with the bizarre gimmicks and narrative tricks. It has something very serious to say.

Nina Wu showed in the 72th Cannes International Film Festival, as part of the Un Certain Regard section (2019), when this piece was originally written. This isn’t the only film in the event dealing with a male director humiliating and manipulating the film actresses. Gaspar Noe does it too, if from a very different and far more disturbing perspective.

The film premieres in the UK in October in the London East Asia Film Festival (LEAFF). On Mubi on Tuesday, July 13th (2021)

Fugitive thriller set in a gloomy and despondent China excels in visual excellence and technical wizardry, yet its plot is tedious and banal - now available on Mubi [Read More...]

Take a 3D journey into the nostalgic memories of a lonely Chinese man, in a film that excels in technical wizardly and has flavours of Tarkosvky - now availabel on VoD! [Read More...]