"Dirty gem"
Texan Copper pays a heartfelt yet awkward tribute to his mother during her funeral, unbeknownst to others that his life is collapsing in more ways than one - now available on VoD

Why are public meltdowns so intriguing? There is something oddly satisfying about the complete breakdown of a social convention. It’s a cathartic primal scream signalling somebody is cracking and can no longer keep up appearances. It can be scarily unpredictable and pitiful to watch. However, there is also something defiantly liberating about it. It reveals that under the thin veneer of social norms, all humans who are struggling. Jim Cummings’s debut feature Thunder Road (he also pens and stars in the movie) captures the dual nature of such a breakdown. It’s a dramedy that will have you laughing and crying – often at the very same time.

Louisiana police officer Jim Arnaud (Cummings) is enduring the most difficult stage of his life. The film’s opening sequence sets the tone. At the funeral of his mother, Jim delivers a cringeworthy, heartbreaking and absurdly funny speech to a bewildered audience. His mental state begins to spiral out of control whilst he also grapples with a messy divorce and an estranged daughter. All the while, Jim continues to pretend that everything’s under control. He repeatedly tells his friend, “If you see me fighting an alligator, save the alligator”; it is unconvincing. 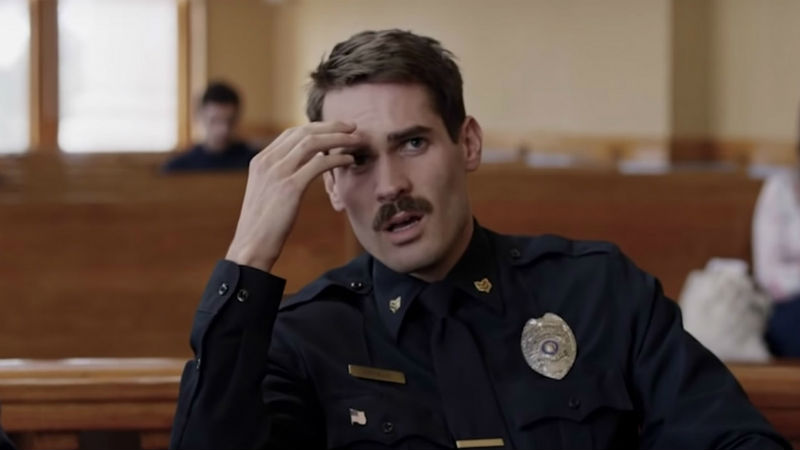 This is a very compelling character study, with Jim Cumming’s performance holding the film together. Despite the facade of the stoical police officer, his pain is entirely palpable. He allows moments of pain to flash across his face but never fully come to surface. The fact that these can be the film’s funniest moments, tells you a lot. Comedy and drama are amalgamated into one single beast, which sets a tone I’ve never felt before. It shouldn’t work but it does.

The film, however, does get a little repetitive at times. The narrative is rhythmically paced with similar fights and repressed emotions dotting the story. Yet, it adds up to the final conclusion: an incredibly satisfying and poignant gut-punch that will make you reach for your hankies.

Thunder Road is based on the eponymous short film (the basis for the opening scene), which wowed Sundance three years ago. You can watch the short film by clicking here. It is fascinating how Cummings developed a small idea in to a feature of such empathy and humour. Thunder Road is a superb tonal balancing act and it will make you question the lengths we go to keep our social veneer intact.

Thunder Road is in cinemas across the UK on Friday, May 31st. On VoD Friday, September 20th.

A victim of domestic abuse turns into for-hire vigilante, in this satisfying American revenge tale - in cinemas and also on digital HD on Friday, May 31st. [Read More...]