Ada (Mama Sané) and Souleiman (Ibrahima Traoré) are young and in love with each other. They walk along the beach and gaze into each other’s eyes. They hold hands and kiss. The next day Souleiman sets off on a primitive pirogue towards Spain, like many other refugees have done. Ada is left to contend with an arranged marriage to wealthy and arrogant Omar, whom she despises. After the ostentatious wedding ceremony, however, strange things begin to happen, such as the nuptial bed that suddenly catches on fire. The police suspect that Souleiman never left and is involved in the arson, and Ada is his accomplice.

This may sound like your traditional love story, but it isn’t. In reality, Atlantics is a an eerie ghost story imbued with religious, social and political commentary. Djinns (supernatural creatures in Islamic mythology) haunt the locals. The dead return in order to seek justice for their loves ones. Perhaps Soulemain died at sea and his ghost is playing tricks with the living?

The photography is nothing short of splendid. Shades of yellow and brown paint the screen at day time, while blue-hued tones populate the evening. A sad disco ball illuminates a group of lonely females. They are sullen because their men departed to Spain. The permanently misty weather and the raging Atlantic provide a mysterious backdrop, while screechy strings and synthesizers combined with local chanting offer the finish touch to the creepy atmosphere. 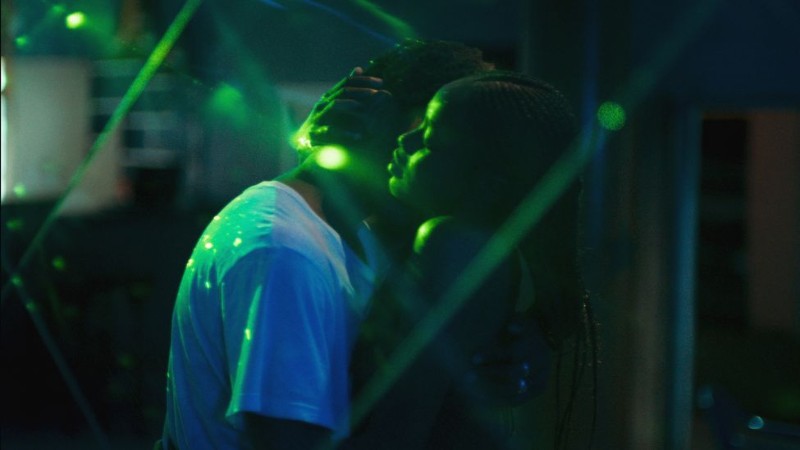 Ada is attempting to break away from old-fashioned traditions. She shuns her husband after receiving a text message from Soulemain. She’s convinced that her loved one has returned in order to be with her. She does not heed the advice of her parents, who beg her to settle with Omar. One of her friends expresses her desire to become Omar’s second wife. Ada is entirely indifferent. She does not wish to live in accordance to the Koran.

The story takes place somewhere on the coast of Senegal. A very large modern tower is being erected, in stark contrast to the impoverished districts elsewhere. The building workers haven’t been paid in three months. Perhaps some of them set off with Soulemain in search of a better life in Europe. The ubiquitous Atlantic represents a new opportunity, but it could become the final resting place for these poverty-stricken people.

While visually impressive and peculiar enough to keep you hooked for 104 minutes, Atlantique is also a little convoluted. It blends too many genre devices (sci-fi soundtrack, horror scares, romance ingredients and even a couple of noir artifices), and the script has quite a few loose ends. It could have done with less characters and twists. Still, not bad at all for a first-time director.

Atlantics premiered at the 72nd Cannes International Film Festival, when this piece was originally written. The director won the Festival’s Grand Prix, becoming the first ever black woman to do so. The film premieres in October in the UK as part of the Cambridge Film Festival. It’s out in cinemas on general release on Friday, November 29th.