"Filthy genius movie"
Renowned mountaineer pierces together his momentous life with the help of books and images from the past, as he encounters his worst enemy ever: memory loss - in cinemas Friday, May 10th.

Hamish MacInnes reflects, while remembering the details of an incredible life: “I find it very difficult to remember the beginning because I was so ill”. Once a magnificent Himalayan mountaineer, the years and an episode of delirium have taken away many of his memories. “There comes a time when everyone seems destined to end up on the scrapheap”, 84-year-old MacInnes potently says.”Decisions were made and that’s where I ended up. But I’m not dead yet.”

There’s a beautiful tapestry of stills, clips and photographs detailing the varying climbs MacInnes braved through the avalanches he himself confesses he has lost count on. Chief among his social circles is Monty Python thespian,turned travel documentarian, Michael Palin. Palin describes his subject as gifted with an aura that made you feel secure, fearlessly climbing even in the most arduous of conditions. Death hangs in every frame. As a younger man, Macinnes told an interviewee the necessity of warm clothing to survive the snow rimmed mountains. As an elderly man, the Scottish born adventurer discusses a different alternative to death. 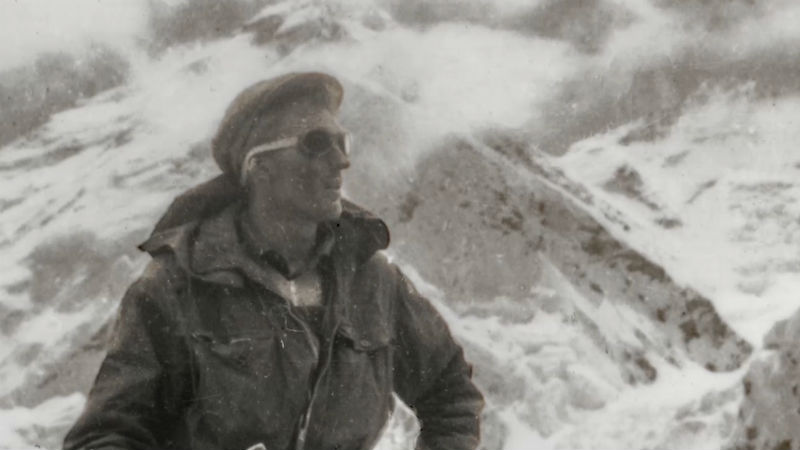 MacInnes was hospitalised after an accident outside of his own home, taken to Belford Hospital, Fort William, and bedded as a dementia patient. One of his escape attempts was seen as an act of suicide, as the hospital staff found him on a roof, when all he craved was a sense of freedom. That an expert of the open air and hills should be so cruelly confined is unnerving, yet the film offers many impossibly charming moments. Searching through his tool kits, MacInnes discusses some old ice axes, the early pioneers of future equipment. The warmth and importance one man can hold towards a piece of metal is devastatingly well crafted. MacInnes displayed a precocious talent for innovation even as a teenager. At 17, he designed his own motor!

The film’s director Robbie Fraser has described this film as one of memory more than mountain, and through the portmanteau of photos levied, he’s not wrong. And yet it’s a mountainous terrain for the lead interviewee, hauling himself through the angles he left behind by personally facing the peaks and icy components of his life. It’s a walk as terrifying as any he has done, a fight with his own self. But there is a wonderful sense of achievement hanging in the air, the film closing with the jaunty tune These Are My Mountains carrying through the closing credits. A triumph of human spirit!

Final Ascent: the Legend of Hamish McInnes is out in cinemas across the UK on Friday, May 10th.

Ain't no mountain high enough? Extreme climber wants to become the first person to achieve an impressive feat, with very little concern for the possible consequences of his actions - now available on VoD [Read More...]

Fancy some ice-cold pasta? Film set in the snowy Alps during the neolithic period takes inspiration from European mummy found in 1991, and it has flavours of spaghetti Western - now available for digital streaming [Read More...]