"Filthy genius movie"
Odds of survival below zero. Crashed airman must make his way across a frozen wasteland back to civilisation pulling a barely conscious, female helicopter pilot on a stretcher behind him - now available on VoD

A man (played by Danish actor Mads Mikkelsen, clad in a ton of arctic protective clothing) alone in an isolated, snow-covered landscape digs purposefully with a shovel in the snow. Making little channels and throwing the content of his shovel to one side. A harsh clang clang clang sounds repeatedly as he bashes the shovel against the surface to clear its blade. What he’s up to we have no idea. Until after some time, a big overhead shot shows us the letters SOS.

You might expect a film about a pilot stranded in the Arctic to start off with a plane crash. That would be a complex and expensive scene to shoot and might well upstage any narrative that followed. Brazilian-born director Penna admirably avoids that seemingly inevitable pitfall by starting his movie with his pilot already down. We see in considerable detail the aftermath of the crash, the downed, intact hulk of an aircraft now the pilot’s makeshift home in which he shelters from the elements. We watch him rig up fishing lines to attract food from below the ice to feed himself, a set-up soon damaged by a passing polar bear later seen in the distance. 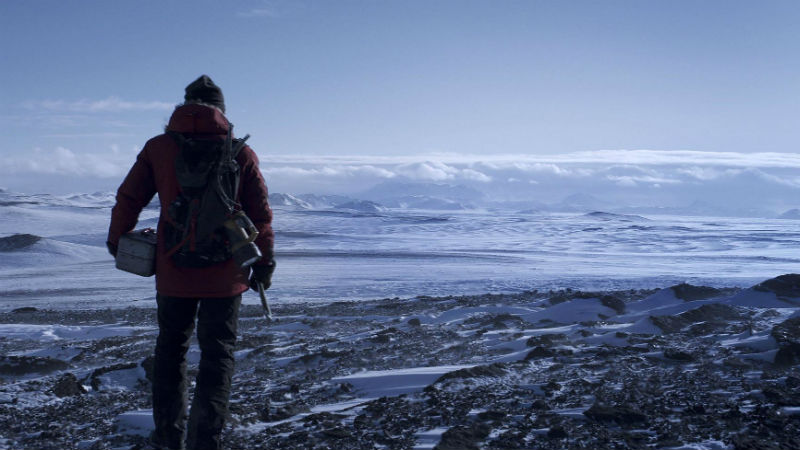 A helicopter appears over the horizon. His chance to be rescued. But then the unthinkable happens. Something goes wrong and the chopper crashes. He travels to the crash site. One of the two man crew is dead. The second crew member (Maria Thelma Smáradóttir) is alive but unconscious. Our pilot puts her on a stretcher and drags her body back to the safety of his own crashed plane. When she eventually wakes, she’s delirious. She can’t speak. She can barely move. He resolves to drag her across a frozen mountain range back to civilisation.

That subsequent journey comprises the bulk of the film. Penna knows exactly what resources he has to work with and utilising a lean and efficient script co-written with editor Ryan Morrison deploys them brilliantly. On his journey the pilot uses a map so that we always know, at least as much as he does, where we are on the journey. The environment, all shot for real in frozen tundra, is cold, inhospitable and deserted apart from the polar bear who you know is going to put in a closer appearance later on (and if you didn’t know that, there’s a shot in the trailer). 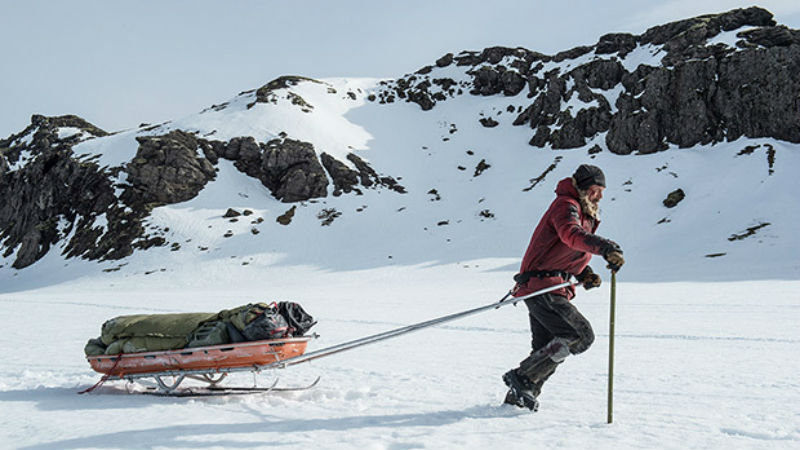 All that storytelling skill might count for nothing without either decent actors or skilful direction. Although Smáradóttir appears to not to have to do very much, the actress gives a commendably restrained and self-effacing turn as a woman who, when she’s actually conscious, is confused, traumatised and not really aware of what’s going on around her. However, the performance on which the film ultimately stands or falls is Mikkelsen’s. With scarcely a word of dialogue, you absolutely believe not only that he’s stranded in subzero conditions but also that he’s a smart cookie who will do whatever it takes to get himself – and later himself and the injured woman – to safety.

Whether or not the pilot achieves that goal we won’t tell you here because it would ruin your experience of the film, at least on your first viewing. Suffice to say, there are a number of scenes of incidents where the direction the narrative is taking suddenly switches due to circumstances outside the main protagonist’s control. These include the very last shot which sets you up for an ending you think you can see coming a mile off, then unexpectedly moves the goalposts to deliver something entirely different. I doubt you’ll see a film with a more satisfying ending this year.

In short, a film which makes exemplary use of sparse resources, stands on an amazing performance by its leading man and absolutely succeeds in telling the story it sets out to tell. Not to be missed!