"Dirty gem"
Would you go all the way (for the USA)? A US Secretary Of State hires a nerdy speechwriter to help her win the Presidential election in this romantic comedy - in cinemas from Friday, May 3rd

Unlike previous US Presidential romantic comedies, this one is about a woman President, or more accurately a woman Secretary Of State campaigning to be the next President. Charlotte Field (Charlize Theron) is savvy, smart and glamourous but has compromised the hard green environmentalist principals of her youth in order to attain political power. Meanwhile, poor and idealistic investigative journalist Fred Flarsky (Seth Rogen) has just been fired for an article which spoke out against powerful businessman and anti-environment political lobbyist turned publisher and Fred’s new employer Parker Wembley (Andy Serkis under a ton of self-designed make-up).

Charlotte and Fred have a shared past. When she was his teenage babysitter he had a crush on her. He also admirer her idealistic campaigning for school president. But now, she’s one of the world’s most powerful women while he’s an anorak on the rocks. 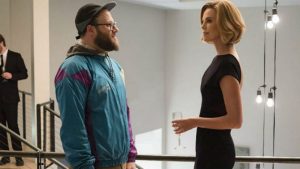 Out of a job and wallowing in self-pity, Fred is dragged by best mate and positive thinking, self-made entrepreneur Lance (O’Shea Jackson Jr.) to a posh event where the band Boyz II Men are playing. Charlotte is also there, doing her best to avoid Wembley who wants to bend her ear about some issue on which she takes an opposing view. Fred and Charlotte collide. Later, to the horror of her Chief Of Staff Maggie (June Diane Raphael) and ‘Body Man’ Tom (Ravi Patel), Charlotte tries Fred out then offers him a position as a speechwriter. This means he’ll be travelling around the world with her and her small team.

The clever screenplay by Liz Hannah – who wrote The Post (Steven Spielberg, 2017) as a spec script – and Dan Sterling – who cut his teeth writing episodes of dirty favourite animated series South Park and King Of The Hill – puts together an unlikely couple who, as it turns out, have a great deal more in common than either of them ever imagined. Journalists will be sympathetic to a script which gets inside some of the struggles of the writing process, although Hannah and Sterling wisely never get bogged down in such details. Offering some insight into the everyday working and living conditions of a high flying politician, they’re also not afraid to steer into implausible if hilarious high farce, such as when Fred takes Charlotte out at her request to “get wasted”, after which she must handle an international crisis while coming down from a drug high. 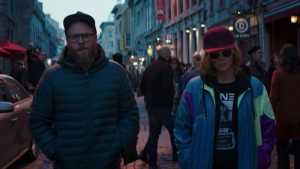 Comedy is notoriously the most difficult movie genre to pull off successfully. Although a strong script is key, much of this film’s success is also due to the casting and direction. It’s hard to imagine Fred played by anyone other than Seth Rogen, who manages to invest the character with not only a certain journalistic integrity but also the sort of nerdiness that has him wearing plastic raincoats and looking the very opposite of presentable. Theron may be known as a major acting talent, but her abilities and sense of timing as a comedian turn out to be astonishing. The rest of the cast, which includes a fair number of significant bit parts, impress too. And holding it all together is Levine, who previously directed cancer comedy 50/50 (2011) with Rogen and current producer Evan Goldberg. Long Shot is not a director’s film, it’s very much a collaborative piece utilising a variety of different talents. All of them, happily, possess the same vision. The result proves surprisingly effective on many levels.

Given the current state of things in the US with its humourless, right-wing, anti-environmentalist, post-truth President, there’s something refreshing about seeing a lightweight piece of entertainment which posits a capable woman setting out to take over the job from the current male incumbent and bringing in outsiders to enable her to push deeply held, pro-environment ideals. Recent developments in the UK with David Attenborough’s BBC show Climate Change – The Facts, the ongoing Extinction Rebellion protests in London and Greta Thunberg speaking to the UK Parliament may well mean the timing of its UK release couldn’t be better.

Long Shot is out in the UK on Friday, May 3rd. Watch the film trailer below:

British comedy about haggling mother and son accidentally shipped to Morocco humanises refugees and also functions as a trope for Brexit; it's a real delight to watch - in cinemas Friday, May 31st [Read More...]

Caustic and stringent satire of Silvio Berlusconi's Italy is one of the most subversive pieces of political filmmaking you will see in a long time - in cinemas Friday, April 19th [Read More...]