"Greasy movie"
One swallow does make a Summer! Wilfully wacky Icelandic comedy about radical environmental activist waging a war against the local aluminium factory has some delightful moments - now available on Mubi

On the surface, Halla (Halldóra Geirharõsdóttir) is your average Western middle-aged woman. She has a job in the local choir. She has a smile permanently attached to her face and a shining personality, which makes her very popular amongst her students. She dreams of becoming a mother, and is on the waiting list for a Ukrainian adoption agency. But she harbours a secret. A dark secret. Or a beautiful secret. Depending on views on vigilantism and extreme eco-activism.

Halla is waging a one-woman war against the local aluminium factory because she believes that it represents an environmental threat. The facilities could end up in the hands of greedy Chinese investors presumably with no regard for the health of our planet. Halla takes the matter into her own hands, literally. She uses her bow and arrow in order to carry out acts of industrial sabotage. At first, she knocks down cables, thereby cutting off the electricity supply of the factory. Despite the enormous risks associated, Halla becomes more audacious. Her technique eventually incorporates a chainsaw and even explosives. 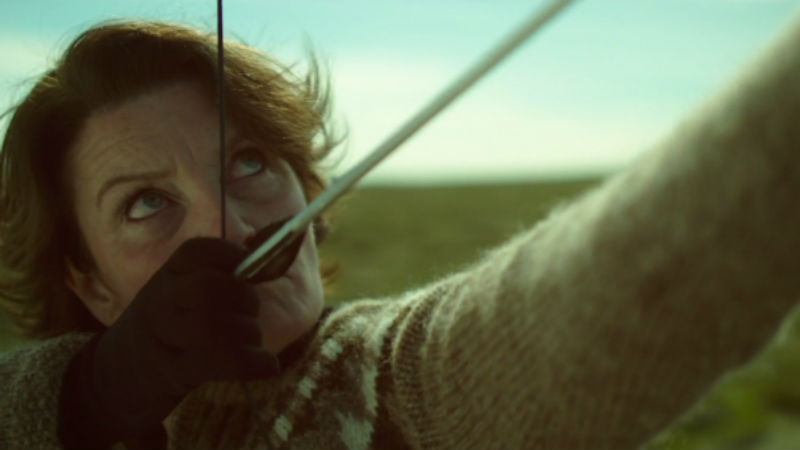 The repercussions of her actions are double-edged, the duality of vigilantism being laid bare. Some people support her, and some even willing to lend a helping hand. The media, however, describe the “Woman of the Mountain” as a violent terrorist. They blame her for the failing negotiations with the Chinese, and therefore accuse her of making the “average working man” poorer. It’s ironic that the Icelandic media and politicians opt to brand her a terrorist. This is a country very familiar with the misuse of anti-terrorism laws. One would expect these people to be a little more cautious when using the t-word.

The government sends the police to hunt down the mysterious activist. Men and infrared drones are out. Halla becomes increasingly sophisticated in her technique. She shields herself under an anti-infrared blanket, and even uses a dead sheep as a disguise. Parallel to all of this, she is finally given the opportunity to become a mother. There’s a young girl called Nika waiting to be picked up in the Ukraine. But will Halla manage to juggle her extreme eco-activism with becoming a mother in her later forties?

Halla has a twin sister called Ása (also played by Halldóra Geirharõsdóttir, who looks a lot like a younger Charlotte Rampling). Her sister finds redemption in a very different way. She meditates. Two very different types of revolution. Ása promotes an internal revolution (through reflection and introspection). Halla promotes an external revolution (through political actions). Woman at War finds a very peculiar way of reconciling these two female fighters, but I can’t tell you what it is without spoiling the filmending. 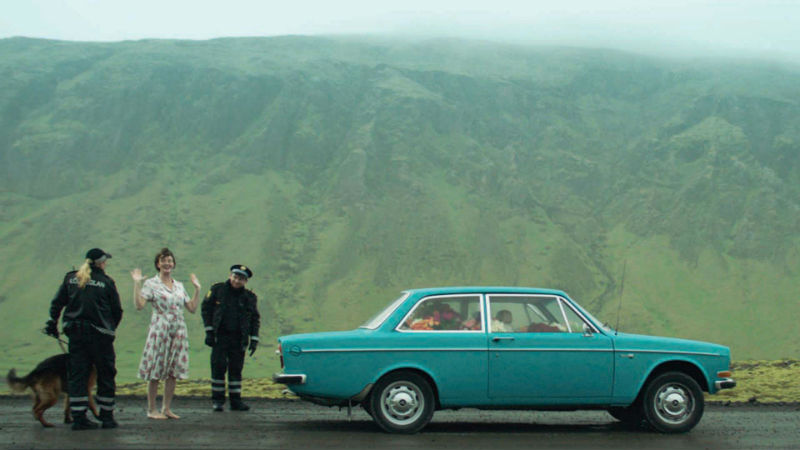 The music score is a remarkable feature. It’s an integral part of the film. Literally. The musicians blend into the sequence despite being topically disconnected to the narrative. They have a cigarette, and even check their phones. They appear in the most unlikely locations, such as a rooftop and the middle of the remote grasslands. There are two trios. One of them is composed of a trombonist, a pianist and a drummer, all male. The other is composed of three singing females, presumably of Ukrainian origin. The outcome is charming and quaint.

The photography of Woman at War is very satisfactory. The lunar plains, the rocky rifts, the hot water streams and the funky Hallgrimskirkja church of Reykjavik are all featured prominently throughout the movie.

But there are a few loose ends, too. This is a very hybrid international co-production. Iceland and the Ukraine have very little in common. This shouldn’t be a problem per se. But the ending in the Ukraine – while quite and engrossing – feels quite disconnected from the rest of the film. Maybe the director is trying to make a connection between Mother Earth and (human) motherhood. It doesn’t work completely. In my opinion, Woman at War would have been far more effective had it discarded the topic of motherhood and focused solely on the topic of extreme eco-activism.

Under the Tree (Undir trénu)

The seeds of mistrust have been sown! Icelandic comedy about neighbours feuding over tree that blocks the sun has brilliant moments of black humour, but doesn't gel together as a whole - now also available on Mubi [Read More...]