"Filthy genius movie"
The (not-so-) beautiful game. A WW2 PoW who becomes Manchester City’s goalkeeper is faced with anti-German prejudice both on and off the pitch - in cinemas from Friday, April 5th

Set in WW2 and its aftermath in Britain, this looks at first sight like a football movie. However, it becomes something else altogether by taking a long hard look at the plight of a person living in another country that’s heavily prejudiced against his own. Sadly one doesn’t have to look very far in present day, hostile environment Britain to see that such attitudes are currently very real and out in the open. This means that although this ostensibly covers real life events from over half a century ago, certain elements will likely resonate with contemporary UK audiences well beyond football fans.

German infantryman Bert Trautmann (David Kross) is captured by the British in WW2 and sent to a PoW camp just outside Manchester. Despite the presence of a few hardcore Nazis among the prisoners, most including Bert are ordinary Germans caught up in the conflict. Nevertheless, the English sergeant who runs the camp would have all of them shot were the decision his and makes their lives as difficult as possible. 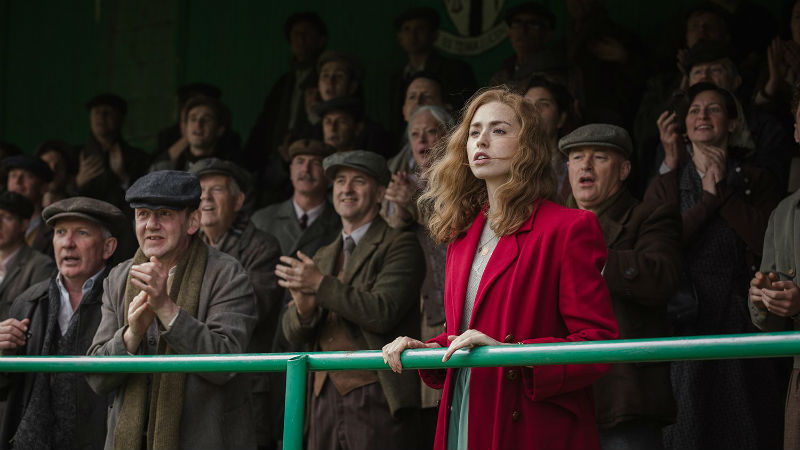 However Bert has something specific in his favour: for as long as he can remember, he’s loved playing football. A chance sighting of his goalkeeping skills by visiting shopkeeper and amateur team manager Jack Friar (John Henshaw) leads to Bert’s helping out at Jack’s shop although in reality he’s there to be the local team’s new goalie. Despite anti-German prejudice from Bert, his daughter Margaret (Freya Mavor) and members of the football team, Bert’s determination to make things work off the field and his footballing skills themselves lead not only to his eventual signing by Manchester City but also to romance, marriage and family life with Margaret.

The widespread hatred of the Germans by the English during and after the War here serves as the backdrop to Bert’s relationships with others. On an individual level, he always has to start by winning people over before they can accept him. Jack is motivated by the fact of his team’s current goalie not being very good rather than any altruistic desire to help an enemy alien find acceptance in England’s green and pleasant land. Margaret likewise dislikes Bert and his fellow countrymen for what they’ve inflicted on her country and countrymen, but being confronted with a real life, breathing human being forces her to re-examine the ideas that everyone around her unquestioningly accepts.

Such tensions are equally evident on a wider social level. Jack first presents Bert to the team as someone who can’t speak with a scarf round his throat, correctly guessing not only that the other players won’t take kindly to the German’s national identity as soon as he opens his mouth and speaks with an accent but also that they’ll be rapidly won over if they see him in action in goal. And when Bert turns professional his Man City career is dogged for some while by that city’s Jewish community leaders’ understandable misgivings regarding his presence. 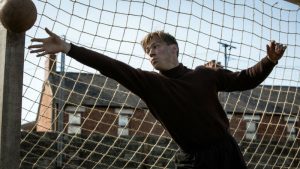 Overall, the film has much to say about how peace, forgiveness and reconciliation can broker a path through seemingly intractable and divisive prejudices to a much better place. It also delves into Bert’s internal torment as to whether he could have done more to change the outcome of an incident in his past when a superior German officer stole a football from a Jewish boy, teased him and then shot him dead. This memory periodically surfaces in Bert’s head until, in the final reel, events take an unexpected turn to put Bert and Margaret’s marriage under severe stress.

Working through these difficult and sometimes painful issues is underscored at the end as crowds of fans sing Abide With Me, a Christian hymn that’s been wrested away from its church roots and come to represent a deep spiritual truth about British people gathering together to watch, support and enjoy football. This in turn comes to stand for an acceptance of those who are different within wider British society. A helpful parable indeed for the UK’s present, troubled times.

The Keeper is out in the UK on Friday, April 5th. Watch the film trailer below:

Not just another colourful Christmas movie! Beautifully shot in grainy black and white, family drama explores the Aids epidemic and Christian values in Texas in the 1980s - in cinemas from Thursday, December 20th, and then on VoD on Monday, December 24th [Read More...]

Us and them. Following an outbreak that turns people into flesh-hungry zombies and filled Northern Ireland with prejudice against 'cured' zombies, the government has re-established basic law and order. But at what cost? - in cinemas from Friday, May 11th [Read More...]