"Filthy genius movie"
Caustic and stringent satire of Silvio Berlusconi's Italy is one of the most subversive pieces of political filmmaking you will see in a long time - in cinemas Friday, April 19th

The film opens with a fluffy sheep looking into the camera. The sheep wanders off towards a summer house. The sheep enters the living room. The air conditioner adjusts the temperature for human beings, but it is too much for the sheep. The sheep falls down dead, legs splayed on the floor. Italy is the poor, old sheep, fluffy and rather stupid and subject to the wiles of nasty, scheming human beings.

This is the first of a series of striking images of a society gone rotten, obsessed by consumerism, gravitating always to centres of power, using sex and money to get what it wants. A dustbin lorry skids off the road in central Rome, flies through the air, crashes into the old Forum and throws its rubbish everywhere. The rubbish descends and suddenly turns into objects coming down on a frenetic pool side rave organised by Sergio Morra (Riccardo Scamarcio) to impress his most important guest. Silvio Berlusconi. But guess what? Berlusconi doesn’t bother to turn up. 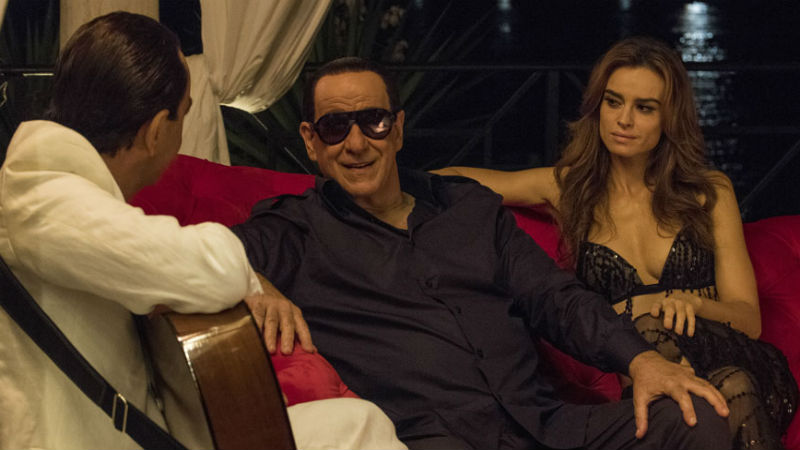 In the Italy of Silvio Berlusconi (Toni Servillo), everyone is on the make. Sex, money, power, entertainment, parties are what get you somewhere and even if the main player doesn’t turn up, what does that matter? At least, you had fun. “The left doesn’t understand me,” Berlusconi says to his personal assistant. “Dottore, you give people what they thirst for.” Democracy is a marketing opportunity. This is the key to Berlusconi and populist politics.

Yet, despite all the power and money, it is all pointless and pathetic. Berlusconi sits on a bed and attempts to seduce a girl called Stella. She turns him down flat and says that his breath smells. It is just an old man’s breath like her grandfather’s. Berlusconi is just an old man and she couldn’t care less. His wife Veronica (Elena Sofia Ricci) is bored by him and loses herself in books and exotic holidays and eventually wants to divorce him. He claims that he has a “volcano” in his garden to amuse his guests but, in fact, it is just a toy volcano that lights up and makes silly noises. 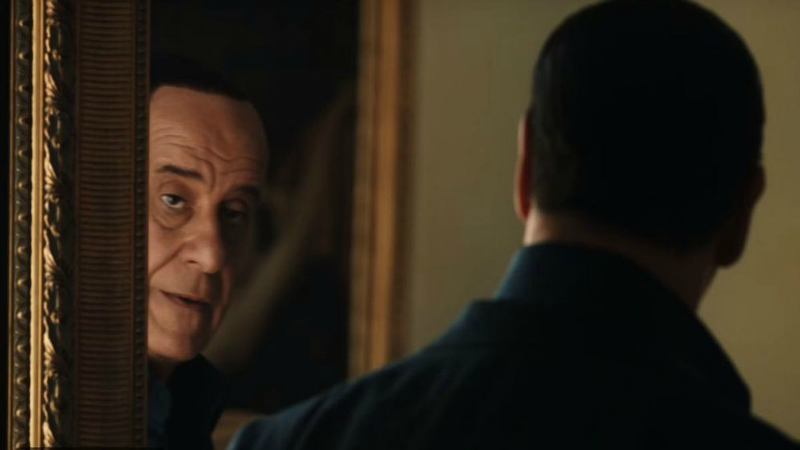 This is a film made with verve and panache. The “sceneggiatura” (production or staging – the Italian word is so effective here) is magnificent in the best tradition of Italian cinema. Toni Servillo’s performance matches the pathetic yet cynical ruthlessness of the old scoundrel with precision. Feminists may wish to avoid this film. It parades and exploits the female body with no shame at. But remember: this is shamelessness is of the man it depicts, and the women themselves are as voracious and ambitious as he is. They know what their most effective asset is, and they flaunt it.

Loro was originally made in two parts for Italian cinemas in Loro 1 and Loro 2 released on different dates. The version available in British cinema is a distillation running for 150 minutes. Some may find this a bit long and the narrative might be a little difficult to fo,llow for those without a detailed knowledge of Italian politics. Nevertheless it is a feast for the eyes. Never have I sat in a cinema where a citizen of a country has exhibited such contempt for his government. They say there is an old Italian saying, “Piove – governo ladro!” – “It’s raining, that thieving government!” Well, it rains a lot in Britain and… do you admire the government?

Loro is out in cinemas across the UK on Friday, April 19th. it’s a terrific kick in the balls to populist governments. It makes Michael Moore look like a pussy cat.

If Only I Were that Warrior

Lest we forget Italy's brutal colonial past - new doc available now on VoD exposes the wounds of Italian fascism in Africa, and how war criminals were never brought to justice - thanks to Britain! [Read More...]

Try walking in my shoes: Italian classic set just before the turn of the 20th century is a harsh reminder that social mobility is an affront to the elites, and that those too busy surviving hardly have the time for political engagement - out in cinemas this week [Read More...]