Under the Silver Lake

Bloated, hyped, panned, lionised. David Robert Mitchell’s follow-up to the inventive Horror flick It Follows (2015) arrives in cinemas and on Mubi day-and-date this week. A year on from its decidedly mixed response at Cannes, the cluttered, uncompromising vision of Under the Silver Lake is destined to accrue a cult, midnight movie reputation.

Set in an uber-lush LA, full of foliage and animals and animal killers, after Andrew Garfield’s loser Sam gets caught watching Riley Keough through some binoculars and getting stoned together, they set a date to hook up tomorrow. But the next day, she’s nowhere to be found. Entire flat empty, leave no trace. This sends Garfield into a paranoid, spiralling quest through Los Angeles, where he uncovers a thousand conspiracies and points the finger at everyone but himself. The camerawork is lush, the music by Disasterpiece is great, intoxicating you on all that LA hedonism, with a bonerfied, libido deconstruction on the level of Thomas Pynchon, whose tone is captured better here than in literal adaptation, Inherent Vice (Paul Thomas Anderson, 2014). 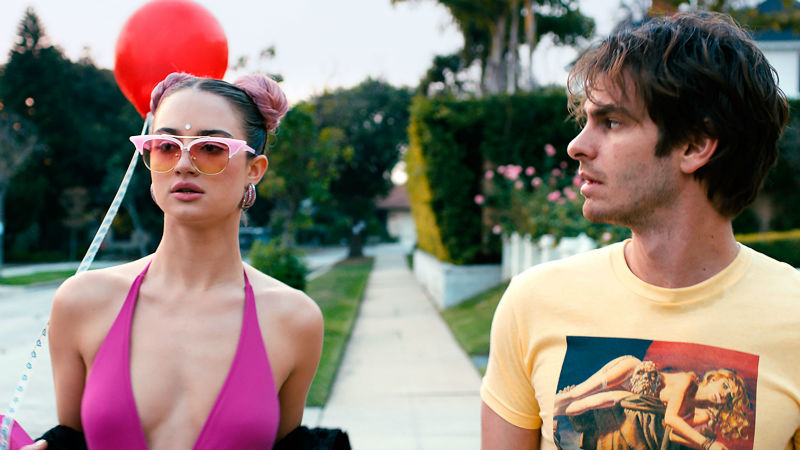 Mitchell has built a city where nothing really leads anywhere but back up your own behind. Yes, it’s self-indulgent, but so is this quite hateful lead character played with adaptive skill by Andrew Garfield. The way he runs across the screen, flapping his stiff hands by his side, is hilarious. His sneer, hiding behind his shades, his dejection every time someone points out how bad he smells. It’s funny, Little Tramp material. And then Mitchell undercuts that sympathy by having Sam beat up a child.

As an audience identification figure, he sucks. And yet are we asked to align with Garfield again and again, and Mitchell is not always in control our understanding of exactly where we should be in opposition to him. That’s what lets the film down, but also what makes it interesting to figure out. His journey, for all of the film’s complicated, shaggy dog nonsense, doesn’t take Sam particularly far outside of his own social milieu. He’s is already peripherally connected to almost everyone he encounters, so much of his conspiracizing is just about a social group that he can’t really infiltrate. The failure of the male ego.

Mitchell has been compared, unfavourably, to David Lynch, for his employment of surrealism within the metier of the classic Hollywood. But his style doesn’t resemble Lynch as much as both directors build characters who are self-consciously situated within an intertextual world.

The mannered costumes, like LA is a perma-fancy dress party, brought to mind Rivette’s play acting in his fantasy films like Duelle (1976). Under the Silver Lake always seems on the verge of falling all the way into those fantastical elements. There’s nothing fantastical however about the way that all the women in Sam’s sphere, young aspiring starlets the lot of them, are being infantalised and sexually exploited by this world, forced to keep up those movie star smiles and behave placidly even around a broke dude who smells like skunk spray. 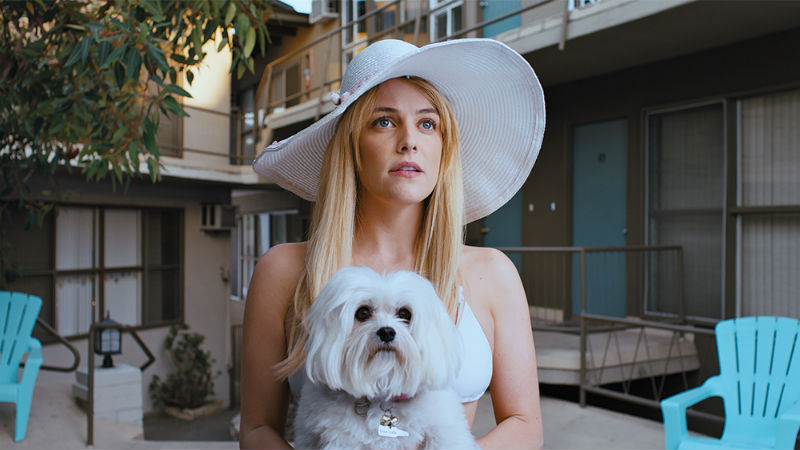 Indeed, charges of sexism against the films gaze on its female characters seem to be missing the point. Isn’t it clear to the point of bluntness about their objectification? Isn’t there a scene where Garfield and Grace use a drone to spy on a woman and then lose their boners when she begins to cry as she strips? Isn’t Garfields ineffectiveness as a person, in forming relationships, in developing as a person, punished by the film? Don’t the glimpses of conspiracy that are uncovered all revolve around the power that incredibly rich and powerful men hold over vulnerable people? Do viewers really need these things spoken aloud? The visual system of the film, from these plot beats down to the production and, of course, the fact that Garfield smells like a literal skunk for much of the run time, tell us the answers. Does a character need to placate the audience by appearing just verbally admonish him? Hang on, that happens too!

Perhaps Mitchell is throwing too much at the audience for a real coherence to be found. But its approach to mystery doesn’t lead you to expect every loose end to be closed off as much as to just savour the morsels it throws your way. You are forced to work through Sam’s bad decisions, the convoluted mystery, the novelistic digressions. Some of the places Under the Silver Lake reaches are perhaps too easy, as though Mitchell’s grasp of the galaxy-brain-society stuff he’s talking about is all surface level, like he himself is lost in the mire that is modern life. But you couldn’t have a film about self-indulgence that doesn’t swim in those waters itself, could you?