"Greasy movie"
War is ugly and absurd! Sergei Loznitsa's twisted and grotesque allegory of the ongoing War in Donbass has good moments but lacks the lyrical genius of his previous works - in cinemas on Friday, April 26th, and on VoD on Monday, April 29th

The War in Donbass is now five years old. In March 2014, protests by various pro-Russian and anti-government groups took place in the Donetsk and Luhansk oblasts of the country, which are collectively described as the Donbass region. More than two thirds of the population of Donbass are ethnically Russian, and Russian is the de facto language of region. The protests quickly morphed into an armed conflict, and Moscow has been repeatedly accused of supporting the separatist struggle (something which they deny). Donbass is a fictionalised account of the conflict divided into 13 very peculiar and mostly unconnected segments.

The film has some very good moments. An angry mob humiliates an alleged “exterminator” tied to a lamppost in a town square in broad daylight. They punch him, they kick him, an old woman beats him up with a stick, they shout profanities. They demand answers, but the man simply refuses to speak. A woman dumps a bucket of faces on the head of a newspaper editor who wrote an article stating that she received a large bribe. She wants him to feel as dirty as she did (when the libel was published). 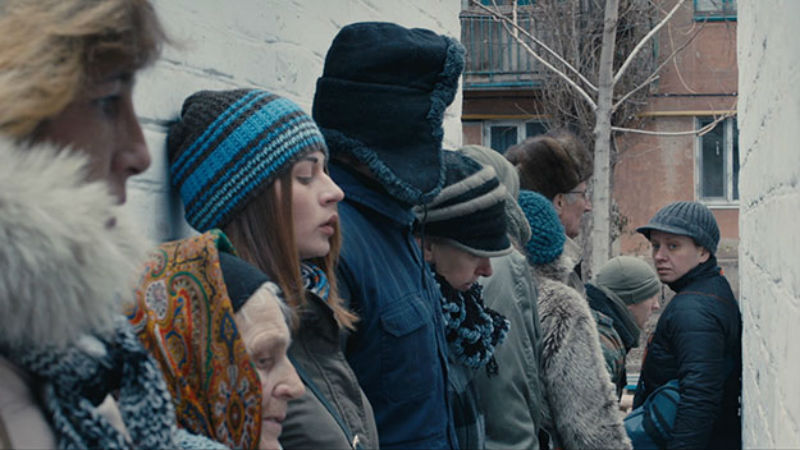 A German journalist is confronted about Hitler and his “fascist” past. The separatists too are often described as fascists. A well-dressed woman tries to convince her haggard mother to leave an overcrowded shelter in favour of a safe and salubrious dwelling, but she refuses to budge (presumably in solidarity with her people, or attachment to the land). The images of the filthy and jam-packed shelter, with the walls covered in mould, are very realistic. And so on.

The first two thirds of Donbass feel a lot like a documentary, until the movie descends into the farcical and allegorical in the last few segments. A very peculiar wedding takes place (pictured at the top). This is the ugliest and also most absurd part of the film. The ceremony is conducted under the flag of Novorossiya (literally, “New Russia”, a proposed accolade for separatist entity). The guests laugh. No one is taking the sacrament seriously, particularly the bride and the groom. It’s as if the director was saying: “a union between Russia and Donbass is laughable, hideous and extremely undesirable”. This is an anti-war movie and a very anti-Russian statement. Loznitsa is Belorussian by birth, but has studied and lived in Kiev most of his life, and his affiliation clearly lies with the Ukrainian government, who also helped to finance the film. 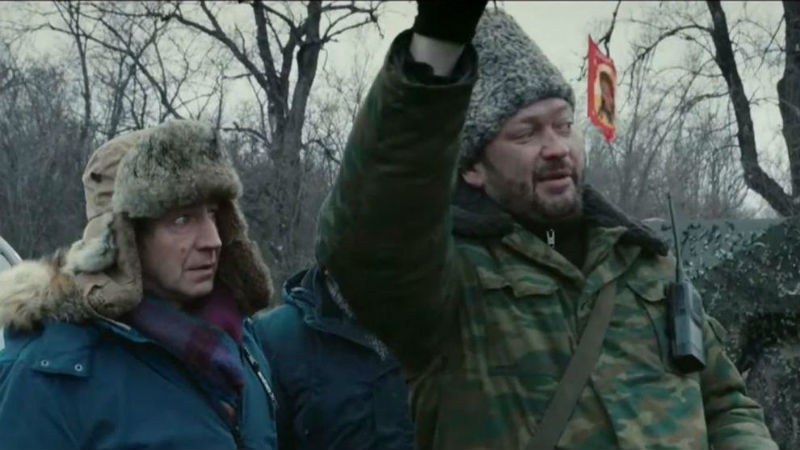 Donbass is interesting enough to watch, and the anti-war message is is very clear. But it also gets a little confusing. Nothing is contextualised (the information in the first paragraph of this review is not described in the film). It’s not always possible to determine which side is side. Perhaps I lack the cultural and political knowledge. Or perhaps the director intended to confounds his viewers in order to emphasise the pointlessness of war. I’m not entirely sure. One way or another, the outcome is a little disjointed and incoherent. At more than two hours of duration, the narrative gets jumbled up. Overall, Donbass lacks the lyrical excellence of Loznitsa’s previous film A Gentle Creature (2017). And it also lacks the punch-factor. The violence, the explosions and murder sequences feel a little contrived and banal.

Donbass won the Best Director prize of the Un Certain Regard section of Cannes International Film Festival in 2018. It is out in cinemas across the UK on Friday, April 26th, and then on VoD on Monday, April 29th.