"Dirty gem"
The Marvel Cinematic Universe delivers its first film with a female protagonist, in one of the most anticipated movies of the year - in cinemas from Friday, March 8th

This immediately plunges the audience into confusion: you really don’t know where you are. The viewer is overwhelmed by a barrage of chaotic images the sense of which will only become clear during the course of the narrative. It’s also one of those movies which starts off in an alien, parallel or mythological universe only for that to give way to Earth about 10 minutes in to the proceedings.

So, a landscape littered with debris of wrecked craft. Characters in strange costumes bearing weapons. And star Brie Larson’s character Vers in the middle of it all, trying to comprehend as are we what’s going on as she takes part in a commando style raid to rescue a spy on an alien planet, is captured and subjected to a machine which probes the deep recesses of her brain in the form of her memories, escapes and crashes to Earth (i.e. the US) in the 1990s straight through the ceiling of a Blockbuster Video store.

Overall, the plot is punctuated by the requisite, thrilling intermittent fight scenes and augmented with state of the art special effects technology. It involves Marvel Cinematic Universe (MCU) regular Nick Fury (Samuel L. Jackson) and fellow S.H.I.E.L.D. agents including Coulson (Clark Gregg) and Keller (Ben Mendelsohn), a hero warrior race called the Kree of whom Vers is a member, at least to start with, and their sworn shapeshifting, terrorist enemies the Skrull. The Kree are led by Yon-Rogg (Jude Law). 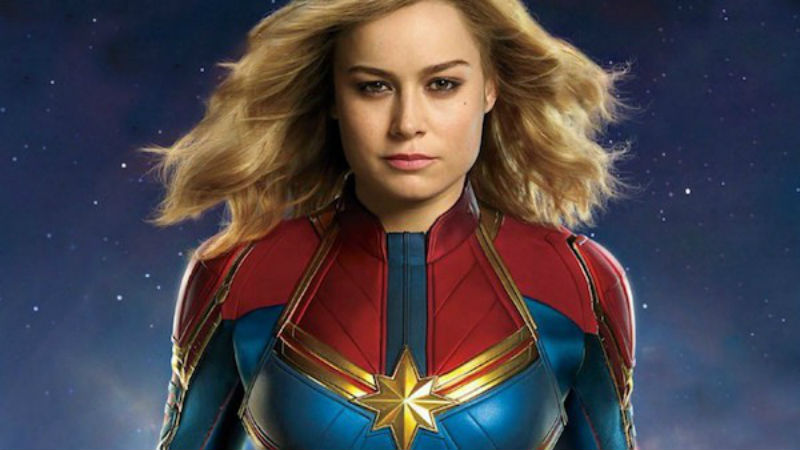 The film has been pitched at the public as the first MCU film to have a super-heroine rather than a hero as its central character. In the comics, there have been several different Captain Marvels of whom the Carol Danvers (Vers’ name on Earth) is one of the later ones. To make that work on the screen, you need an actress with some considerable presence. Ever since seeing Larson in Short Term 12 (Destin Daniel Cretton, 2013), where she plays a counsellor in a short stay home for difficult teenagers, I’ve thought she was extremely gifted and her work in Captain Marvel mostly confirms that.

“Mostly” because there are moments where Vers/Carol Danvers is fighting men (or at least male aliens) and giving as good as she gets somehow doesn’t quite work on the screen. I accept that the plot gives her a superpower derived from being in the path of an explosive blast involving an experimental aircraft drive, so she should be more powerful than everyone else around her, but there’s part of my brain that just won’t accept that. And it’s something about this particular film: I never had this problem with, for example, Scarlett Johansson playing Black Widow in the Avengers movies.

More convincing is the idea of Carol Danvers and her African American work colleague and friend Maria Rambeau (Lashana Lynch) being female test pilots in a man’s world. Likewise, when the Kree take her to commune with their Supreme Intelligence, the AI which helps them make all their decisions, that entity appears to her in the form of someone she’ll readily accept – a grey-haired Annette Bening who later appears as a darker-haired mentor from way back in Carol’s life. This is very clever. The film plays on the notion that women are generally much better than men at networking. The little girls who play Maria’s 11-year-old daughter Monica (Akira Akbar) and the briefly seen young Carol at 13 (Mckenna Grace) and six (London Fuller) years of age also impress.

That said, we’ve only come so far – Fury is (obviously) male and both the groups of Kree and Skrulls represented here are led by males. The Kree at least have one more operative besides Larson’s Vers in the form of sharp shooting Minn-Erva (Gemma Chan) although the Skrull womenfolk and children are kept out of harm’s way while the men do all the fighting. 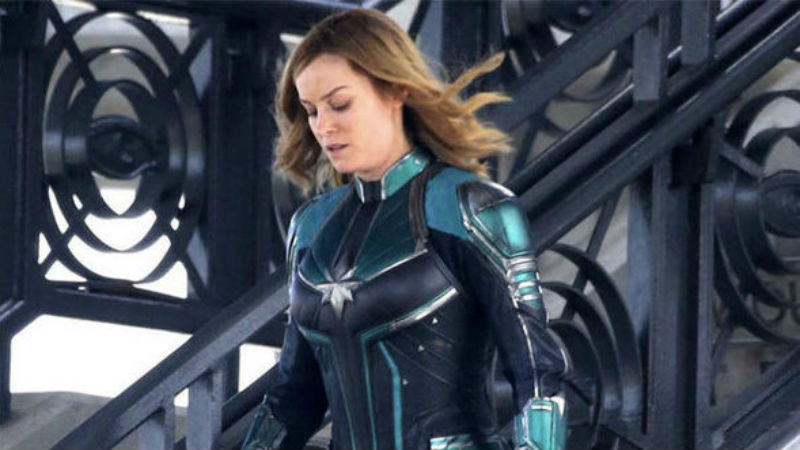 The shapeshifting Skrulls allow for them to appear as anyone at anytime – always a great plot device – here giving rise to a number of scenes where someone isn’t who the appear to be. It also gives rise to the film’s one serious misstep, when and old lady on a train is identified as a Skrull and battles violently with Brie Larson in the carriage. An enthralling surprise and a gripping action sequence indeed, but hardly appropriate as an image of older people who are generally more vulnerable than most.

Otherwise, while the action sequences are enjoyable and the plot strong enough to satisfy the MCU audience and profit margins, the film’s real pleasures are to be found elsewhere, in the relationships of the characters in the parts where the action slows or pauses enough to explore them. Doubtless this is not why most of the audience are there, but it makes for an altogether more convincing film.

For a while Captain Marvel even manages to pull off the trick of Alien (Ridley Scott, 1979) whereby a good portion of the audience are wondering whether the friendly cat tagging along with sympathetic human characters is in fact an alien. And for true MCU geeks, there are not one but two little expository scenes at the end. Although Captain Marvel is a standalone film, these scenes link it to the upcoming Avengers: Endgame (2019).

Finally, curiously, no-one in the film ever refers to the central character as Captain Marvel. Although that’s clearly who Vers/Carol Danvers is.

Captain Marvel is out in the UK on Friday, March 8th. Watch the film trailers below: