It all starts in 2013. Sao Paulo students take to the streets in order to demand that a R$0.20 (circa £0.04) price hike in the bus fare gets slashed. These young people are part of broader movement called MPL (Free Pass Movement, in free translation), which demands that transport is free for all. The protests quickly grow and take place in virtually every corner of Brazil. Suddenly, millions of Brazilians are out on the streets. The movement culminates in the peaceful invasion of the Brazilian Congress. In response to the national commotion, president Dilma announces that 50% of oil revenues would be spent in education.

The outcome of such political activity, however, was double-edged. On one hand, young people felt more energised, ready to demand better education and equal opportunities. On the other hand, many ugly beasts are let out of the cage. Reactionary movements seized the opportunity in 2013 and joined the protests with a very different agenda. They were not concerned about the R$0.20, education and equality. Instead, they wanted to remove president Dilma and the Workers’ Party from power, and to implement an ultra neo-liberal agenda. We learn that shortly after the 2016 coup d’état that removed Dilma from office in 2016, education and healthcare spend was frozen for 20 years. 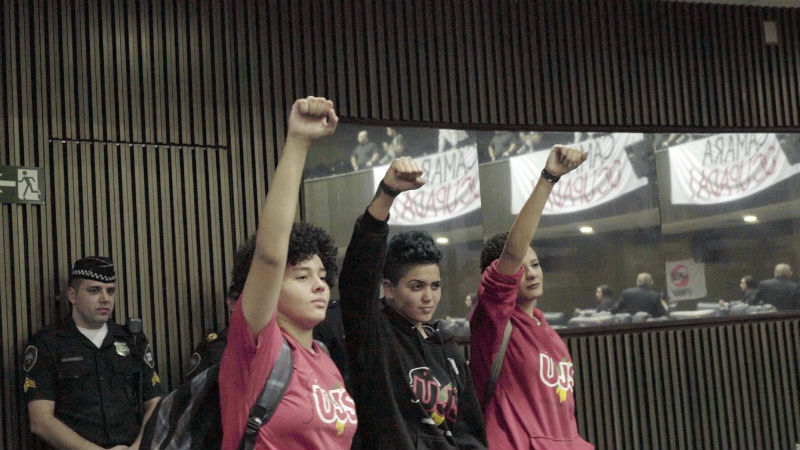 Your turn focuses on the continuous activity of the student movement since, in the country’s largest state of Sao Paulo. It follows the footsteps of three students activists and union leaders Lukas Koka Penteado, Nayara Souza and Mariana Jesus as their struggle against the state’s authoritarian and oppressive establishment. They occupy one, two and then suddenly thousands of schools and universities in protest against the education expenditure freeze. A corruption scandal involving school lunches is also at the top of their agenda. Their encounter police violence, get beaten up and humiliated along the way. Stun bombs are constantly thrown at at the studente. Each bomb represents 500 school lunches. Throughout the film, we see more than 16,000 school lunches “being exploded”.

The duality of grassroots activism is exposed in Your Turn. The government and the media attempt to present these young revolutionaries as violent vandals and troublemakers. The images beg to differ. The violence is invariably carried out by the police. And the activists do not destroy any of the buildings occupied. They are claiming what belongs to them, and demanding “a better future”. Race, gender and sexuality is also a central topic. These people believe that their body is central to their struggle. “Body freedom is a revolutionary act”, we are told. Marginalised Brazilians – women, Blacks and LGBT – are at the frontline of the battle.

The incarceration of young Brazilian – particularly the Black and poor – represents a major challenge. The number of prisons in Sao Paulo quadrupled between 2008 and 2015. Similarly to the US. This did not have a positive impact on crime rates, which continue to soar. Brazil now has the third highest prison population in the world, while also being in the top 10 most violent countries. Something clearly isn’t right. Lukas, Nayara and Mariana believe that the solution is building more schools, instead of more prisons. 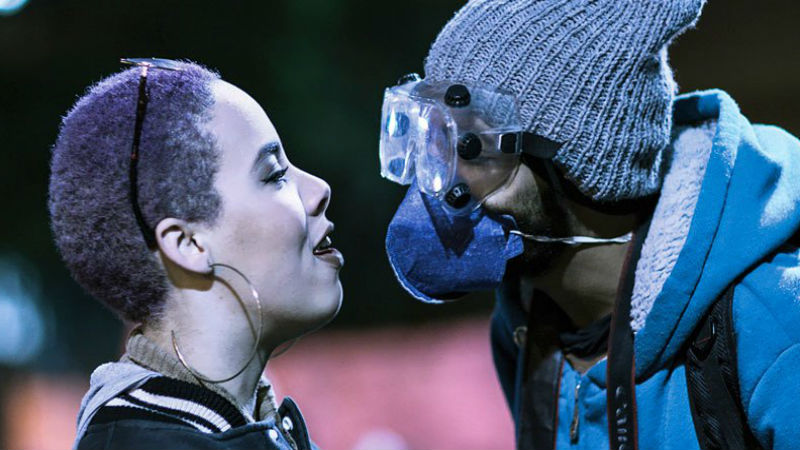 The film montage is exquisite. Talking heads interviews are blended with street and television footage, and part of the film is narrated almost like a funk song, with electronic beats and strings. Your Turn is energetic and young at heart.

The final message, however, is bleak. We are reminded that extreme right wing Jair Bolsonaro became Brazilian president this year, and that he vowed “end all types of activism” in his first day in office. A sequence in the middle of the movie epitomises its tragic closure. A woman is bleeding the floor after being clubbed down by policemen. It looks like she’s about to die, presumably due to a concussion. Those around her try to console: “you survived the military dictatorship”. She then laments: “I can’t believe it’s happening again”. Images of the military are then shown.

There is also a message of defiance. The movie title itself is a call-to-action. Now it your turn to take to the streets and fight against fascism!

Your Turn premiered at the Berlin Film Festival in 2019, where it won two prizes: the Amnesty International Film Award and the Independent Peace Film Prize. Stay tuned for UK dates. It shows at the Sheffield Doc Fest in June.

Kettling of The Voices

Police brutality that muffles democratic protests: students demonstrating against a rise in tuition fees in 2010 encountered a very violent and unexpected enemy - this investigative documentary is showing at the East End Film Festival [Read More...]