Based on Yukito Kishiro’s manga Gunnm, this U$200 million production is marketed as “by the producers of Titanic and Avatar” (blockbusters directed by James Cameron respectively in 1997 and 2009). This approach recalls the good ol’ Hollywood times when the director’s name was secondary, and then filmmaker was perceived as a mostly secondary artist. The three film producers James Cameron, Jon Landau and Robert Rodriguez attended the film’s world premiere last night at the Cineworld Imax Leicester Square.

The outcome is a film flooded with special effects, top-drawer cast names and violence, and also very impersonal. Without a strong identity. It’s so formulaic that it feels like any one the three producers could have directed it. This might explain why the director’s name remains so secondary.

The year is 2,563, and a post-apocalyptic Earth is still recovering from a major incident three centuries earlier described simply as “The Fall”. The film follows Alita (Rosa Salazar), a cyborg encountered in a dump, almost entirely destroyed. She’s savaged by Dr Ido (Christopher Waltz), who gives her a new body and new lease of life. Dr Ido is an unscrupulous dealer of mechanical body parts, which he purchases from the black market. Young criminals go around cutting up parts from fully functioning cyborgs, and handing those to Dr Ido. Despite his wrongdoings, Dr Ido is very fond of Alita, and they develop some sort of father-daughter bond. 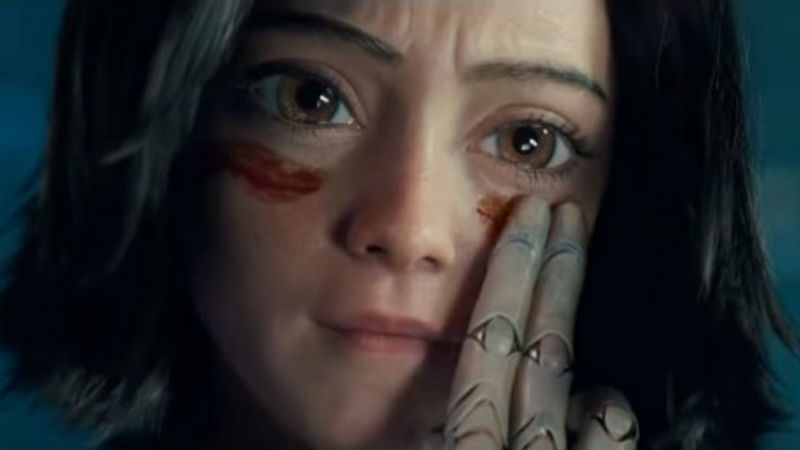 Alita’s memories from the past, however are gone. The only recollections that she has are from the past few days, since she was brought back to life. Gradually, it surfaces that Alita has an extraordinary past and a super strength, both physical and psychological. She has to fight against her nemeses Dr Chiren (Jennifer Connelly), an ex-partner of Ido, and Vector (Mahershala Ali), a man who rigs Motorball combat matches. The final three quarters of this 122-minute film consist mostly of Alita battling other machines. The storyline is a little confusing, and I’m not ever entirely sure why the evil guys/machines are so evil. I had to look up the film synopsis in order to understand the role of Vector. Coherence is secondary. It is the special effects and the violence that prevail. And it gets quite tedious.

Here violence is the main currency. Limbs fly everywhere, gliding blades and tentacles cut bodies into pieces, faces are crushed mercilessly, an animal gets killed. There is very little blood because most of the fighters are cyborgs. The exception is the blood of a dog brutally murdered by a giant cyborg, which Alita inexplicably applies to her face (see image above). I find the representation of bloodless violence in film far more dangerous than blood-stained, reddish violence. That’s because bloodless, sanitised violence is less disturbing and therefore more appealing. It makes vicious and mortal fighting look fun and very desirable.

The violence is mitigated by a half-baked romance between Alita and the human Hugo (the newcomer Keean Johnson). This is where the filmmaker tries to infuse the story with the values of love, devotion and loyalty, but instead he just slips into empty platitudes. Alita: Battle Angel lacks any profound connotation, unlike – for example – its “predecessor” Avatar with its clearcut environment message. 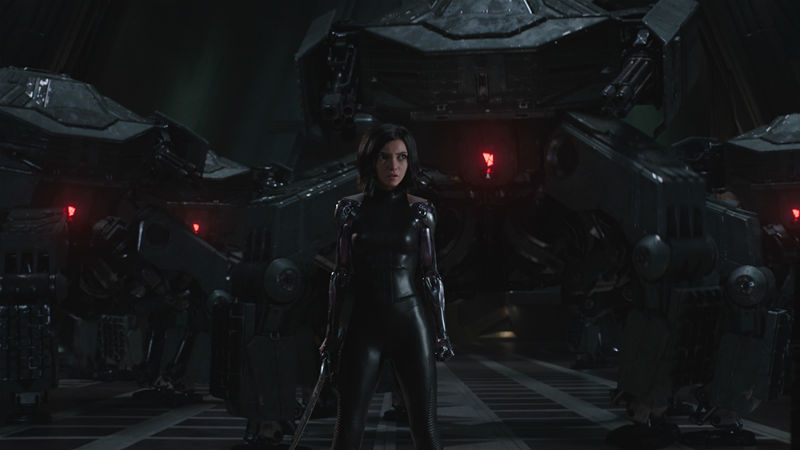 The female empowerment element deserves a mention. Yet this is hardly original. Sigourney Weaver’s Ripley of Ridley Scott’s Alien (1978) turned 40 years old just a few months ago. And while one could argue that Ripley wasn’t quite a female heroine because she was highly masculinised (with short hair and a unisex name), there have been plenty of more feminine heroines since, including Lara Croft of Tom Raider.

Aesthetically speaking, Alita: Battle Angel does have its achievements. The graphics of the impoverished Iron City where Alita is found and the elusive flying city of Zalem/Tiphares aboveare quite impressive. Yet, there’s nothing new about it. The urban settings look a lot like Fritz Lang’s Metropolis (1927) infused with the plush post-modern colours and textures of Ridley Scott’s Blade Runner (1982), while Alita’s gigantic eyes are taken straight out of Avatar.

The ending of the film is a clear reference to one of James Cameron’s most successful movies. It feels like a tribute to the Canadian-born director/producer and one of the most emblematic scenes in the history of filmmaking. Of course I can’t tell you exactly what it is without spoiling the film for you.

Alita: Battle Angel is out in cinemas across the UK on Wednesday, February 6th (2019). It’s out in the US on February 14th. It will probably spawn a sequel or two, maybe even a prequel (time becomes a very fluid and non-linear concept when it comes to sci-fi. I will probably give them a miss. On Disney+ on Friday, July 2nd (2021).

Not just your average zombie! Fantasy horror is based on the eponymous manga series, in which flesh-eating colourful tentacled monsters with can only survive by hiding their true nature and living among real humans - in cinemas January 31st [Read More...]