Many people have never heard of the Yazidis, a ethno-religious minority mostly based in Iraq and Syria. Yazidism is one of the oldest religions in the world, combining elements and Christianity, Judaism and Islam. There are roughly one million Yazidis in the world, mostly in Iraq and Syria, and they are being fiercely persecuted by Isis. Young women, female teens and girls as young as nine as being used as sex slaves, while others simply exterminated.

Twenty-three-year-old Nadia Murad has experienced the horrors of Daesh/Isis firsthand. She was born in the village of Kocho in the Sinjar District of Iraq. In 2014 was held captive as a sex slave, repeatedly raped by hordes of men, beaten and burnt with cigarettes. In 2015, she began touring the world denouncing the predicament of her people. We learn that she visited 17 countries in just a few months (talking about her ordeal in each one of them) until she finally addressed the United Nations Security Council on the issue of human trafficking and conflict in December the same year. 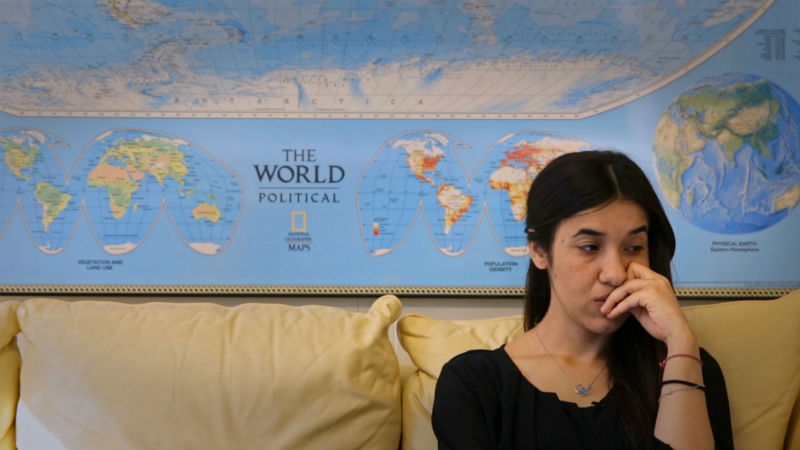 On Her Shoulder investigates – as the film title suggests – the heavy burden that Nadia has to carry, being virtually the only Yazidi to receive widespread media attention and international solidarity. She has to represent her entire people almost entirely on her own. She’s not particularly outspoken. She’s camera-shy, timid and demure. She’s a far cry from the far more feisty Yazidi girls of Girls of the Sun (Eva Hussan, 2018). Murad is not Malala Yousafzai either; we’re told “she does not want to be an activist, a politician, in fact anything, she just wants to be a girl from the village”. This might explain why she’s distant and impenetrable. She did not know what female empowerment meant until 2015, when she learnt about progressive values and human rights.

She clarifies that she lost 18 relatives to murder and sexual slavery, and that she did not even have the chance to say goodbye to her mother. Living with the memories and the humiliation has made her a very introspective human being. Having to tell and retell her tragic story, and juggling with an incessant flurry of questions (“how did it happen?”, “how many men?”, “what did you do?”, ” what happened to other girls?”, etc) is extremely painful, and her continuous struggle is entirely palpable. 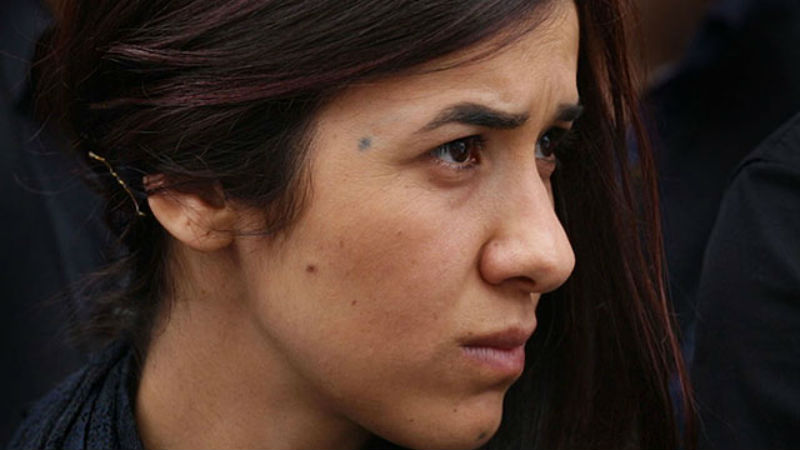 Nadia’s experience is shocking, and her fight to raise awareness of her people despite her introspective personality is touching and commendable. On Her Shoulders, however, is far less moving as a cinematic experience. The director’s fly-on-the-wall approach combined with Nadia’s monotonous speech make the film a little tedious. While the director deserves credit for being respectful and non-exploitative, the film lacks a little ingeniousness and imagination. It consists almost entirely of Nadia being followed around the UN and other places. There is hardly any archive footage, graphics and talking heads. The outcome is somewhat impersonal. You you feel like you are sitting on a table, in a room, or walking down the street with a bunch of strangers.

The film culminates with human rights lawyer Amal Clooney (George Clooney’s wife) representing Murad in the United Nations. The young Yazidi woman becomes Goodwill Ambassador for Survivors of Human Trafficking. It ends up with a heartbreaking confession: no matter how much the world celebrates her, Nadia still sees herself as “worthless”, as a result of the rape ordeal.

On Her Shoulders is in selected cinemas across the UK on Friday, January 25th. It’s out on VoD on Friday, February 1st.

When altruism knows no bounds: army colonel Fakhir Berwari devoted his time to defusing mines in Iraq, despite knowing that his dangerous job would almost inevitably lead to his very own death - in cinemas April 27th [Read More...]