"Dirty gem"
Ultra dirty, low-budget Japanese meta-comedy-horror lives up to its ambitions and delivers a bounty of surprises - on VoD, DVD and BD on Friday, January 28th

Start your new year off right by seeking out this joyful, genuinely independent film from Japanese newcomer Shinichirou Ueda. This project, which came together though a workshop at Tokyo Film school Enbu Seminar, might be one of the great films about filmmaking, shining a light on just what keeps us watching horror films even when we’ve seen it all before.

When One Cut of the Dead begins its ambitious first shot, a 40-minute zombie movie that plays out in a single take, a low-budget film crew are desperately trying to get through a shoot that’s already approaching Hearts of Darkness: A Filmmaker’s Apocalypse (Eleanor Coppola, George Hickenooper, 1991) insanity. As his actors mess up a 47th take, the abusive director Higurashi (Takayuki Hamatsu) loses his mind at the cast, slapping one and storming off set. “He seems better than usual,” someone comments. Utter cabin fever has already sunk in, and within minutes we learn that the set is an abandoned WWII experimentation camp. This is some disaster artist act, and when the zombies attack, Higurashi can’t believe his luck, ‘this is reality! We keep rolling!’ At one point he even becomes aware of the camera trained on him by Ueda, and encourages him too to film. Soon he’s setting zombies on his cast in order to get the best footage. 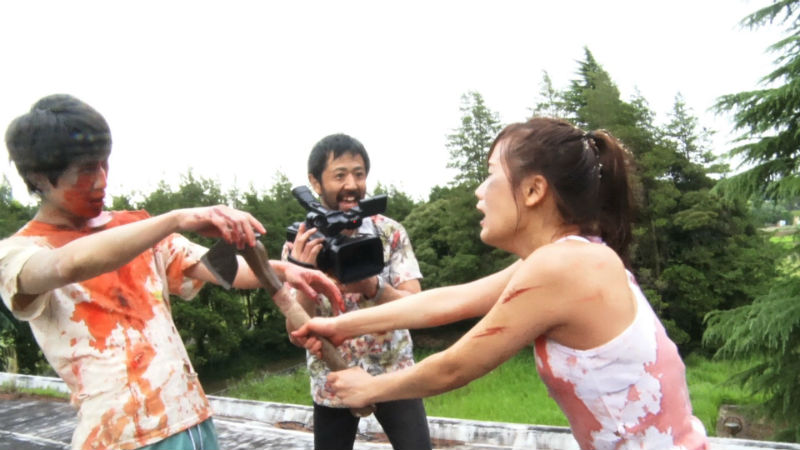 It’s amateurish, but delivered with a sense of play that suggests a movie very much in control of its creativity. Ueda squeezes the best out of his limited budget and location. When the production can’t handle the effects it lingers on a character reaction sometimes for two or three times as long as seems necessary. At one point the crew finds a dismembered hand which they mistake for a prop, and then play piggy in the middle with when the dismembered zombie comes looking. It’s such a slapstick moment that the filmmakers must be aware that it kills the tension, right?

Ueda withholds what he’s really up to as One Cut of the Dead goes through all the Zombie movie beats, from “I heard this place is haunted” to someone hiding their bite, to the crew turning on each other, but at such a pace that you can’t get bored. It’s so breathless that there is little time for character development. As a result, characters that are more like figures, running around the set. The camera gets dropped on the floor at one point, and of course there’s blood splattering on the lens, which we see the cameraman wiping off in another move that makes one question the film’s real viewpoint. It’s full of gestural blocking, the actors rushing to hit their marks. But that gives it a freshness, winking to the viewer of the entire rube goldberg machine that is filmmaking. 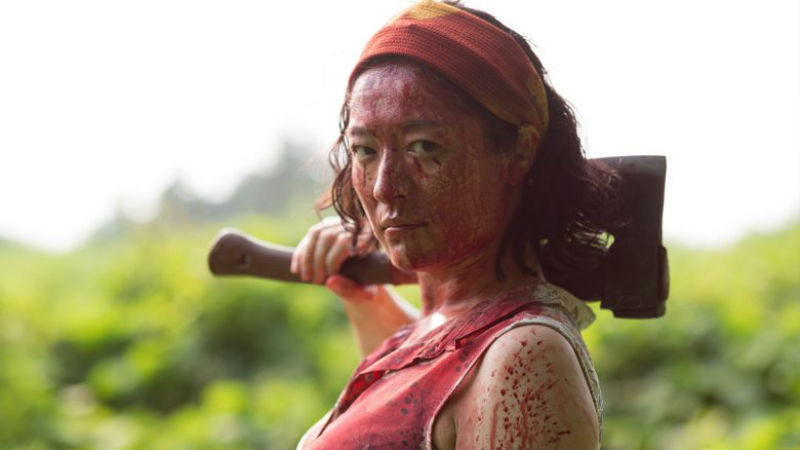 In one ingenious scene, the film’s lead, Chinatsu (Yuzuki Akiyama) nurses a zombie bite, which the audience can tell is a rather crudely applied make up effect. But after a moment she realises that it’s makeup from the film she was shooting and she peels it off of her leg. Simple moments play with our understanding of the various ‘films’ that are layered upon each other. Ueda is interested in the edges of films, the seems of artifice. Then halfway though, something even more meta- takes place , which is best un-spoiled but uses an inverse Cannibal Holocaust (Ruggero Deodato, 1980) structure to broaden the film’s universe and brings genuine depth to the characters and points out its tropes in direct ways.

When we return in the second half to those amateur moments, like those overdrawn close ups, the hokey effects, the fourth-wall-breaking gestures, Ueda brings a whole new set of contexts and revelations which transform our entire experience with the film. One Cut of the Dead does so much to highlight the methods of its construction that its third act is brimming with corniness: a selection of contrived narratives and conflicts to illustrate its jokes about filmmaking, have already been lampshaded. It allows the movie to get away with pretty much whatever it wants. Such ingenuity shifts the meaning of the movie from horror-comedy into an inspirational ode to filmmaking and the film community. Call it Through the Olive Trees (Abbas Kiarostami, 1996) directed by Drew Goddard, this generous, effervescent film will delight horror nerds, serious cinephiles, and casual viewers alike.

One Cut of the Dead is out in selected cinemas across the UK on Friday, January 4th. It’s out on VoD, DVD and BD on Monday, January 28th.

The last one to die... American thriller/horror directed by Japanese filmmaker resorts to recognisable devices of the genre, effectively creating an emotional bond between viewers and the hapless victims of a sadistic sniper - out now on Shudder [Read More...]