"Greasy movie"
Progressive American Supreme Court Justice Ruth Bader Ginsburg is celebrated for her mammoth achievements and treated as a celebrity, but should we bestow such treatment upon judges? Our editor reviews and raises questions about doc out in cinemas and also on VoD

Her speech is soft and tender, a little nasalised and highly avuncular – the perfect voice to read a night story to a child. The woman behind the voice, however, is very different. She’s firm and stern, her nerves and her body made of steel. And it’s not night stories and fairy tales that you will hear coming out of her mouth, but instead some of the most decisive and iconic court sentences in the history of the US.

Ruth Bader Ginsburg was born in 1933, and she is an Associate Justice of the Supreme Court of the US. She was the second female in history to be confirmed to the court. President Bill Clinton appointed her in 1993 – he became star-struck after a very short conversation. Her achievements, however, began much earlier. RBG investigates Ruth Bader Ginsburg’s entire life, from cradle to present (Ginsburg is still very active at the age of 85). 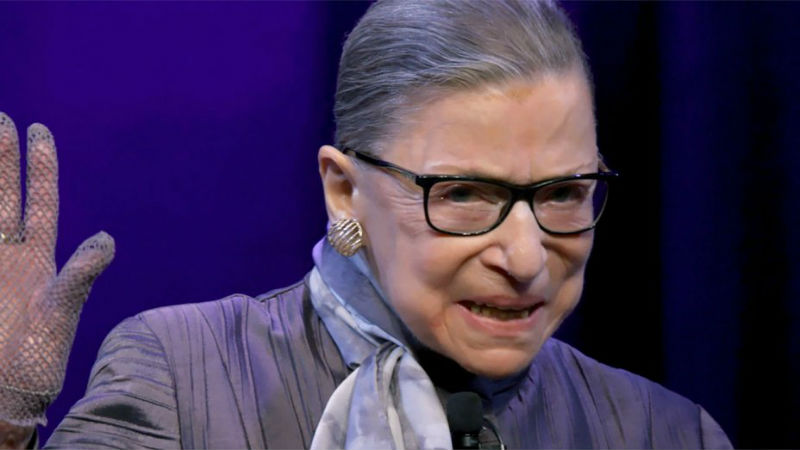 In her early 20s, Ginsburg had to juggle her Law studies at Harvard, her two-year-old daughter and also her ailing husband Martin D. Ginsburg, who suffered from testicular cancer. She only slept two to three hours a day, we learn. Harvard registered a single-digit number of females amongst its 500 students, and Ginsburg was one of them. There was an enormous amount of pressure on these females, whose behaviour was expected no less than sterling. Ginsburg succeeded. Not only she graduated and became a successful lawyer, but also her husband made a full recovery. She often credits Martin’s positive attitude towards her career as instrumental in her achievements. The husband was more than happy to share the housework and to watch Ruth shine on her own merits. He joked: “she’s not allowed into the kitchen”.

Ginsburg focused on the equality agenda early in her career and long before she became a judge, in the 1970s. She argued and won the Frontiero vs Richardson case, which challenged a statute preventing females from claiming housing allowance. Perhaps more significantly, she argued and won the Weinberger vs Wiesenfeld case, where she represented a widower denied survivor benefits under Social Security. By arguing in favour of a male client she demonstrated that the equality agenda was fundamental to people of both sexes, not just to females.

After becoming an Associate Justice, Ginsburg continued to focus on the equality agenda. Yet she was not perceived to be a radical judge, but to sit roughly in the middle of the ideological spectrum instead. As the Bush years kicked in, however, Ginsburg quickly shifted to the left and is now firmly established as one of the most powerful progressive voices of the US. Perhaps unsurprisingly, the documentary opens with Republican voices (Bush, Trump, etc) using very strong and misogynistic terms to describe her: “witch”, “evil-doer” and “vile” amongst those.

There is no doubt that Ginsburg is an exceptional human being, and also a very affable one. Her large teeth and broad smile are contrasted against large and yet timid eyes hiding behind gigantic spectacles. Her backbone is stern, her posture erect, her head tilting slightly forward as if giving into the weight of her glasses. She blends rigidness with femininity in the right dose. She’s quietly formidable. Someone you’d love to have a drink with and also trust to make the right decision under the most extreme circumstances. Yet there’s something that makes me very uncomfortable about Ginsburg, and also about this documentary per se. 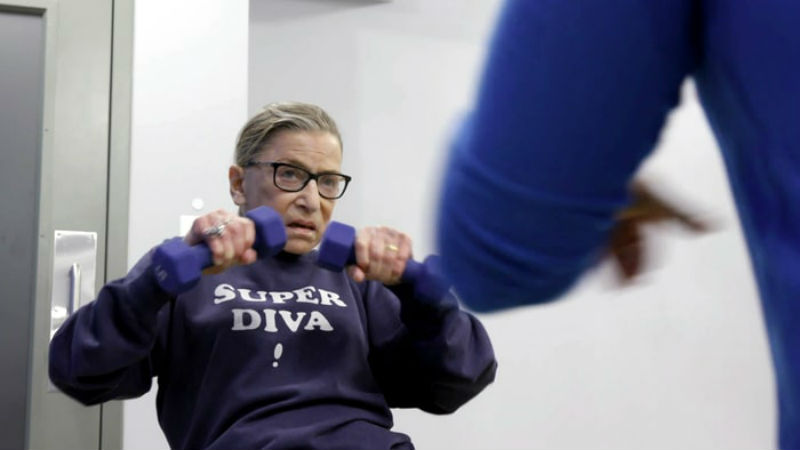 Despite (or perhaps precisely because of) her charisma, Ruth Bader Ginsburg should step away from the spotlight. The making of RBG is in itself a sheer perversion of justice, or contempt of court. Judges should remain discreet and solemn, particularly if they are still active. Such demeanour would never be permitted in the UK. Justice Denis Henry is probably the closest we ever got to a celebrity judge on this side of the pond, but the treatment that he received was nothing comparable to Ruth Bader Ginsburg. Ginsburg has been nicknamed The Notorious RBG, and become a regular television appearance. Her image is printed on shirts and mugs, a little bit à la Che Guevara. She has become a diva, a celebrity and a cult personality.

We might applaud such perversion of justice when the judge sits on our end of the political spectrum (such is the case with Ruth Bader Ginsburg, which whom I share many beliefs). However, we should be more cautious. The idolisation of individual judges could have disastrous consequences. I come from a Brazil, home to a judge called Sergio Moro. Similarly to Ruth Bader Ginsburg, judge Moro is treated like a hero, like a celebrity. Unlike Ginsburg, however, judge Moro is a fascist. He’s personally responsible for an extensive lawfare campaign that culminated in a coup d’état, the political imprisonment of Lula and the sheer destruction of Brazilian democracy. None of this would have happened had he remained solemn and discreet, like a judge should.

If you wish to idolise and celebrate an active judge, why not make a fiction film instead?

RBG is out in cinemas across the UK on Friday, January 4th, and then on VoD on Monday, January 7th.

Emma Thompson is a prominent high court judge grappling with a case that returns to haunt her, in court drama based on novel by Ian McEwan - now available on VoD [Read More...]

Lebanese film about child who has committed a horrific crime and blames his parents for procreating deals with a vast array of socio-political issues - in cinemas Friday, February 22nd. [Read More...]