"Greasy movie"
American exploitation movie offers dystopian view of the most powerful country in the world, while also timely echoing Trump's rhetoric of violence and attacks on the press - now also available on Netflix

Exploitation cinema on some level is the difference between the acoustic and electric guitar; synthesised and non-synthesised sound. From its past to its present, the rebellious and provocative spirit of the exploitationer is merely faux in its contemporary age, once defined by an attitude that ran through the Nouvelle Vague and the New American Cinema. The exploitation works that make an impression, such as Sam Levinson’s Assassination Nation are forming a second age of films, equally valid, yet like the changing tones of filmmakers, David Cronenberg’s movement away from body-horror a fitting example, time brings with it an evolution that distances our now to back then.

In Assassination Nation, High school senior Lily (Odessa Young) and her group of friends live in a social media haze. When an anonymous hacker starts posting details from the private lives of everyone in their small town, events spiral out of control. As Lily and her friends become victims of the mass hysteria, they are faced with the terrifying reality of not surviving the night.

Not an easy film to connect with, the characters are capable of grating against one’s feelings in the early going, which can be heightened by a feeling that it is just idly gazing on the characters and their small town; a film without a voice. Yet by the film’s conclusion, that missing connection is discovered. In cinema sympathy can be reduced to function on a basic juxtaposition of extremes – protagonist and antagonist. This is a core part of the storytelling language, and one that underpins our relationship with these characters, or rather our seduction. 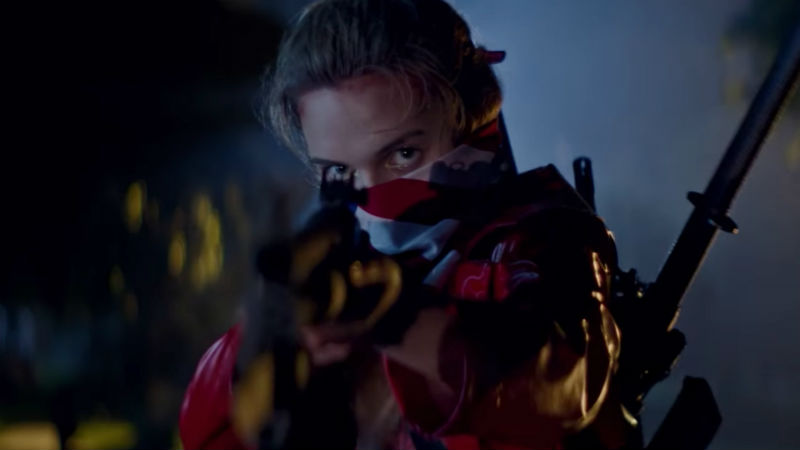 Experiencing or witnessing their plight as they are hunted down by the righteous and murderous mob, the simplicity of our empathic projection is exploited. And in spite of a connection forming, there still oddly feels a distance, yet a bond has formed that perhaps was more instinctive than conscious. It speaks to the manipulative nature of the storytelling language, and the lack of not free will, but conscious choice.

The film opens with a voiceover narration that lets us know that the characters are going to find themselves encountering a hell of a night, in a roundabout way. It’s not about what will happen, rather it’s about how it happens. And with an attitude fitting to exploitation cinema, we are forewarned that the story will feature content of a sexual nature, toxic masculinity, homophobia, transphobia, guns, racism, the male gaze, sexism, torture and fragile male egos.

I’d like to raise a couple of questions. Without a commentary or deeper intent conveyed by a voice, could Levinson’s storytelling be an exploitative act, or a fulfilment of our desire to be exploited emotionally as spectators? Yet should the filmmaker have to assert his or her opinion, or is the gazing upon such chaos without asserting a commentary embracing cinema as a stimulus to provoke thought in the audience? If so, then this of course relies upon the filmmakers trust in the collaborative and intellectual engagement they share with the audience. If cinema is about creating connections, not just those with the characters, but an engagement with our society through ideas, then exploitation cinema is a visceral and provocative language in and of itself. 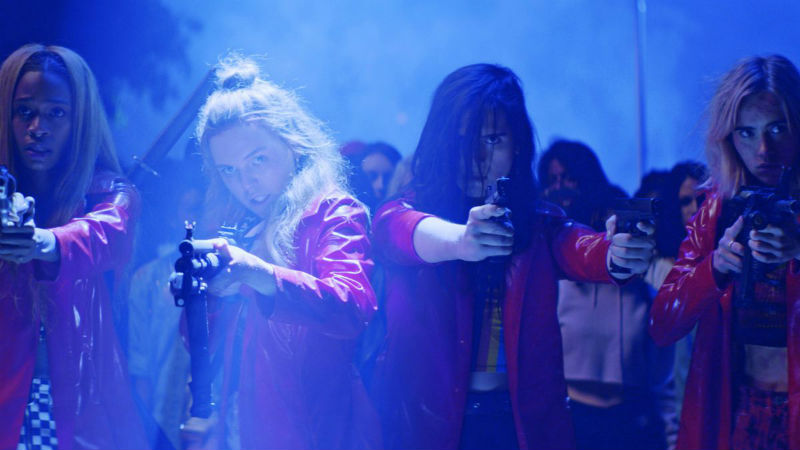 Thinking back on Assassination Nation, even in the immediacy of the experience, recalled is the plight of the characters of course. Yet what remains vivid are ideas, for example Lily’s challenge to her parents of whether we project sexuality onto nudity along with her monologue about the hypocrisy of righteousness, and of female empowerment. Not dissimilarly to Lars Von Trier’s Nymphomaniac and the conversations between Charlotte Gainsbourg and Stellan Skarsgård, the less provocative aspects of the film remain a vivid memory that shows a subversive side to exploitation or provocative cinema that leans towards thought over emotion.

Levinson’s reimagining of the Salem Witch Trials taps into the cyclic nature of human existence, echoing our hyperbolic impulsivity that is driven by fear. Assassination Nation on that note makes no intellectual point, rather it shows or chronicles as art is perhaps intended to the social consciousness of its time. While the Witch Trials were about the fear of the witch as ‘Other’, in the filmmakers reimagining the contemporary anxiety of pedophilia surfaces, amidst the anti-social nature of social media and technology’s potency in disseminating personal information, that becomes toxic to the individual and society. The film is an observation of chaos and while one character mocks those who still believe in privacy, it is difficult to not perceive it as being an advocate for privacy in a world of moral imperfection, amidst the susceptibility of mass hysteria versus rational and tempered responses.

Assassination Nation is a nightmarish dystopian vision, a heightened tale, and yet with the political divides forming within the U.S, Levinson’s vision is a timely one that echoes the violence of Trump, and his attacks on the press that are vital to a healthy democracy.