"Greasy movie"
Angry without a cause? Teacher has to grapple with student's "white anxiety" and latent nationalism, as she attempts to help younger people to integrate into the world of work - French drama in cinemas Friday, November 16th

Depicting a group of teens who are forced via an integration course to learn the basics of crime novel writing, The Workshop is a slow burn work of metafiction that doubles up as a study in white anxiety. It could also be described as a “sunshine noir” that wears its themes on its sleeve, processing its central ideas through the literal prism of a writer’s workshop. While entertaining for its intellectualism, it cannot maintain its menacing tone, leading to an unsatisfying conclusion.

The film is set in La Ciotat, a town near Marseille that was once famous for its shipping industry. After the docks closed down, the town became divided between the poor residents just trying to get by and the rich people visiting on their yachts. Visiting novelist Olivia Dejazet (Marina Foïs) teaches the local teenagers the building blocks of novel writing in order to help them to enter the world of work. During her workshops, she is struck by one teenager, the obnoxious Antoine (Matthieu Lucci), who bristles against his classmates and seems to be harbouring white nationalistic ideals. 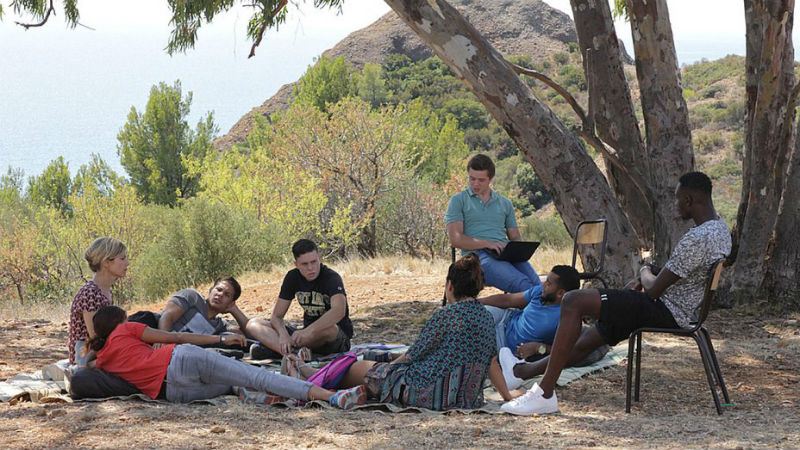 There’s little sense that he has an interior life beyond just a general feeling of alienation. We often see him at home, either playing video games or watching YouTube videos of white nationalists ranting about protecting “indigenous” French culture. He freaks out the rest of the class by reciting a passage depicting a mass murderer mowing down a group of yacht owners. We are told by Olivia, who notes the technical skill of Antoine’s passage, that depicting racist acts in a novel is not the same as endorsement, a view the film evidently holds. It wants to examine a racist character without making explicit judgements.

It’s a common trope to use the classroom as a means to explore ideals of nationhood and solidarity. Director Laurent Cantet did it already himself with the Palme d’Or winner The Class (2008). His ear for the way teenagers speak and express themselves – balancing eloquence and insight with profanity and bemusement – is spot on. Group conversations run on longer than one would expect, the teenage actors playing themselves with ease. It’s only a shame that Antoine is often far less interesting than his counterparts. If Cantet’s aim was to show just how dull racism can be, he succeeded, but it doesn’t exactly make for great entertainment. It can be done correctly, such as with the German drama The Wave (Dennis Gansel, 2008), but the command of tone is too loose, aiming for a conversational vibe instead of a truly piercing exploration.

Antoine doesn’t see his preoccupations as political and cannot understand why others are disturbed by his fantasies of violence. As a white male, he doesn’t have to. His privilege and anxiety means that everything can be about him. Antoine refuses to acknowledge the complexity of post-industrial France.

Antoine’s Arab classmate Malika (Warda Rammach) wants the book to be set in the past, as her Tunisian grandfather helped unionise and strike for better wages on the docks. It’s a great point of pride for her family, who once had honest jobs right on their doorstop. But the solidarity of the worker against capitalist greed is lost on Antoine, who would rather see things in terms of nationhood, racial purity and general white anxiety. Still, Olivia takes an interest in the young man, leading to a classic meeting of the minds; teacherly concern versus blind hatred.

The way it initially develops is reminiscent of the thrillers of Claude Chabrol, in which homicidal tendencies often lurked behind a thin veneer of respectability. But where Chabrol’s films were still thrillers in the end, Laurent Cantet’s subverts the standard conventions of the ‘cosy’ thriller for a more literary exploration of the state of the nation. While there is some interest in whether Antoine’s posturing will turn into legitimate violence – a bit like this year’s Burning (Lee Chang-dong) – he is too un-engaging a character to make his threats seem, well, threatening.

So, having set up an intriguing sense of time and place, with a great setting and a neat metafictional bent, Cantet’s film falters in its final execution, opting for a lethargic tone just when it should be ramping up the tension. Perhaps he should give it to those teens – they’ll know what to do with it. Just keep the story away from Antoine.

The Workshop is out in cinemas across the UK on Friday, November 16th.

Just child's play? Substitute teacher suspect's there's something Machiavellian about his students, and that they may have been involved in his predecessor's suicide - from the BFI London Film Festival [Read More...]