"Dirty gem"
Mike Leigh's historical epic is a superb register of a grassroots movement and massacre hardly heard of outside Britain, in a country that never saw a large revolution - available on VoD

Mike Leigh has chosen the form of chronological historical narrative for his latest film. As I write this, I am wracking my brains to name a historical drama with it’s primary subject rooted in working class history. Representation of workers on film in any century prior to the twentieth are usually given in cozy form as good honest (or feckless) folk who know their place in the social order. Adaptions of Dickens or Hardy novels on film are perhaps the closest we get to portrayals of the ordinary citizen, but even these have a tendency to stray into either bathos or comedy relief. That’s why a major British film about a hugely significant event in workers history is both welcome and necessary.

Leigh has taken pains to tell this story in great detail and this makes for a long film at nearly two hours. The time taken to place the events of 16th August 1819 in a political and historical context pays off. We understand the hierarchy of 19th century Britain: the painstaking lengths that politicians and law enforcers go to maintain the stats quo has hardly changed. These efforts are fuelled by the twin paranoias of the French and American revolutions where the people did indeed overthrow their governors. Despite the sacrifice made by the common soldier in the recent Napoleonic Wars, here personified by Jospeh (David Moorst) returning home to his family, it is the leaders who are rewarded financially by parliament. The common people are left starving after the passing of the corn laws led to a ban on cheap imported grain. 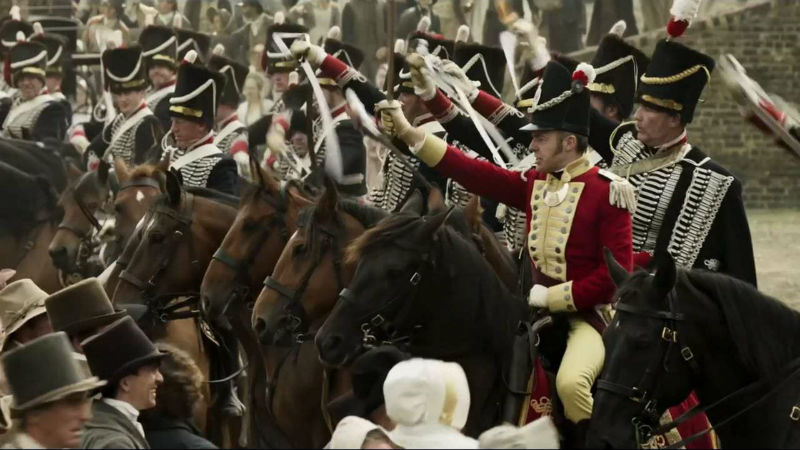 Unfairness is meted out at every turn to a community of mill workers that is warmly represented by Leigh. Wages are reduced, work is lost due to mechanisation, beautifully realised in song by the Singing Weaver (Dorothy Atkinson), cramped living conditions, harsh statutes and punishment for minor misdemeanours. Top of this list, (as it affects all the others), is lack of representation. Large urban areas grouped together with one distant MP and no vote for the working people to determine who governs them.

We witness the lead up to the massacre and the massacre itself through the eyes of Nellie (Maxine Peake) Joshua (Pearce Quigley) and their family, the agitators and reformers and the area’s magistrates and constable.

The preparations for the march by reformers Joseph Johnson (Tim Gill), Samuel Bamford (Neil Bell), Mary Files (Rachel Finnegan), John Knight (Philip Jackson), John Thacker Saxton (John-Paul Hurley) and Richard Carlile (Joseph Kloska) are shown in a mixture of public and private meetings. Arguments for reform are place carefully in passionate dialogue and speeches, leaving the viewer a clear picture of what was at stake.

This period saw the establishment of the Manchester Female Reform Society and Leigh places this group of women front and centre of the action.

Excitement mixed with discord characterises Nellie’s family’s approach to the upcoming rally. The men excitedly report information gleaned at meetings and Nellie questions how this event will change anything. At times, this dialogue is a little clunky even in the mouth of an actress as skilled as Peake, but this can be forgiven in light of the directors mission to have his audience understand their history. Magistrates, MP’s Royalty and the military collude with spies in order to build a coalition in order to combat the “enemy”, of a section of the populace planning a riot. A superbly revolting Prince Regent (Tim McInnery) proclaims to his government ministers “I know what the people want better than they know themselves”. The common people are infantilised and oppressed by a system that sees them merely as cannon or factory fodder. 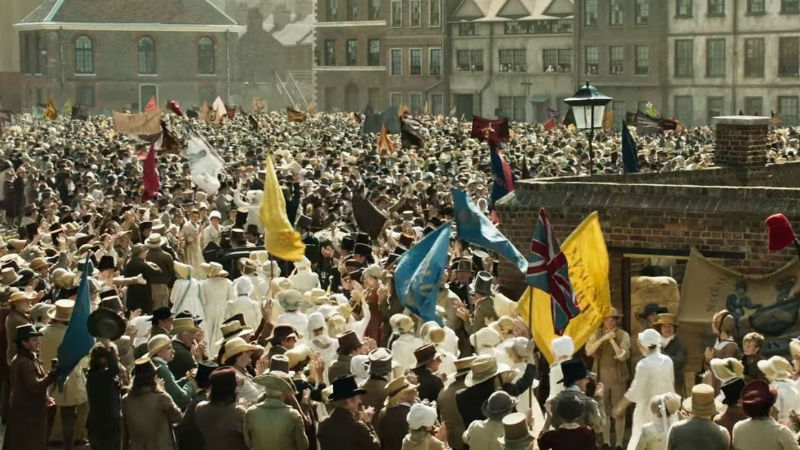 The anticipation for an opportunity to affect change is mournfully and elegantly shot by Dick Pope as workers march on Saddleworth Moor, practise instruments and prepare to bring their whole families on this ‘day out’. What began in their minds as a peaceful protest and demand for equality of opportunity turns into a nightmare skilfully edited by Jon Gregory to reveal Leigh’s intention of personalising an impersonal sabre charge at an innocent group of unarmed people. There are a number of shots of sabres begin wielded from horseback towards a single figure. This is resonant of the famous 1984/85 miners strike photograph of Lesley Bolton about to be struck by a police baton. We are reminded in the simplicity of focus, capturing punching, swiping and beating bystanders to the ground, of other confrontations where the government has used the army or law enforcement officers as an instrument of the state.

Indeed, these events are inescapably pertinent to the current state of the nation, disenfranchisement of large parts of the north of the UK, a disaffection with governance and the seeming march backwards to the divisions and inequalities of the 19th century. This is history firmly reminding us of what went before to illuminate where we are now. A call to arms, a disenfranchisement rousing roar of a film that deserves our full attention.

Peterloo is out in cinema across the UK on Friday, November 2nd. Available on VoD in March,

French director returns to the topic of labour rights, and how globalisation is crushing blue collar workers in France, in another electric documentary-like fiction starring Vincent Lindon - streaming now with DMovies [Read More...]