Teenager Gideonette de la Rey (Anchen du Plessis) doesn’t like her name. In fact, our protagonist is convinced her unusual moniker carries a curse. Her father, the pastor of a small church, he assures her there’s no such curse. But then one day he’s found dead in the church building.

Gideonette is obsessed with the curse and begins writing a list of ways it might cause her to die. Her alcoholic mother (Hanlé Barnard) finds out and forbids her from looking at the list. 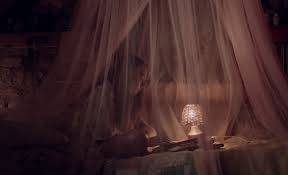 When her mother checks herself into a hospital “for some rest”, Nettie, as she prefers to be called, moves in with her grandparents Willem (Pierre van Pletzen) and Koekie (Rika Sennett) whose farmhouse is surrounded by countryside where she meets a younger boy Bhubesi (Themba Ntuli), a mute, who with the help of her grandfather is building a giant spaceship in the shape of a meerkat so that he can blast off into the stars…

The above probably sounds completely bonkers. But it’s really hard to do this film justice simply by talking about its plot. So much else is going on, not least the exquisite cinematography which lend many of Nettie’s scenes, some of them walking through vegetation in sunlight, an ethereal dreamlike quality.

This is a film about coming to terms with your past and letting go of fear in order to move forward. And then there’s the fact that this is a South African movie set in a loosely defined time presumably while the country was still under Apartheid, in which this writer, for one, kept wondering where all the black people were. 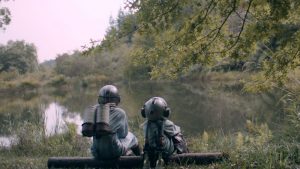 Well, the mute Bhubesi is black, as his briefly seen mum, and while the white Nettie’s relationship with him is quite odd, it doesn’t seem to be so much about race as about friendship for someone who needs a helping hand. Which both these characters do in their differing ways.

For the finale, all the hitherto hidden black people finally appear alongside the white Nettie and her grandparents with a feeling of different colour skinned people getting along together and moving forward. And of Nettie finding herself in this new context. A wonderfully and thoroughly subversive little film which deserves to be widely seen.

Meerkat Moonship played in the Schlingel International Film Festival where it deservedly picked up the Fipresci jury prize.

What's under the hood? A teenage girl training for a show jumping competition wears a hoodie to keep her head covered and gets bullied at school  – from the Schlingel International Film Festival [Read More...]