"Filthy genius movie"
What's under the hood? A teenage girl training for a show jumping competition wears a hoodie to keep her head covered and gets bullied at school  – from the Schlingel International Film Festival

Although her father was killed in a riding accident, Edhel (Gaia Forte) is training hard for an upcoming show jumping competition. Tensions are frayed at home where her mother (Roberta Mattei) constantly tells her off for wearing her hoodie over her head round the house. School is even worse. She won’t take the hood down and expose her head for anyone – and her classmates hate her for it.

Things change with the arrival of a new boy in the classroom who is far more friendly towards her. Around him she starts to come out of her shell. This is an amazing, really thoughtful film about people who are different. It has a lot to say about not only bullying and the cruelty of children towards their peers but also what goes on inside the head of the person being bullied. 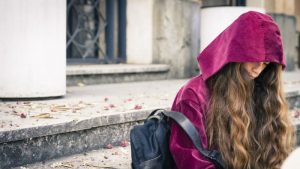 Its narrative walks a very clever tightrope between its heroine having a physical deformity beneath the hood in the form of distinctive, pointy ears and the fairly preposterous idea that she might in fact be an elf. There are connections you can make to support the idea, but the style of shooting never goes beyond suggesting the possibility.

Silvano, a caretaker at the school who is also a sword and sorcery fantasy obsessive given to hanging out at the local comics store, is certainly convinced and becomes concerned for her. He thinks she needs to return to “her people”. His obsession gets him into trouble with his employers. And when Edhel vanishes for part of the final reel, it’s very tempting to agree with Silvano. But perhaps there’s another explanation. 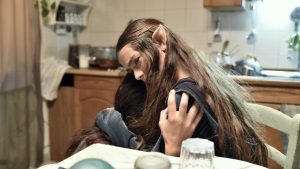 However, the trailer boasts no such subtlety and screams at us, she’s an elf, she’s an elf, she’s an elf! No possible room for doubt, no ambiguity and – to all intents and purposes, not the film I saw. It’s a terrible trailer because it completely misrepresents the feel of the film and what it’s actually about. Although we’ve published it below, you’re better off watching the opening five minutes instead which provides a much clearer idea of the film (the clip is below the trailer – no subtitles, it’s in the original Italian, but you’l get the idea).

If you want to see how to promote a film like this, look no further than Border (Ali Agasse, 2018). That has some pretty clever surprises hidden in the twists and turns of its narrative (although no one in that film is an elf, in case you were wondering), but the clever trailer understands the game the film is playing and gives away nothing it shouldn’t. It’s a shame whoever did the trailer for Border couldn’t do the one for Edhel too. Both are subtle films which need the correct marketing to succeed and are likely to fail in cinemas without it.

Edhel played in the Schlingel International Film Festival. Watch the uninspiring subtitled trailer for the film below – or below that, watch the first five minutes instead for a more accurate idea of the film (in Italian without subtitles, sorry):

Privacy in the age of internet exposure. An act of animal cruelty on a video goes viral with terrible, unforeseen consequences – from the Schlingel International Film Festival [Read More...]

Teen fantasy drama based on a real-life event is moving enough, but it also overdoes the ethereal tropes, and the outcome is sometimes a little contrived - in cinemas Friday, August 3rd, and on VoD the following Monday, August 6th [Read More...]