They Shall Not Grow Old

"Filthy genius movie"
The horrors of war, in yet another dimension: British archive footage from The Great War converted into 3D accompanied by extracts of the accounts of British and Empire soldiers who fought there – from the 62nd BFI London Film Festival and in cinemas on Friday, November 9th

While you’re wondering about why Peter Jackson’s assemblage of Great War archive footage put together in collaboration with London’s Imperial War Museum should be in 3D, he opens his film with a tiny, mid-screen window-boxed image of soldiers marching to war. The greyish white piece of archive footage is in 3D and we are – to use a well-worn phrase – looking through a window on the world.

The window grows larger, filling first the Academy (4:3) frame and then the full wide-screen image. At various points in its running length the film switches back to Academy, but unusually for me, I found the experience so engrossing that i didn’t notice the change until after it had happened.

As for the 3D conversion, it definitely adds something on the level of involving you in the footage: this is one to see with the glasses as a 2D version wouldn’t gave the same impact. 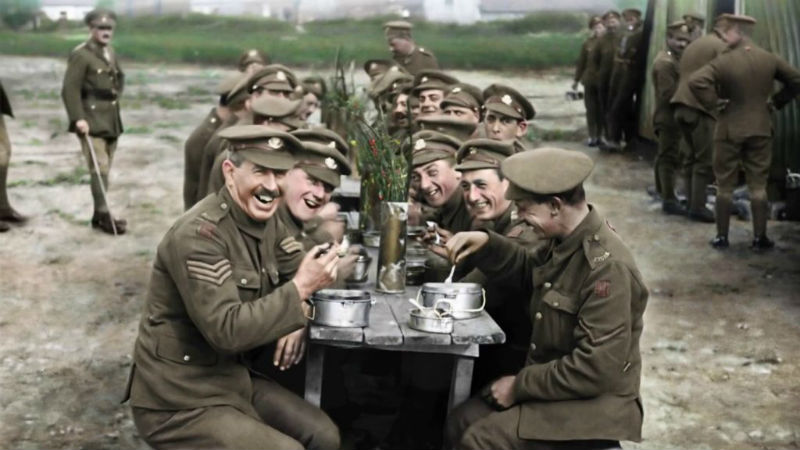 Jackson starts off his soundtrack with nothing but readings from extracts of testimonies from those who attended WW1 as soldiers. So just black and white archive images and spoken word on the soundtrack nothing else.

The testimony snippets cover a whole range of subjects – what people were doing when war was declared (playing football with a German on the team and deciding not to call him The Enemy ’til tomorrow), younger boys lying that they were 19, army boots which came in sizes that didn’t fit but could be softened up by urinating in them, marching round the town and scamming hapless locals to join up. It’s compelling, but you wonder how long word, footage and nothing else can sustain a film.

Then we get to the Front and the fighting and Jackson plunges us into the full horror of war by colourising the 3D footage to make it feel that much more real and adding in all sorts if sound effects – shells flying, bombs exploding and so on. I’ve seen countless war or violent action films over the years, but very little as harrowing as this.

(Quick aside: the one film that was actually more harrowing still was another Imperial War Museum production, their restoration of the British propaganda film German Concentration Camps Factual Survey (Alfred Hitchcock, Sidney Bernstein, Baron Bernstein, 2014), intended to show the Germans how they’d been exterminating the Jews in the death camps, complete with footage by the first Allied cameramen who went in there not knowing what they’d find.) 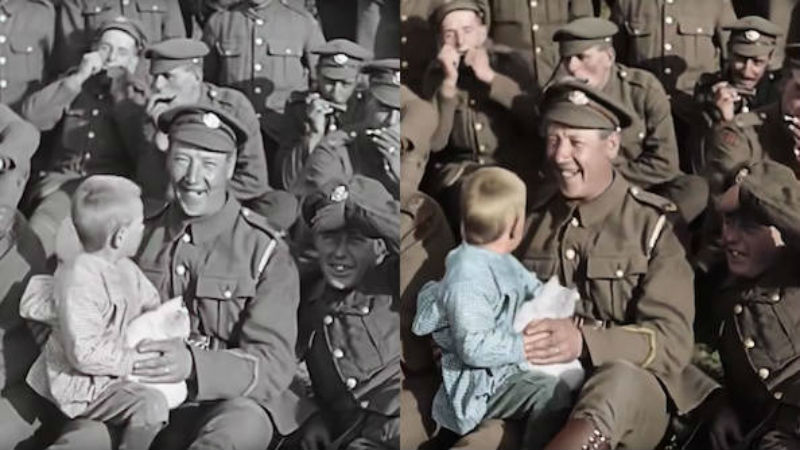 So, anyway, there are bombs blowing up. Men seriously injured or dead. And lots more battlefield footage. So horrible that you wonder, why do people do it. There’s a lot of this stuff and it feels relentless. There’s testimony on feet freezing inside boots, going gangrenous and requiring amputation. There’s testimony on all sorts of other tough material too.

It’s a difficult one to judge, but although it’s often (too?) hard going, They Shall Not Grow Old succeeds in communicating what it must have been like to be member of the British army during that particular conflict. Which is quite an achievement given that many if those who fought never discussed the experience with their loved ones but instead kept silent about it often taking their experiences to the grave with them.

This is very different from the three – no six – part Lord Of The Rings adaptation Jackson made. It’s good to report that it’s a highly impressive and sensitive exploration of a very difficult subject indeed. Something of a change of pace for this maverick New Zealander but definitely with catching up with. And if you can hold out through the end credits, Jackson runs a superb recording of the soldiers’ popular prostitution song ‘Mademoiselle from Armentieres Parlez-Vous’ over them.

They Shall Not Grow Old plays in the 62nd BFI London Film Festival, where this piece was originally written. It’s out in cinemas everywhere on Friday, November 9th.

The anti-war movie Journey's End joined forces with mental health charity Combat Stress in order to fight shell shock and PSTD; DMovies investigated the devastating impact that war can have on the lives of veterans, and found out the role of cinema in raising awareness and combating mental health disorders [Read More...]

The Anti-War Battalion is fired up!!!

The emblematic Czech anti-war novel The Good Soldier Schwejk is being turned into a movie, but this isn't your average period drama; film director Christine Edzard is throwing in some very modern flavours as well as a groundbreaking theatrical twist, all from her studios in Rotherhithe [Read More...]