"Dirty gem"
Switch around the numbers. Showman-cum-documentarian Moore turns his attention to Trump's ascendancy – from the 62nd BFI London Film Festival and now available on VoD

Michael Moore’s latest documentary starts with the US election which was a shoe in for Hillary Clinton, with the US polls predicting with 100% certainty that she would win. Except that the exit polls showed something different and, as we know, victory went to Trump. As Moore says, how the fuck did we get here?

Some of his argument is well-worn, familiar material. The Democrats overruled their grassroots, replacing popular, anti-neoliberal candidate Bernie Sanders with party elite favourite Clinton, disenfranchising many Democrat voters who, simply, didn’t see any reason to vote after that. This thesis has been recounted elsewhere, although the idea that the Democrats actually lied about Sanders’ winning voter numbers saying he’d lost perhaps hasn’t been touted so widely. 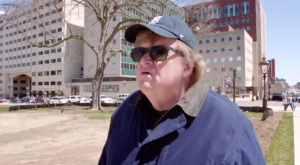 ext up, Trump’s campaign: not so much an attempt to win the presidency as to boost ratings and up his TV appearance payments – which backfired and got him sacked by the network. Faced with this situation, Trump was persuaded to attend the two rallies he’d organised and the campaign grew of its own momentum, unexpectedly demolishing first the other Republican candidates and secondly Clinton’s Democrat opposition. Both loser Clinton and winner Trump were taken aback.

But not Michael Moore. The director has previously had warned that he understood how people in places like his home town of Flint, Michigan think. And therefore how they vote. Indeed, the film’s most powerful segment tackles the pre-Trump scandal of Michigan’s governor’s Rick Snyder switching Flint’s clean water supply source from the crystal clear Lake Huron to the polluted River Flint simply because it’ll turn a higher profit. Never mind that it gives everyone irreversible lead poisoning.

But the kicker is yet to come. Moore isn’t kind to Obama either. He cites Obama’s record on drone strikes among other things. 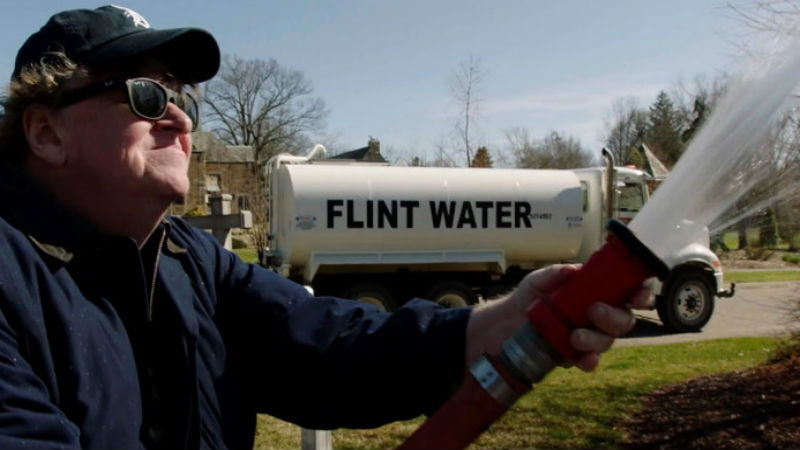 Anyway, the then President Obama visits Flint to sort out the crisis and drinks a glass of local water. In order to show it’s potable. When all the stats say it isn’t. And when I say drinks, I mean touches the water to his lips without actually consuming any of it. Yes, it’s a stitch up between elitist Republican governor and equally elitist Democrat president. One less reason to vote for either.

Overall, however, this is a partly fascinating Flint material and partly uninspired rehash of well rehearsed arguments about Trump that add nothing new to the debate. Which is a pity because Moore has made better films and I really wanted to see him on top form tackling Trump and everything for which Trump stands.

Fahrenheit 11/9 played in the London Film Festival, where this piece was originally written, and is also in cinemas from Friday, October 19th. It’s out on VoD on Friday, February 8th.

As the controversial American director hits the UK with his new movie 'Where to Invade Next'. Dirty Movies asks him some bombastic questions about the role of the US in the recent coup d'état in Brazil; he also talks about Corbyn and Brexit [Read More...]