"Dirty gem"
The whore, the madonna and the one-night stand. A rotoscoped drama in which three women in very different social situations struggle to survive the sexually repressive regime that is Tehran - now available on VoD

Here’s a thing. Packed with political, sexual and social subject matter, this is a live action film shot in Tehran. Only it’s neither live action nor shot in Tehran. The content rendered shooting on location pretty much impossible. The live action is actors shot against green screen with a view to building the location into the film later on. Then it’s treated by a process called rotoscoping which, despite having been around for the best part of a century, is not that well known outside of animation and movie special effects circles.

Rotoscoping is basically tracing images of e.g. actors off sequential single frames of film to retreat them as drawings in animation – think of the Lucy In The Sky With Diamonds sequence in Yellow Submarine (Geroge Dunning, 1968). It was invented and patented by legendary animator Max Fleischer for his Out Of the Inkwell trick film shorts (1918-27) featuring Koko the Clown. More recently, Richard Linklater employed a computer enhanced version of the technique on Waking Life (2001) and Philip K. Dick adaptation A Scanner Darkly (2006).

In Tehran Taboo, the locations are provided by a combination of drawn images and 3D elements which have been composited with the rotoscoped cast within the computer. Not only is the overall effect thoroughly convincing, the film has a hyperreal aesthetic which straight live action doesn’t. There’s a compelling, almost hypnotic quality to it. 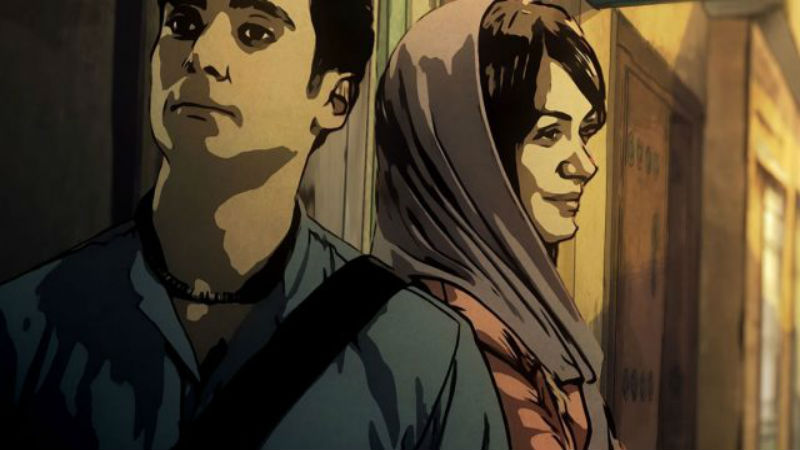 A snowbound, midwinter opening with a car kerb-crawling lines of prostitutes sets the scene. Life under fundamentalist Islamic rule seems to regard women as inferior citizens who must get their husband’s written permission to be allowed to do anything. No such bureaucratic checks exist for the men, although as suggested by the scene where a man is taken away by police from a park where he’s been holding hands with a woman, everyday life can be far from easy for them, too.

The three-handed plot concerns three women. Pari (Elmira Rafizadeh) is a prostitute doing her best to raise her young boy as a single mum. She dispenses sexual favours to an aging judge as a means of getting her son past an officious, low level female bureaucrat who is refusing him admission to the school in the area into which Pari and son have just moved.

The judge puts Pari up in a vacant flat he happens to own where she makes friends with respectable housewife and mum-to-be Sara (Zar Amir Ebrahimi) whose hardline husband is refusing to sign the form to allow his wife to work during her pregnancy. One evening, larking about with Sara and slightly drunk, Pari undertakes as a prank call to the building’s caretaker and suggest a rendezvous. She does this on Sara’s phone which will eventually have dire consequences for the latter.

Meanwhile, a third woman Donya (Negar Mona Alizadeh) visits an underground dance club where she has sex with a musician Babak (Arash Mirandi) in the men’s room. However, she’s due to get married very soon and needs to prove her virginity to her husband. This requires an expensive operation for which she insists Babak must pay. So he sets about finding out about either this operation or possible alternatives to it. 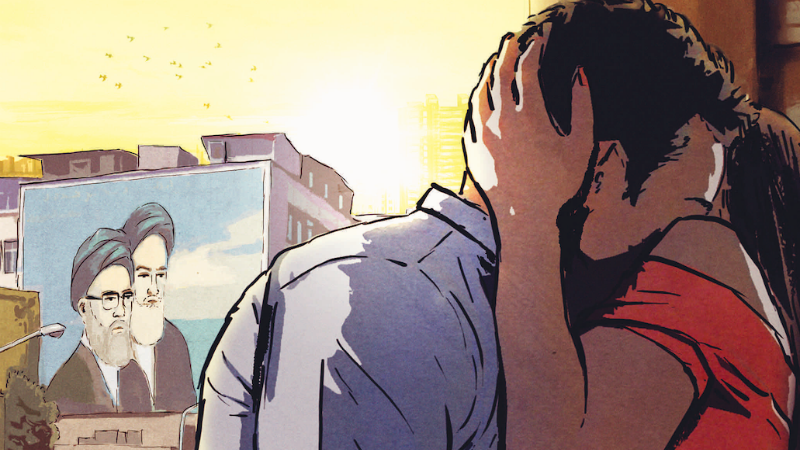 Like Pari’s son taking delight in dropping water bombs from his balcony onto unsuspecting innocents below, the men here mostly game the system and have everything their own way. The women, however, have a much harder time of it, wherever they fit (or don’t fit) in the social spectrum. Ironically for a system that purports to uphold sexual abstinence or monogamous relationship, the woman that fares best here is the worldly-wise prostitute while the respectable, faithful housewife who makes one accidental minor slip finds herself in an ever worsening, no win situation culminating in a devastating rooftop finale involving a phoenix costume and a camera held by Pari’s astonished son.

If the rotoscoping process adds anything, it ups the visual ante producing the movie equivalent to reading a graphic novel. But the film stands on the merit of its writing and strong performances from its highly effective cast. See it – and be reminded of the freedoms we in the West have that are all too easily taken for granted.