"Greasy movie"
WW2 drama about German soldier who impersonates a captain blends the beautiful with the monstrous and raises moral questions about our passivity as viewers - on VoD on Monday, October 1st

The sounds of laboured breathing disrupt the peaceful image of an empty field. From the opening of Robert Schwentke’s The Captain, we are introduced to a man facing desperate circumstances. We witness the film’s protagonist Willi Herold (Max Hubacher), pursued by his compatriots, the sound of a horn striking up the parallels of blood sport, the jeep and bullets in place of the horses and hounds. In this moment the contemplation of the violence man has brought upon God’s garden is evoked.

Set in the final two weeks of World War II, Herold, a young German soldier fleeing for his life comes across an abandoned vehicle on the roadside, inside of which is a Nazi captain’s uniform. Presented with this opportunity, our protagonist begins his impersonation of an officer that soon sees him take on a monstrous persona. It is a choice that brings him closer to those he is trying to flee, than an escape from his plight. 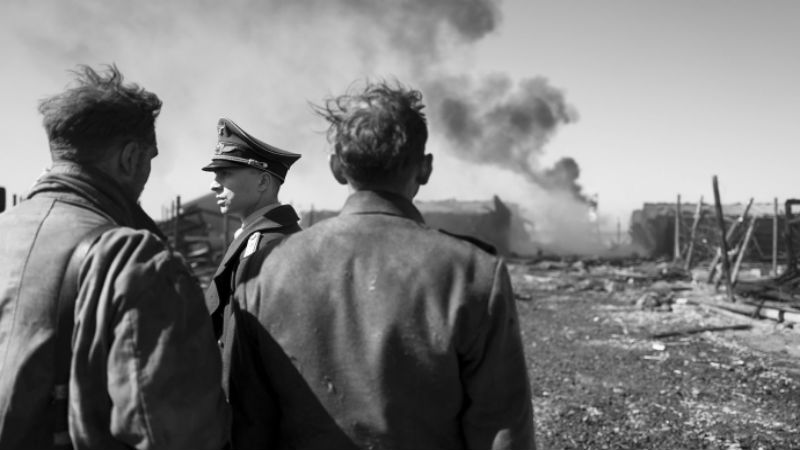 Schwentke uses the surrounding peril to immerse us in his character’s desperation, and even in the guise of a captain, the tension is ratcheted up. Glances and subtle gestures of other characters spark that feeling of dread that they have seen behind the impersonation, to that truth that bonds us to Herold. While our sympathy is almost immediately granted to this stranger trying to outrun death, in the shadow of war and who can conquer whose violence, the potency of this narrative is fittingly the conflict of an individual’s morality versus his survival instinct.

The Captain is a troubling film, owing to its moral vacuum in which the imperative for us to make moral judgements is not absent, but is significantly diminished. We see our projection of sympathy not reciprocated by Herold towards other deserters, his fear conquering any moral resolve he may possess. In all likelihood the director is critiquing the world the individual inhabits as an influential force, but the events in the film are of the inhumane selfishness and the drive of self-preservation. What is striking is the way in which perilous desperation evolves into entrapment. It is the act of keeping intact the legitimacy of his impersonation that therein prevents exposure, yet that inevitably requires the fear-riddled youth trying to outrun death to transform into the monstrous.

The troubling aspect of the drama is our passivity to his immoral choices that claims the lives of many, who come to represent the murder of the self – that fearful youth we first met. If we look back on the barbarous chapters of history, of war, and the casualty of innocence, then Herold is representative of the metaphorical versus the literal death. This echoes the belief of a pause in existence, in which a country, Germany for example under The Third Reich, ceased to exist. By its conclusion however, The Captain itself evolves to look at how we are authors of our own identity, Herold an example of rebirth or rather rediscovery of old selves as much as he is symbolic of a type of metaphorical death. 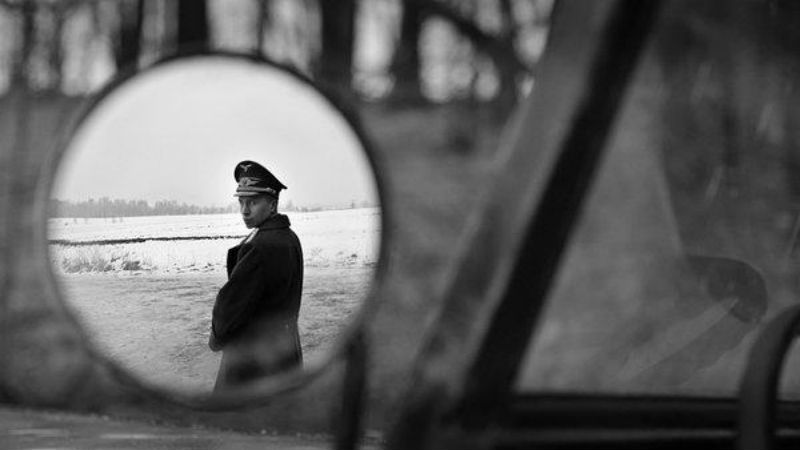 What the director has crafted is an example of that visceral juxtaposition of beauty and the monstrous. While its soul may be ugly, the monochrome image brings to the horror, the madness and the slaughter a crisp clean look that casts it with an aesthetic beauty. This appeal only compounds those troubling feelings of moral passivity, yet there is a skill in Schwentke’s pictorial orchestration. For example, the way Herold occupies the car, from first sitting in the backseat to standing recalls archival footage of Adolf Hitler. The car communicates the theme of the metaphorical death, contrasting so starkly to that first image of him in peril.

The term ugly is a misappropriation, rather what the drama depicts is the tragedy of one’s loss of humanity. By retaining a composition of striking beauty in its aesthetic execution, this creates a visceral friction with our moral conscience that is almost almost silenced. Of course, it is nigh impossible to wholly remove an audience’s moral inclinations as the heritage of storytelling has been structured around morality, going back to the ancient world. The fact that we do question the character’s choices, or rather our own moral passivity as a response, lends a disconcerting feeling of having lost touch with oneself.

The Captain is out in cinemas across the UK on Friday, September 21st. On VoD from Monday, October 1st.

With the British RAF being decimated in the Battle of Britain, its squadron of Polish fliers turn the tables on the Germans - in cinemas from Friday 7th September [Read More...]

2 thoughts on “The Captain (Der Hauptmann)”