"Dirty gem"
Novelist Chloe Aridjis is a wild and indomitable beast who will not surrender to these lame creatures called men, in dazzling doc blending a variety of media - now available on VoD

You are about to confront a strange beast, one that you want to follow down the dark city streets to see where it is going. Director Josh Appignanesi’s film makes a bold bid to shake us up, using a 1986 VHS camera that gives us an engaging and pleasantly dated viewing quality. We feel that we could be watching a ‘home video’ taken by a friend of the London-based Mexican novelist and writer Chloe Aridjis and yet clearly not. This film is a combination of form, part documentary, part gallery film and part thriller. We are never quite sure which film we are in and this is what keeps us watching.

The further we go into this film, the further we are lost inside this work of art, it feels as if we might be inside a painting. From the plastic packaging motif that runs throughout, to the close-ups of animals on canvas, the cat creatures mirroring the prominent cat character of the writer’s pet Ludwig, along with seeing the central figure of Chloe often from behind plastic or through glass. 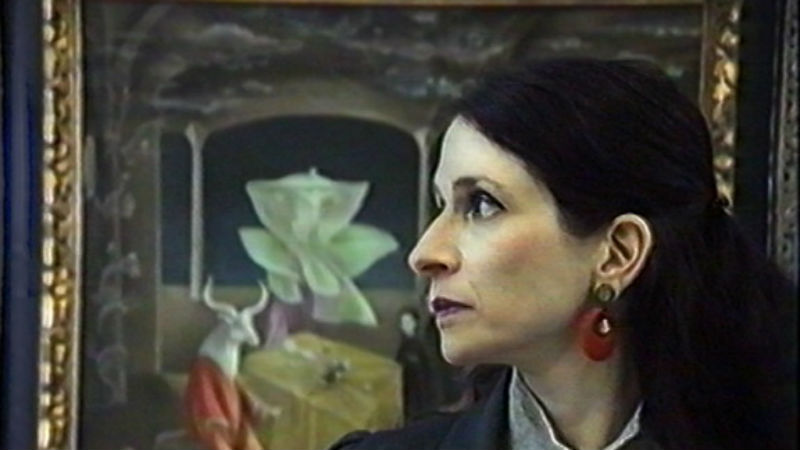 Our protagonist is in her own imaginary world of pushing her experience to the outer reaches of what is ‘safe’ and ‘normal’ and at the same time in a ‘man’s world’ and in a man’s ‘Art World’ where her interaction with men at private views and her interactions with her literary agent (Angus Wright) portray a place where her opinion is not ultimately valued and she is to be flattered and patronised.

Chloe’s own agency in her own story is stronger than these influences around her, she makes a deliberate choice to follow the odd ‘Marcel Marceau’ like character of the man in the gallery (Marc Hosemann) who appears randomly throughout the narrative, in spite of being warned of danger by her friends and a rather jarring police detective (Patrick O’Kane). The man leads Chloe in a ‘Pied Piper’ like manner on a dark journey including moments when he appear to exist inside a painting; a kind of still life where a man lasciviously consumes a meat filled banquet. He later tells Chloe that he ‘loves meat and sex and art’ in that specific order. This coupling thread of the story reaches a fairly predictable conclusion and is the culmination of the repeated shots through plastic. 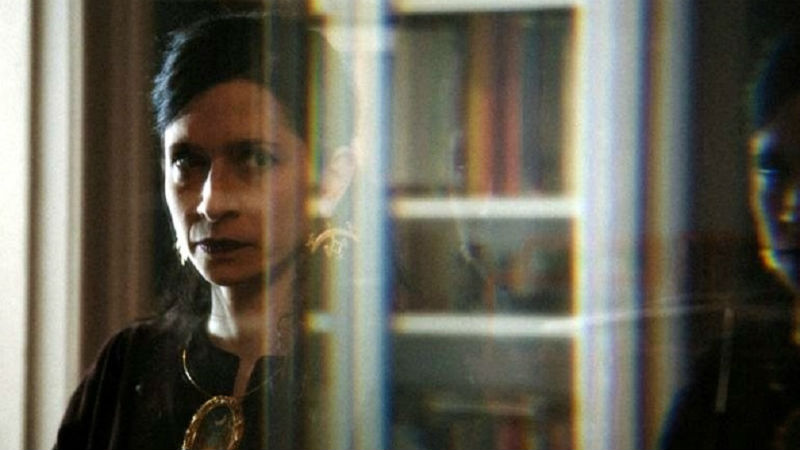 The male figures attempting to influence Chloe’s life, from the mask watching on the wall, to Ludwig as he viciously scratches her, to her fictional father (Helder Macedo) give an Sylvia Plath flavour to the narrative. The voice of the actual Leonora Carrington is a strong counterpoint to the “you have to own your own soul” the artist tells us towards the end of the film. We have been presented very elegantly with a living work of art that leads us to the conclusion that we must not hand over our our female human animal to some half-arsed male.

Chloe tells us at the beginning of her narrative and documentary-type interview that she was “probably born in the wrong century”. Therefore, she becomes the perfect guide in this enchantment of a story.

Female Human Animal is in UK cinemas on Wednesday, October 3rd. Out on VoD on Friday, March 1st.