"Dirty gem"
Japanese animation master crafts a fascinatingly puerile and colourful tale about only child coming to terms with his newly-arrived sister; it's guaranteed to please children and grown-ups alike - in cinemas Friday, November 2nd

The sensibility of a child is not an easy one to transpose onto the silver screen. Our little human beings have an entirely different way of seeing the world, with a very fertile imagination, a lot of curiosity, a certain naivety, but also a touch of callousness. Recreating a child’s world isn’t just about plush and colourful images, toys, fairy dust and pixies. Subtlety and nuance are also mandatory. Mamoru Hosada’s latest film succeeds at all accounts. Mirai is both sophisticated and ingenious, and it’s entirely relatable whatever your age.

A spoiled and pampered four-year old boy called Kun (voiced by Moka Kamishiraishi) is perplexed and indignant at the arrival of his newborn sister Mirai (Haru Kuroki), whose name means “future” in Japanese. His parents (voiced by Gen Hoshino and Kumiko Aso) now have to divide their attention between the two children. The two adults are never named, emphasising that the film is seen from Mirai’s perspective (who simply calls them “mother” and “father”). 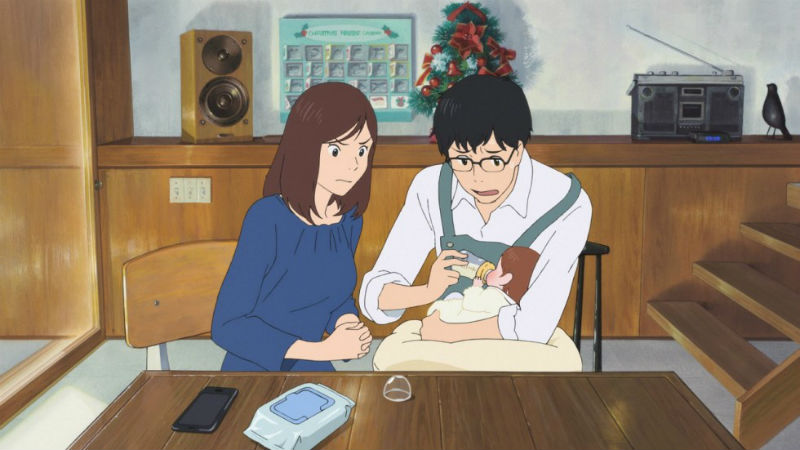 Kun is used to all of the attention to himself, so he’s predictably jealous. Extremely jealous. And angry. Red with anger even. He’s prone to tantrums, which throw the hitherto household into disarray. Sounds banal? Well, it is banal. Until you penetrate Kun’s imagination, which is teeming with action, fantastic concoctions but also very vivid fears. Almost the entire film takes place inside Kun’s house. It’s Kun’s imagination that has the ability to travel very far,

Mirai will transport you back to your early childhood, when reaching a doll or a piece of bric-à-brac sitting on a shelf without attracting your father’s attention was a mammoth quest. Kun has two handy imaginary helpers: a grown-up version of Mirai and his anthropomorphised pet dog. The unlikely trio embark on a very thrilling adventure, and this is just the first of many voyages.

Later on, Kun’s vivid imagination establishes a dialogue and a relationship with his late great-grandfather. He has overheard his parents talk about how his forebear – whom he never met – survived WW2, became disabled and married his great-grandmother. His grandfather represents a connection with the past, while Mirai represents a link with the future (the nominative determinism speaks for itself). Past, present and future mingle together, providing integrity and continuity’s to Kun’s family history. 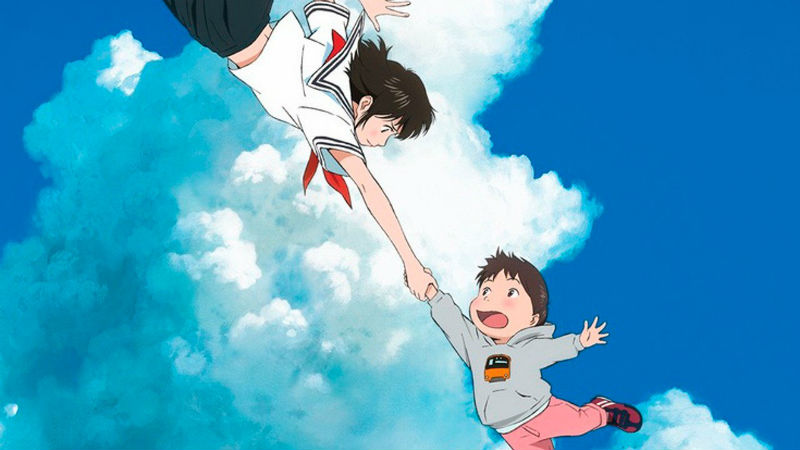 Mirai has at least three subtle yet very significant and pertinent messages to Japan, a conservative country grappling with a demographic implosion (the population is shrinking very quickly). Firstly, the film suggests that it’s good to conceive. Children humanise parents, who become “unflappable”. So let’s have babies! Secondly, the father is caring and doting, and he helps to look after the children. Quite refreshing for a country where men work so hard they never have time for their family. A few years ago, Japan created the annual Beloved Wives’ Day in order to give men the rare opportunity to spend time with their family. Thirdly, the mother is a working mum. Japan has a problem with females giving up their career after they become a mother.

The graphics of Mirai are a delight to watch. They become increasingly soulful and elaborate as the narrative progresses in a tandem with Kun’s imagination. There’s plenty of cuteness, as the opening song suggests (the lyrics cry “cute, cute, cute”, in English). But there’s also plenty of sadness. Enough tears to fill up the Sea of Japan. And there’s a touch of ugliness. The representations of evil and loneliness are quite jarring, even for adults.

Mirai premieres as part of both the BFI London Film Festival (UK premiere) and Scotland Loves Anime (Scottish premiere) in October. It is out in cinemas across the UK on Friday, November 2nd.

The Boy And The Beast (Bakemono no ko)

A tale of two worlds: a young boy is abducted into the parallel Beast Kingdom in order to be apprenticed by their future ruler, then as a teenager becomes torn between the two societies - finally on DVD and Blu-ray [Read More...]

Death through the eyes of a child: Splendid autobiographical drama investigates grief and confusion of six-year-old Spanish girl who lost her mother to Aids - on Mubi on Thursday, January 5th [Read More...]